A highly threatened plant is living on the edge in Russia

A researcher studying a vulnerable plant species in Russia was in for a welcome surprise when he encountered its northernmost population in the country. 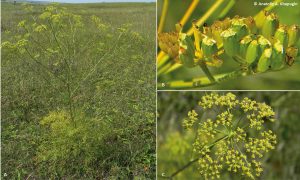 The sole member of its genus, Pepper Saxifrage Silaum silaus has a known distribution from the Iberian Peninsula in the southwest to western Siberia in the east.  Adorned with aromatic, yellow flower clusters, this perennial plant stands 40–100 cm tall and prefers sub-arid conditions within its native range.

In Russia, where Pepper Saxifrage is considered Critically Endangered, one of the northernmost native populations of the species was recorded near Khadzhi Village in the Republic of Mordovia in 2002.  At that time, dense populations of the species occupied the floodplain meadows of the region for around 800 sq. m.  The population at the brinks remained forgotten for 15 years until 2016 when a researcher conducted a study in the area to reveal its current status with respect to its central population.

In the past 15 years, the vegetation cover in Mordovia had significantly succumbed to grazing pressure, which was extremely intense until recently.  This environmental crisis, however, did not seem to have limited the vitality of the Pepper Saxifrage population in the region.  Not only had the species thrived against all odds, but also increased the area it occupied by more than 12 fold since its last record in 2002!

The studied peripheral population also had higher numbers of seeds, though with lower seed mass, as compared to its siblings in the core populations.  These character modifications may represent adaptations to the extreme grazing pressure at the locality.  The large numbers of small, light seeds may have aided easier dispersal by the livestock, which could have been a reason driving the expansion of the population in the region.  This information is crucial in understanding the evolution of the species within its native range.