In pursuit of Faure’s Broom: the wild treasure hunt in Algeria

Anthropogenic activities have led to a considerable recent ecological change in the Mediterranean basin, putting its plant diversity at great risk.  This study presents efforts made to rediscover Faure’s Broom, a narrow Algerian endemic, within its historically reported locality in northern Algeria, and to discuss the possible implications of the findings on the conservation of the area.

The narrow endemics of the Mediterranean

With its lack of protected areas and rapidly losing habitats, the Mediterranean basin is one amongst the most globally threatened biomes.  Although Algeria harbours high levels of floral diversity and endemism that could play an important role in the conservation of the Mediterranean biodiversity, as a developing country, it lacks the financial and technical resources required to tackle the crisis.  Among the plant species that are at great risk in the region, narrow endemics are particularly vulnerable to extinction, owing to their defining characteristics.

The quest to rediscover Faure’s Broom 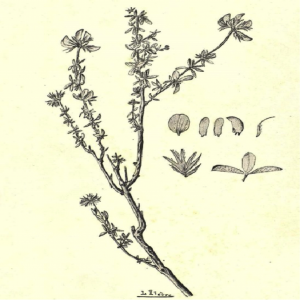 One such narrow endemic, Faure’s Broom Adenocarpus faurei Maire, was first described in 1926 by Dr. René Maire in the valleys of Oued Sidi Khaled in Tiaret, Algeria.  This tall shrub, however, has not been sighted or reported since its first discovery.  Field investigations by Miara et al. aimed at rediscovering Faure’s broom in the wild within an expanded perimeter around its known historical localities.  The comprehensive five-year survey, however, was not successful in recording the presence of even a single individual of Faure’s Broom.  This taxon, therefore, is presumed extinct.

An irreplaceable loss for biological heritage

The most likely factor for the extinction of Faure’s Broom is anthropogenic activities primarily related to urbanization — the wooded valley of Oued Sidi Khaled has been heavily urbanized since Algeria’s independence in 1962.  The lack of regulations and coherence regarding building new properties in many parts of Algeria has led to the destruction of many of its wilderness areas.  According to IUCN data, Algeria has no extinct taxa.  This, however, does not necessarily mean that flora is better protected in Algeria than in other Mediterranean countries.  It rather points to the inability to accurately determine the conservation status of Algeria’s flora due to the lack of novel floristic research in the country since 1962.  Several narrow endemic species may be threatened — or even extinct — in areas that are poorly protected or neglected by authorities.  The case of Faure’s Broom highlights the issues affecting habitually threatened flora and their habitats.