Into the shadows: strategies for survival in ungulates of Malaysia

As ungulatesHooved mammals. form the major prey base for large carnivores, understanding their ecologyThe relationships of organisms with their environment and with each other. can be useful for the conservation of their predators.  The paper by Tan and team provides the first published baseline data of activity patterns of ungulates in peninsular Malaysia, which can be incorporated into future ungulate studies in the area.

Larger carnivores selectively hunt larger prey when available.  Ungulates are likely the major prey base for the Critically Endangered Malayan Tiger in peninsular Malaysia.  A decline in large ungulate prey has been reported to be linked to a decline in tiger populations in the area.  Understanding the status of large ungulate prey in the area is, therefore, important for tiger conservation.

Daily activity pattern can be potentially used to monitor the status of animals.  Activity patterns of terrestrial animals may vary from year to year and may change in response to food availability, hunting, and habitat conversion and fragmentation.  Several studies noted that the activity patterns of mammals were affected by hunting and human disturbance.  Poached species became more nocturnalPrimarily active during the night. in response to high hunting pressure and leopards became more diurnalPrimarily active during the day. in the absence of tourist activity.  A change in daily activity patterns of animals, particularly an increase in nocturnal activity, therefore, can serve as a potential indicator of human disturbance and hunting in an area. 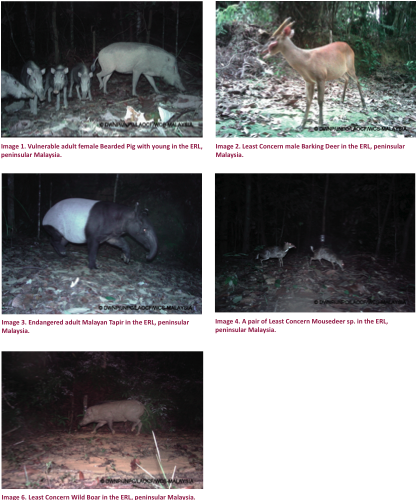 The ungulate species in the Endau Rompin Landscape (ERL) of peninsular Malaysia were studied in 2011, 2013, and 2015 using camera trapsAn effective and non-invasive method to study shy and reclusive large animals..  The captures suggested that the Near Threatened Barking Deer, the Vulnerable Bearded Pig, and the Wild Boar were mostly diurnal, Mousedeer species were crepuscularPrimarily active during twilight and dawn., and the Endangered Malayan Tapir were nocturnal.

The Barking Deer, Bearded Pig, and Wild Boar exhibited two activity peaks, in the morning after sunrise and in the late afternoon around sunset. There appears to be a reduction in activity in the afternoon, which could be driven by a biological requirement to cool their bodies, thus resting in shade or reducing their foragingThe act of searching for food. activity.  Previous studies have noted primates and flying foxes in tropical forests resting and fanning to cool their bodies, respectively, when the mid-day sun was at its strongest.  The lull in activity, however, could also be exaggerated as the camera traps tended to be set up along loggingThe activity or business of felling trees and cutting and preparing the timber. roads and animal trails where shade was limited and hence avoided by the ungulate species.

The Bearded Pig and Wild Boar are known to forage in oil palm plantations that lie adjacent to forests. Considered as agricultural pestsDestructive animals that attack crops, food, livestock, etc., they can be eradicated with permits under the Wildlife Conservation Act 2010 of Malaysia.  The effect of such human activities on these species, however, has not been studied.  If the activity patterns of these ungulate species are a result of such human disturbances, immediate studies would need to be undertaken to investigate the case.