Nilambur Forest Reserve in Kerala, home to Asia’s largest population of Endangered Asian Elephants, experiences frequent events of the Human-Elephant interactions.  The subsequent economic losses and psychological stress and fear affect residents’ tolerance towards elephants, and thereby their attitude towards their conservation.  Since support and cooperation from residents is critical for the long-term sustainability of conservation areas, it is important to assess and understand the attitudes of forest fringe dwellers towards these interactions, and conservation of forest and elephants. 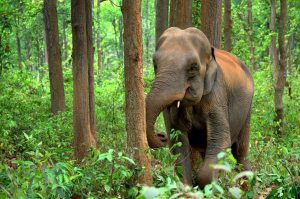 Elephant invasion into human habitations is a common occurrence throughout the range of the Nilambur Forest Reserve in the southern Western Ghats in Kerala.  These negative interactions affect the tolerance of the forest fringe dwellers towards elephants by incurring huge economic losses as well as psychological stress and fear associated with movement restriction and chances of encounters with elephants.  Understanding these attitudes and perceptions, and addressing these issues from people’s point of view, are crucial in fostering the support and cooperation of residents, without which sustainable conservation efforts in the area will fail.

A questionnaire survey conducted by Rohini et al. showed that even in the midst of the interaction issues, the majority of the residents of the area favoured forest conservation owing to its ecological value (87.52%) and extraction benefits (64.1%).  The combination of these non-economic and economic factors, respectively, are critical in maintaining people’s relationship with forests and building positive attitudes towards its long-term conservation.  In the present study, it was observed that people responded negatively towards forest conservation when they perceived that they did not receive economic benefits yet bore the costs associated with conservation initiatives, living with wildlife, and interaction-related stress and losses.

Almost equal proportions of people had positive and negative attitudes towards elephants.  While a favourable opinion towards elephant conservation was mostly due to cultural tolerance and sympathy of villagers towards the species, the unfavourable opinion was attributed to economic and social impacts of conflict incidences.  In such instances, the possibility of a drastic shift towards negative attitudes following spontaneous elephant conflict events can be expected.

It was noted in the present study that although people were aware of the ecological importance of forests, most were largely uninformed about the ecological role of elephants in seed dispersal, energy transfer in the food chain, and ultimately in the existence of forest ecosystems.  It is, therefore, necessary to formulate policies and develop programs to improve conservation attitudes and tolerance of people by specifically targeting on their misconceptions, and making them aware of the current status and ground level realities of natural resource conservation.  Ecological awareness, environmental education, interaction among stakeholders and participatory maintenance of mitigation methods could reduce conflict and contribute towards continued coexistence of people and elephants in this human-dominated landscape.