Elephas maximus indicus, the Indian Elephant, India’s national heritage animal, is loved by all.  Or is it?  Villagers living along elephant reserves face difficulties when it comes to elephants.  Hungry elephants might steal their crops or accidentally wreck their property.  So what do people actually think of the Indian Elephant?  These opinions matter because the Indian Elephant is classified as Endangered, and people’s attitudes will help us understand the best way to conserve them.

Who did they ask?

Nilambur Elephant Reserve is located in Kerala’s Western Ghats, a biodiversity hotspot.  The researchers randomly selected 510 people from 17 villages close to the reserve.  These villagers were asked questions such as: what kind of elephant-caused issues are you facing? which is the most serious one? and, is it necessary to protect elephants and the forest? 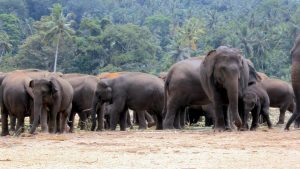 Image 1. A herd of Asian Elephants

Human-elephant interaction is as widespread as the various elephant species themselves.

The biggest complaint against elephants all over the world is crop damage.  The villagers said that elephants preferred the crops jackfruit, plantain, coconut, and areca nut (betel nut), which has led to some farmers having to stop growing these crops.

The injury caused by elephants is very rare, as less than 5% of villagers had reported it.  Many villagers, however, said it was a very serious issue.

Possibly resulting from elephant-caused injury, the most reported issue was fear of elephants and restriction of movement.   Despite its prevalence, this issue was thought of as the least serious.

Although not common, a significant portion of villagers stated that they had experienced property damage caused by elephants, mainly to water pipelines, but also to water wells, fences, gates, and water tanks.  In contrast to this, a separate study conducted in Nepal found that property damage was the most common issue.

Even though the relationship between elephants and humans is often fraught with problems, villagers agree that elephant conservation is a good cause.  Their main reason was that the elephants have a right to live, just like we do.  They also appreciated the conservation of the forest ecosystem because it significantly affects their way of life.  But, the overall attitude towards elephants remained equal parts positive and negative.

Many of the villagers did not know the importance of elephants within the forest ecosystem.  So, to improve conservation, we should educate everybody about how elephants carry out many key services within forest ecosystems.  Learning about all the elephant does could reduce human-elephant interaction and let them thrive together for many years to come.

What are people’s thoughts on Asian Elephants in the southern Western Ghats?

A 14-year-old intern who loves to learn about ecology and biodiversity while educating the public about the natural world.