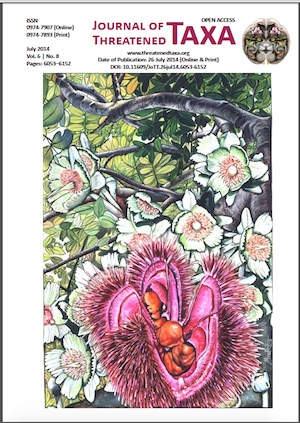 The Indian Sundarbans, part of the globally famous deltaic eco-region, is little-studied for butterfly diversity and ecology. The present study reports 76 butterfly species belonging to five families, which is a culmination of 73 species obtained from surveys conducted over a period of three years (2009-2011) in reclaimed and mangrove forested areas and three species obtained from an earlier report. Six of these species are legally protected under the Indian Wildlife (Protection) Act, 1972. Random surveys were employed for both the study areas, supplemented by systematic sampling in reclaimed areas. The reclaimed and forested areas differed largely in butterfly richness (Whittakerâ€™s measure of ÃŸ diversity = 0.55). For sample-based rarefaction curves, butterfly genera showed a tendency to reach an asymptote sooner than the species. Numerous monospecific genera (77.19% of the taxa) resulted in a very gentle but non-linear positive slope for the species-genus ratio curve. A species-genus ratio of 1.33 indicated strong intra-generic competition for the butterflies of the Indian Sundarbans. Mangrove areas were species poor, with rare species like Euploea crameri, Colotis amata and Idea agamarshchana being recorded in the mangrove area; while Danaus genutia was found to be the most frequent butterfly. Butterfly abundance was very poor, with no endemic species and the majority (53.9% of the taxa; n=41) were found locally rare. The changing composition of butterflies in the once species-poor mangrove zone of the fragile Sundarbans may interfere with their normal ecosystem functioning.