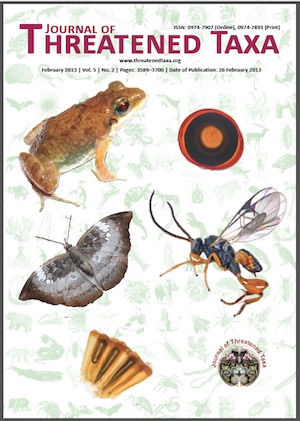 In global consequences of rapidly changing climate and increased amphibian population decline, mapping amphibian diversity in biodiversity hotspots is essential. In this study we have systematically studied anurans of Phansad Wildlife Sanctuary in terms of species diversity, population structure, threat status and distribution. We recorded a total of 22 anuran species, of which 11 species are endemic to Western Ghats biodiversity hotspot. Family Dicroglossidae was found to be more species-rich. Spatial and temporal variation in anuran diversity was observed by using Shannon diversity and evenness indices. Most of the endemic and threatened anuran species are found to be associated with evergreen undisturbed forest patches. Habitat parameters like humidity, forest type, canopy coverage, riparian canopy coverage, stream persistence and litter depth are found to be major variables governing species diversity and distribution. Major anthropogenic threats to amphibians of Phansad Wildlife Sanctuary are discussed along with future conservation objectives. With range extension of species like Fejervarya caperata and Minervarya sahyadris further north in the Western Ghats, taxonomic ambiguities recorded during study are discussed briefly.