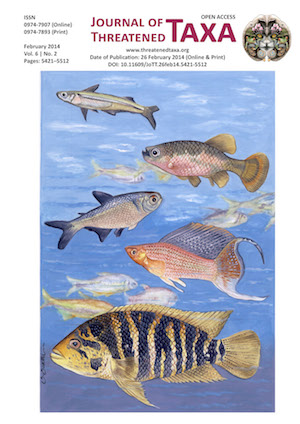 Mangroves are an unique habitat and are largely influenced by sea level changes and wave energy. Foraminifera (Protista) preserved in mangrove sediments provide an excellent proxy for deducing past conditions. One meter deep mangrove core samples at two sites on the western coast of India were collected. The foraminiferal assemblages at various depths showed significant changes in the abundance and diversity down the cores. A total of 59 species belonging to 32 genera, 24 families and five suborders were identified from the cores of these two sites. The cores showed an abundance of genus Rotalidium particularly the species Rotalidium annectans. Other species identified include Ammonia, Elphidium, Nonion, Spiroloculina, Quinqueloculina, Globigerinoides, etc. The pH, organic matter and CaCO3 also showed variations down the cores. There was a lack of correlation between sediment characteristics and the abundance of foraminifera in the cores. The low diversity and differences in distribution of foraminifera compared to surface intertidal samples may be due to intense post depositional changes or anthropogenic disturbances. The mangrove ecology thus appears disturbed by various factors.