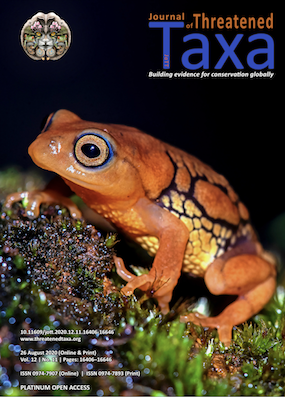 Abstract: The negative interaction between humans and elephants is often referred to as conflict, however it is also seen as competition.  Human-elephant competition (HEC) is a major protection threat in the fringe villages of the Jaldapara National Park (JPNP) of West Bengal, India.  JPNP is facing challenges from the highly populated fringe villages, which exist in elephant corridors.  Between 2015 and 2018 there were 12 elephant deaths.  During the same period elephants caused 34 human deaths.  As per data, most of the elephant interactions occurred in the fringe villages of Madarihat and Jaldapara North Range.  Per reports of human deaths, Chekamari and Khairbari villages of Madarihat Range are in the most vulnerable list.  Most of the human deaths occurred in the early morning (05.00–06.00 h) and in the evening, when people are going outside for open defecation (OD).  On a pilot basis Chekamari and Khairbari villages of Madarihat Range were selected for a door to door household survey with the objective to develop an innovative strategy as a mitigation measure of HEC.  The results of the survey show that both villages are tribal and minority population, the socio-economic condition of the people is very poor, on an average 5–6 members are in each household, the source of drinking water is a community well for most of the households, and 50 households are devoid of toilet facilities so automatically the members of those households go outside for OD.  Out of the total human deaths, 16 occurred in the Madarihat area; out of these 16 cases, six were from the Chekamari and Khairbari villages.  For this reason, between April 2019 to September 2019, with available funds 20 toilets with tube-well were built in the 20 neediest households of these two villages.  Due to the communication with the community, behavioural changes were made and their participation for 100% usage of those toilets was assured.  After the construction of the toilets until now, no human death cases have been reported.