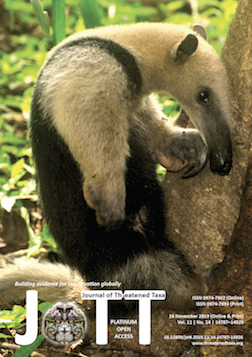 Knowledge of the bat fauna in Nigeria is limited due to use of outdated collection techniques, and infrequent sampling effort.  To advance knowledge of bat diversity in the country, a survey of bats from three localities:â€”Emu, Okomu National Park (ONP), and Ososoâ€”in southern Nigeria was conducted using mist nets set at canopy and at ground level from Februaryâ€“September 2011.  During 28 capture nights involving a total of 202.7 mist net/nights, 239 individuals belonging to 27 bat species in eight families (Emballonuridae, Hipposideridae, Megadermatidae, Molossidae, Nycteridae, Pteropodidae, Rhinolophidae, and Vespertilionidae) were recorded.  A total of 130, 64, 45 individuals of 8, 13 and 11 species were recorded from Emu, Okomu, and Ososo, respectively. Two new country records, Casinycteris campomaanensis and Chaerephon aloysiisabaudiae, both collected from Okomu National Park, are reported for Nigeria.  Whereas the former species was collected in a canopy high stacked mist net setup, the latter was collected in a ground level mist net, demonstrating the value of employing contemporary and complementary sampling techniques especially in such understudied regions of Africa.