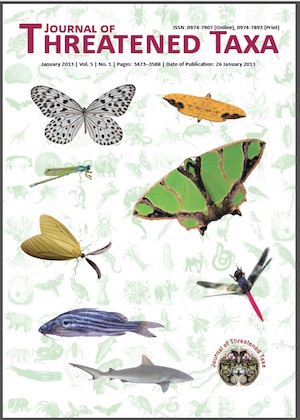 Observations on the Indian Spiny-tailed Lizard Saara hardwickii (Gray, 1827) were undertaken in Tal Chhapar Wildlife Sanctuary, Rajasthan, India during the monsoons (July) following quadrat sampling that was time-constrained. The study revealed that the area is one of the preferable habitats for the species. A population analysis showed that the relative abundance of the subadults was higher, followed by juveniles and adults during the study period. The beginning of activity of the lizards was found to vary over the study period depending on prevailing weather conditions. The activity pattern was bimodal, except across rain events. The study revealed two important ecological findings about these lizards; complete sealing of burrow during rains which differed from partial sealing on normal days and complete diurnal cycle of body colour changes during the monsoon. Feeding was the predominant activity of this lizard followed by basking, resting and chasing each other. The adult lizards were found to be strictly herbivorous, in spite of an abundance of insects available in the area during the period. Subadults and juveniles were found to eat both plant parts, as well as insects. Microhabitat use such as inside grass clumps was found to be higher followed by barren ground, under shade and on stones.