The much-debated issue of the distribution of Water Monitors in northern Myanmar seems to have been resolved with the advent of new photographic evidence from the northwestern parts of the country.

The Water Monitor is one of the most common and widely distributed varanidsLizards belonging to the family Varanidae, most members of which are carnivorous. in southern and southeastern Asia.  Though known to be plentiful throughout Myanmar, the specific localities of the species in the country’s central and northern regions are little known.  The past records of the species from the areas were held to be in error, representing specimens obtained in markets or transported as food.  This assumption was supported when a research team failed to record the species from the areas.  More recently, however, the occurrence of the species was confirmed in north-central Myanmar after a large adult was photographed and locally-collected specimens were found being offered for sale at a market.  These records were taken to represent either an isolated, relict occurrence or the extended range of the giant lizard.

The issue was provided further resolution when a research team obtained two additional photo records of Water Monitors from Sagaing Region within northwestern Myanmar.  In April 2016, a juvenile was photographed basking on a log over-hanging the Nam Pi Lin Stream from a boat.  The Monitor dropped into the water as the boat approached, a typical behaviour exhibited by the lizard when threatened.  Again, in March 2018, a large adult was captured on a game camera deployed along the Chindwin River beside the decaying carcass of a domestic buffalo in a seasonal swamp.  The images showed the brownish carnivore striking a pose usually exhibited when swallowing, investigating the pile of bones in the fetid muck, and moving across and away from the camera. 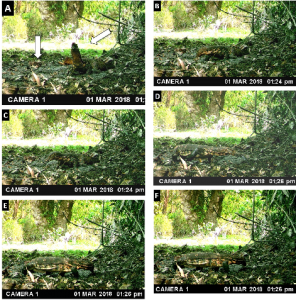 Adult Water Monitor next to the decaying carcass of a buffalo

These field records extend the known geographic range of the Water Monitor approximately 170km northwards and westwards of the records from north-central Myanmar.  Collectively, the records from the region strongly suggest that the distribution of the species extends to northern and northwestern Myanmar, given the lack of apparent geographic barriers.  There seems to be no reason to assume that these records represent an isolated, relict occurrence of the species in the area.  Additional investigation, however, will be required to resolve these biogeographical questions.