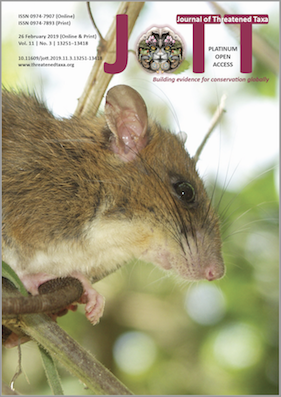 This article reports the uses of primates in a fast-expanding city, and human-primate interactions in the vicinity of a protected area in southeastern Democratic Republic of Congo (DRC).  Surveys in markets, households and restaurants suggested that primate meat is frequently sold and consumed in the city of Lubumbashi.  Carcasses of diurnal monkeys accounted for almost 10% of the total weight of smoked bushmeat sold between March and July 2016 in urban markets, and in 21% of households the last bushmeat consumed prior the date of the survey was of a primate species.  Kinda Baboons Papio kindae, Malbrouck Monkeys Chlorocebus cynosuros and Blue Monkeys Cercopithecus mitis were found illegally kept as pets.  Occasional observations and questionnaire surveys carried out in both the Sector North of Upemba National Park and its neighboring areas, indicated wild populations of these species which were mentioned as â€œpest primatesâ€ by 73% of respondents.  There is no compensation scheme for damages caused by wildlife to crops, and culling problematic animals was listed by a majority (70%) of respondents as the most effective way to repel crop-raiding primates.  Given the current population growth, and considering the increasing spatial overlap between human activities and wildlife, wild populations of these primates are no doubt at risk, but all the three species belong to the Least Concern category on the latest version of the IUCN Red List.  The Blue Monkey is a â€˜partially protectedâ€™ species in DRC, while the two other benefit from less strict conservation measures and their legal status of â€˜non-protectedâ€™ remains.  This situation illustrates the necessity of updating legal status and establishing a Red List of species at the country level.