Copyright: © Oo et al. 2021. Creative Commons Attribution 4.0 International License.  JoTT allows unrestricted use, reproduction, and distribution of this article in any medium by providing adequate credit to the author(s) and the source of publication.

Acknowledgements: We thank all those who assisted with the field study in Hkakabo Razi Landscape. In the UK, we thank the trustees of the Harrison Institute for their ongoing support of our work in Myanmar.  We are grateful to the anonymous reviewers for their most useful comments.

Subsequently, Abramov et al. (2008) provided a comprehensive review of the animal’s morphology, taxonomy, nomenclature, ecology, behaviour, and conservation status and listed over 100 distribution records from northeastern India, including Sikkim, Myanmar, southern China, northern Vietnam, Lao PDR, and northern Thailand. Contrary to Pocock (1941), Corbet & Hill (1992), and others, Nepal was omitted (with justifications).  The paper concluded that it is possible that ‘the species is neither particularly rare nor threatened, rather that it is an inconspicuous denizen of chronically under-surveyed regions.’ It was recommended that ‘all records, even single incidental ones, merit publication’.

In Myanmar, the Stripe-backed Weasel was omitted by Yin (1967). However, some of the earliest records of this species were from Myanmar, including the first outside Sikkim and, if valid, Nepal. Thomas (1891) listed a specimen collected from Thagata, ‘east of Moulmein’ (= Mawlamyine), adjacent to Mount Mooleyit (= Mulayit Taung). Today, Thagata is included in Kayin State but at that time, it was assigned to Tenasserim. This may explain the confusion with Lekagul and McNeely’s (1977) distribution map, which includes the whole of present day Tanintharyi Region (= Tenasserim) and only a ‘?’ where Thagata is located (see Abramov et al. 2008; Chutipong et al. 2014).

Subsequent records from Myanmar are listed in the Appendix of Abramov et al. (2008) and include two localities in Chin State, based on material collected in 1914 and 1915, and a series of localities in Kachin State. Of the 24 Myanmar records listed by Abramov et al. (2008), 17 are for specimens held in the Natural History Museum, London [BMNH] (collected between 1914 and 1938), and one each for the collections of the Field Museum of Natural History, Chicago [FMNH] (collected in 1931) and the Museo Civico, Genoa (collected c. 1885–1889), respectively. The remaining five are remains of dead animals, mostly skins, held by villagers in Kachin State, between 1997 and 2005.

The recent sighting of a single individual in Hkakabo Razi Landscape by TT represents the first observation of the species in Myanmar that includes photographs and video footage. It took place on 07 March 2019, at 0910 h, some 2 km from Atet San Kawng Village, Putao Township, Kachin State (27.433°N, 97.250°E) (Figure 1). The site has an elevation of c. 580 m. This elevation is lower than most other records from Myanmar, which have a range of 90 to 2,135 m and median score of 1,220 m. However, it is more consistent with those from Thailand, Lao PDR, and Vietnam, which when combined, have a range of 130 to 1,750 m (n= 26) and a median of 800 m (data are taken from Abramov et al. 2008). Geographically, the new location lies within the known distribution of the species in Kachin. In Myanmar, except for two specimens from Paletwa, western Chin State (Locality 18 in Figure 1), all the records are from the mountainous areas in the west, north, and east of the country. To date, none has been found in the central areas of the Ayeyarwady and Chindwin river basins (Figure 1).

The photographs show the characteristic pelage of this species, and in particular the diagnostic narrow, almost white stripe that runs from the crown of the head to the base of the tail (Image 1). The video shows a single animal foraging through undergrowth on the ground, searching among dried leaves and litter (Video 1). This seems typical of the species, which is reported elsewhere as being primarily solitary and diurnal in its habits (Streicher et al. 2010; Hobcroft 2011; Coudrat et al. 2014). The area is thickly vegetated and is located in the foothills of a forested mountain range, approximately 20 m from a stream (Image 2). The evergreen forest comprises large trees, shrubs, and bamboo thicket, dominated by Shorea spp., Dipterocarpus spp., and Bambusa spp. The climate is subtropical. Although there is considerable local variation in average temperature and rainfall, in Putao (which is situated close-by) the mean annual temperature is c. 27 °C and the mean annual rainfall is 349 mm (Aung et al. 2017). The video footage complements a previous video by Andy Merk in 2016 in Phu Kieo Wildlife Sanctuary, Thailand, which was posted on Youtube (https://www.youtube.com/watch?v=-sLLUPAvigg). This latter video shows a Stripe-backed Weasel coming to a pool to drink.

The recent photographs are some of very few taken of the animal in the wild, other than by camera-trap, and the first for Myanmar. As with reports from elsewhere in its range (Abramov et al. 2008), the Myanmar individual appears to be either unaware of the presence of humans or not particularly shy. It approached within 5 m of TT and stayed in the area for a considerable period of time. To date, this species has not recorded in camera traps in Myanmar (Zaw et al. 2008). This reflects a similar situation elsewhere in its range (Abramov et al. 2008; Datta et al. 2008; Hunter & Barrett 2018), with single published camera trap records for Lao PDR (Streicher et al. 2010) and Cambodia (McCann & Pawlowski 2018), respectively.

The population status of the Stripe-backed Weasel in Myanmar is not known. However, villagers reported it to be locally common in Kachin (Rabinowitz & Khaing 1998). This anecdotal evidence corresponds to reports in other countries, where villagers also suggest it is at least locally common (Abramov et al. 2008). It is mostly impossible to verify the identifications. Unlike earlier reports from China (Roberton et al. 2016), there is no evidence in Myanmar that it is hunted, although individuals, especially those that depredate domestic chickens, may be trapped and killed by villagers (Zaw et al. 2008). Unlike Lao PDR (Hansel & Tizard 2016), in Myanmar there are no reports of this species being sold in markets.

The incidental sighting reinforces the view that Hkakabo Razi Landscape is a refuge for rich biodiversity, including mammals (Rabinowitz & Khaing 1998; Bates et al. 2021) and birds (Renner et al. 2015). It is also important for a species that is not well covered by camera-trap by-catch (for example from Tiger surveys and monitoring) and for which there is no form of monitoring program anywhere in its range. Therefore, further study of this small carnivore species in Myanmar would be of much interest. 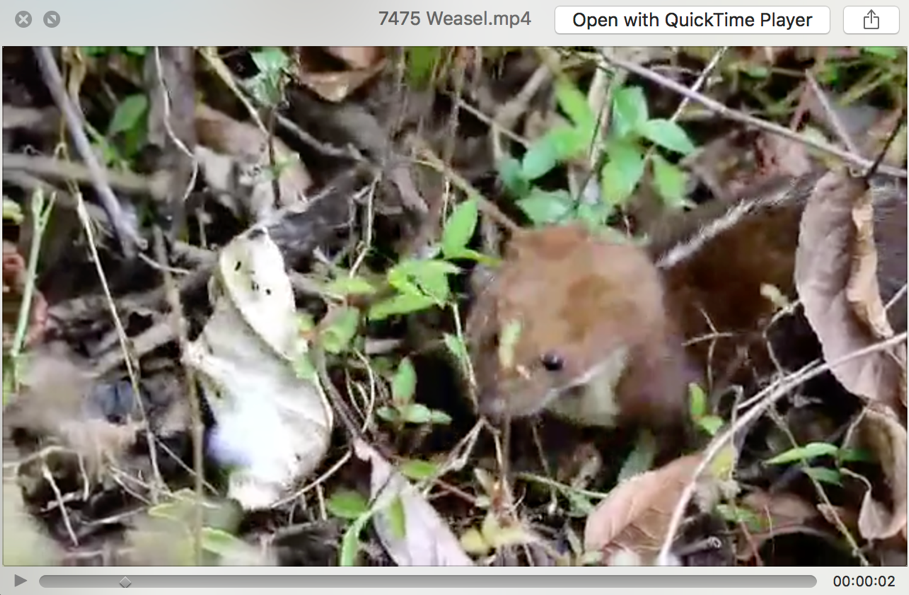 Treesucon, U. (1989). A sighting of the back-striped weasel (Mustela strigidorsa) in northern Thailand. Natural History Bulletin of the Siam Society 37(2): 253–254.