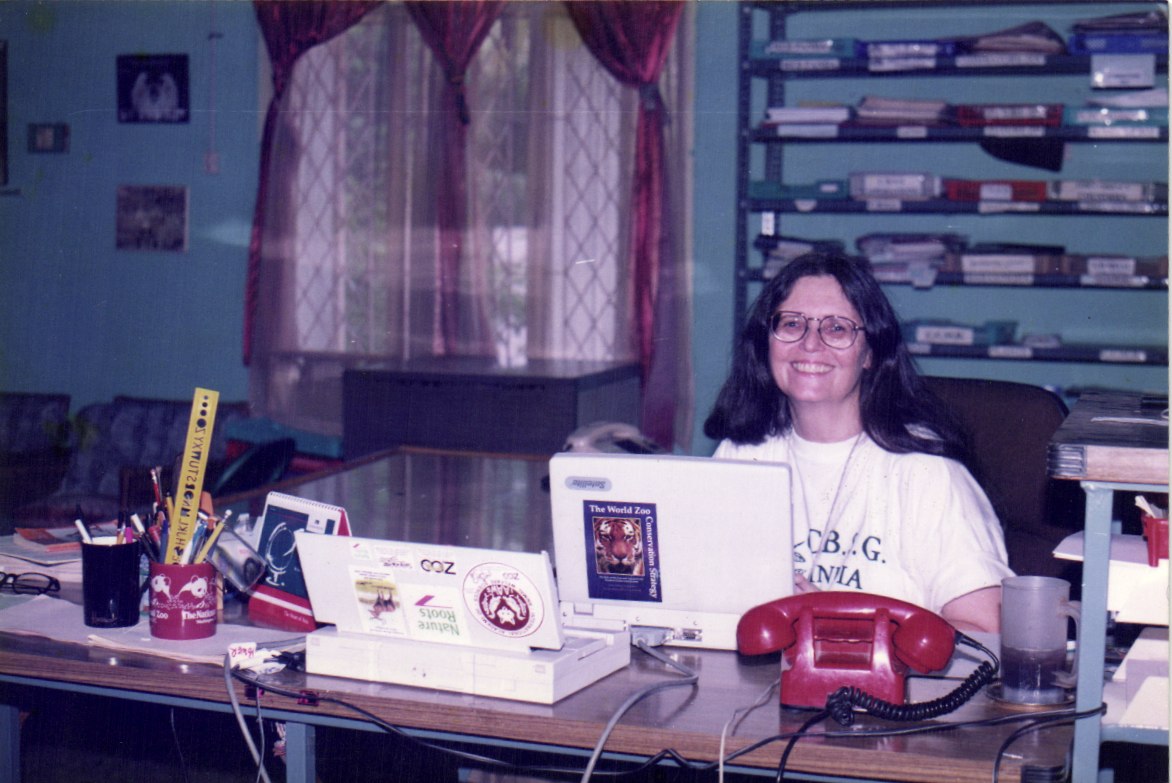 The origins of the Journal of Threatened Taxa goes back to Zoo’s Print, a magazine to promote zoo and animal management in Indian zoos published since January 1986. Sally Walker founded the Zoo Outreach Organization (ZOO) in 1985.  She initiated Zoo’s Print as the second big project after setting up ZOO ZEN, another monthly magazine.

Her task of improving the zoo condition in India was complicated.  More than 500 zoos existed in India.  The animals in the traveling menageries, circuses, performing-animal shows, and street collections were in deplorable conditions of maintenance.

Sally set up the task of tackling this humongous problem systematically. She studied available literature on zoos in India, in the world, and anything related to the zoo world to learn more about the aspect and the situation. She immediately realized the lack of available literature in India, both scientific and popular. Popular material was more easily accessed, for example, Gerald Durrell’s books.  Scientific articles were a completely different ball game in those days. To tackle the problem of non-availability of scientific articles, she started ZOO ZEN.  She compiled photocopies of materials from different parts of the country and the world (of course, having received permissions for this) under different broad categories of animal and zoo management, and sent these out at no cost to all the zoos in India. She also traveled around the country investigating and compiling a list of all the different kinds of animal collections and finally prepared the first comprehensive list of zoos in India. Her database of the zoos updated the existing one with the government of India by increasing their number several times over. And that study led her to start a process to initiate a national zoo policy, which eventually led to the amendment of the Indian Wildlife (Protection) Act and the setting up of the Central Zoo Authority (CZA).

Sally’s methods were not haphazard. Although she was from a non-science background, her keen scientific temper helped her process through the rough and separate factual data from the fictional chaff.  It was an era where record-keeping in Indian zoos was nil (unfortunately, it continues to be abysmal).  She, however, set up studbook-like records for tigers, lions, rhinos, Lion-tailed Macaques, and Sangai.  She visited various Indian zoos and meticulously sifted through old communications, talking with the keepers and querying long-time zoo staff. The studbook-like listing provided critical insights into the provenance of the collections, movement of animals between zoos, hybridization, among other critical components. While she painstakingly compiled all the records, she also reached out to well-managed zoos around the world for help.  She sought help in keeping logs, training possibilities, exchange programs for zookeepers, and capacity building to promote scientific captive breeding protocols in Indian zoos. She trained herself in animal record-keeping and studbook-keeping with the International Species Information System.  She traveled around the zoos to train mid-level officers, biologists, veterinarians, and zookeepers on maintaining careful animal records. She was setting the stage for the next push — minimum standards for zoos under the newly formed CZA.

Sally’s quest for improving standards were stoked from an emotional bond with the animals in zoos. She hated animals in captivity and didn’t like zoos. She did not blindly beat her chest about closing down zoos, nor acted dangerously by promoting the release of animals into the wild.  She took on a rational and scientific approach to help alleviate the unfortunate animal and zoo management practices in India. One might not find many scientific papers published by Sally.  But, if one were to look at some of the science communications in Zoo’s Print, it’s clear how well she understood scientific concepts.  For example, her illustration of the principles of small populations provides glimpses into the principles of conservation biology.

Immediately after setting up the CZA and being a member of it for the first six years, Sally pulled ZOO from pursuing just zoo matters.  She shifted the organization’s focus into conservation planning by setting up the first network of the Captive Breeding (now Conservation Planning) Specialist Group (CPSG) of SSC IUCN in India. The scientific approach by CPSG paved the way for Sally to incorporate scientific tools and models to meta-population management.  She introduced aspects such as reproductive physiology and genetic procedures for captive animals in Indian zoos. Simultaneously, using the predictive models and tools developed by CPSG, Sally initiated stakeholder-led conservation planning exercises for some of the more charismatic animals.  Some examples included the Manipur Brow-antlered Deer, Lion-tailed Macaque, Asiatic Lion, One-horned Rhinoceros, Gharial, Barasingha and Hoolock Gibbon. These workshops determined the probability of extinction of the species in the wild.  They also provided specific management actions to be undertaken for habitats and populations, and initiate a comprehensive conservation breeding program at the national level.

By 1995, after I had joined ZOO, Sally and I introduced and conducted a series of Conservation Assessment & Management Plan (CAMP) workshops, a process developed by CPSG.  We modified the taxon datasheet from the many experiences of CAMP workshops.  We incorporated more aspects of data collection to ease species assessments and included the conservation needs portion into the evaluations. Our experience in those workshops helped us shape the conservation engineering strategy we developed and practice to this date. The conservation strategy included identifying people, building taxonomic networks, training and capacity building, fund field projects, gather data, publish in scientific journals, feed into species assessments, use the data to promote education and outreach, and follow up the strategies in the loop. Sally bought this concept immediately, and we developed everything from training techniques to set up a scientific peer-review journal. The Journal of Threatened Taxa owes its roots to that thought process and conservation engineering strategy.

Sally’s most significant push was education and outreach. She did that with élan. I remember the days when I’d walk into the office in the morning, and Sally would present a complete educational packet that she had worked on the previous night. While I loved to nit-pick, I would often feel bereft of not being able to change anything. Sally, in her typical gesture, would say that she picked up all the facts from the scientific reports I had generated; hence, the product was perfect.  We sent out innumerable education packets to many zoos, NGOs, conservationists, educators, forest departments, academics, institutions, individuals, and others.  Each of them developed from the data compiled from evidence in our workshops, publications, and processes. Science was the basis for all of Sally’s actions; hence, I dedicate this issue in her honor and remembrance. The Journal of Threatened Taxa would not be possible without Sally’s encouragement and complete support. And her philosophy of keeping scientific knowledge free is the reason why JoTT remains a platinum open access international journal.