Copyright: © Murugan & Karthigeyan 2018. Creative Commons Attribution 4.0 International License. JoTT allows unrestricted use of this article in any medium, reproduction and distribution by providing adequate credit to the authors and the source of publication.

Jasminum L., comprising of ca. 200 species, is distributed in tropical to temperate regions of the Old World (Mabberley 2017).  This genus is found commonly in deciduous and evergreen forests as climbing shrubs with flowers generally in white, pink or yellow colours and sweet-scented.

Clarke (1882) in Hooker’s ”The Flora of British India” reported 43 species and 15 infra-specific taxa of Jasminum from India, Burma (now Myanmar), Sri Lanka, Bhutan, Malacca, Tibet, Nepal and Malaya Peninsula.  Srivastava (1987) reported 10 genera, 87 species and 15 infra-specific taxa belonging to the family Oleaceae, in India including the Himalaya, the northeast, peninsular regions, and Andaman & Nicobar Islands.  Among these, 27 are endemic taxa.  A total of 17 taxa of Jasminum are listed under various threat categories (Srivastava & Kapoor 1987).

Balakrishanan & Nair (1981) described J. andamanicum based on the specimens collected from southern Andaman by Dr. King’s collector.  Later, Balakrishanan & Nair (1983) described a new species, J. unifoliolatum based on their collections from Saddle Peak in northern Andaman.  This species was distinguished from J. caudatum by the leaves being mostly unifoliolate, broader, thick-coriaceous, penninerved; panicles densely white-hairy; cymes lax-flowered and corolla tube and lobes being short.  Srivastava (1991) proposed a new name, J. balakrishnanii for J. unifoliolatum as the name was preoccupied and hence an illegitimate later homonym.  Later, Green (2003) synonymized the name J. balakrishnanii and treated it as conspecific to J. andamanicum in his synopsis of the Oleaceae from the Indian subcontinent

While studying some of the old collections of Jasminum housed at CAL, specimens collected by Dr. King’s collector during 1891 and 1892 from southern Andaman were found as unidentified.  On studying their morphological characters, and on consultation with the type specimens and relevant literature, they were identified as Jasminum andamanicum.  It is interesting to note that these collections were made three years before the holotype collection.  Also, one of the specimens was collected from a different locality, from where this species has never been reported earlier, until now.  The present article provides a detailed description of the species, image of the one of the old specimens collected prior to the type collection, and a distribution map (Fig. 1) of this rare, endemic species.  The species is evaluated as per the recent IUCN Red List Category and Criteria version 3.1 (IUCN 2018).

Other than Saddle Peak National Park in North Andaman Island, the habitat quality of other places of collection of this species has degraded to a large extent as they are under extreme pressure from human interference, as they do not fall under any protected area.  The quality of habitat in these places also face serious threat due to developmental activities like the construction of a dam in Dhanikhari, tourism activities, and grazing by herbivorous animals.

The species is assessed here as Endangered [B1ab(iii,iv)+2ab(iii,iv)] as per the IUCN Red List of Threatened Species guidelines version 3.1. 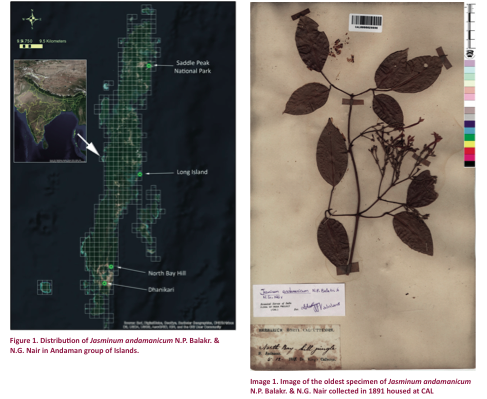