Copyright: © Wagh et al. 2018.Creative Commons Attribution 4.0 International License. JoTT allows unrestricted use of this article in any medium, reproduction and distribution by providing adequate credit to the authors and the source of publication.

Acknowledgements: The authors PW and SK are thankful to the Principal, New Arts, Commerce & Science College, Ahmadnagar for facilities.  We are grateful to Dr. Kailash Chandra, Director, Zoological Survey of India, Kolkata and to Dr.P.S. Bhatnagar, Scientist-D & Officer-in-Charge, Zoological Survey of India, Western Regional Centre, Pune for facilities and encouragement.

Nandur-Madhmeshwar Wetland (NMW) is located at Khangaon Thadi Village (20.0080N & 74.1310E),Niphad Tehsil of Nasik District of Maharashtra (Fig. 1).  A stone weir was constructed during 1907–1913 across the river Godavari just below the confluence of Kadava and Godavari Rivers at Nandur-Madhmeshwar.  The water released from Godavari and lake Beale (Darna) reservoir is stored at Nandur-Madhmeshwar and subsequently released through canals for irrigation.  Silt and organic matter that are carried away with water flow accumulate in the lake, due to which islands and shallow water ponds have been created.  This resulted in the biologically enriched conditions by which aquatic vegetation has been stabilized.  Huge amounts of silt have been deposited in the dam since 1913; consequently much of the lake is now marshland or very shallow water.  Because of its outstanding ecological, faunal, floral and zoological significance the area was declared a sanctuary in 1950.  The sanctuary has interspersed grasslands with semi-evergreen forests.

Even though some studies are available on the fish fauna of Godavari River, information on the fish fauna of NMW is limited.  David (1963) studied fishes of the Godavari River but did not provide any collection data.  Khedkar (2005) and Yadav (2005b) studied the fishes of Nathsagar wetlands, Jaikwadi on Godavari River, Paithan, Aurangabad.  Recently, Maharashtra Pollution Control Board and Central Institute of Fishery Education (MPCB & CIFE 2011) studied the fishes by selecting various sites of the Godavari River including Nandur-Madhmeshwar wetland and reported 24 species from this wetland.  The present study conducted a detailed survey in the wetland area.  The study aims to ascertain the distribution and abundance of fishes and to identify threats so as to provide conservation measures.

We collected the fishes from the wetland (outside the sanctuary area) during 2010–2012.  Fishes were collected by hand net, cast net and also obtained from local fishermen.  Fishes were preserved in 4% formalin and identified using available literature (Jayaram 1991, 2010; Menon 1987, 1992; Talwar& Jhingran 1991; Jayaram& Dhas 2000; Jayaram& Sanyal 2003).  The fish specimens are deposited in the museum collection of the Western Regional Centre, Zoological Survey of India, Pune (Accession No. ZSI/WRC P/5397 to P/5435).  Assuming that the fishing effort for a given type of net was constant, the relative abundance of the fish was grossly classified into four categories as given by Dahanukaret al. (2012), namely abundant (76–100 % of the total catch), common (51–75 % of the total catch), moderate (26–50 % of the total catch), and rare (1–25 % of the total catch).

Thirty-nine fish species belonging to seven orders, 14 families and 30 genera were recorded from the study area (Table 1).  Cypriniformes was the most dominant order contributing 20 species followed by Perciformes seven, Siluriformes seven, Synbranchiformestwo and Osteoglossiformes, Anguilliformesand Beloniformes one species each.  Cyprinidae was the most dominant family representing 17 species followed by Channidae three and Bagridaethree.  Some of the fishes collected from NMW are shown in Image 1.  Of the total fish species obtained, 19 fish species were found to be common, out of which 11 had a uniform distribution throughout the study period in different months.  Sixteen species showed moderate abundance while one was rare. Three invasive alien species were also recorded from the study area namely, Cyprinus carpio,Clarias gariepinusand Oreochromis mossambicus.  The introduction of alien species causes serious threat to native fish fauna with regards to competition for food, predation and disruption of the aquatic food chain (Daniels 2006; Raghavan et al. 2008; Knight 2010).  The list includes typical primary freshwater fishes. 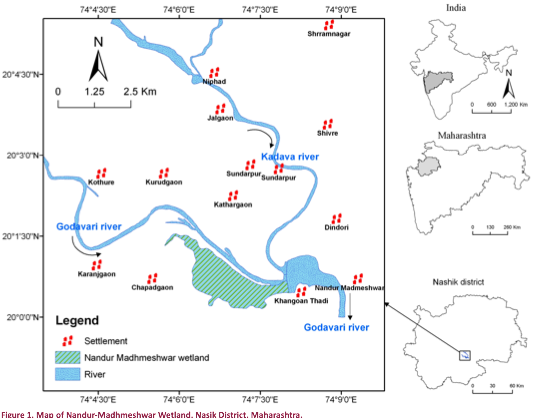 Notopterus notopterus is quite common in some areas of the wetland.  Some specimens of N. notopterus resemble Chitala chitala externally, hence MPCB & CIFE (2011) presumably consider them as C. chitala, but our study suggests that it is just the lack of understanding of taxonomy and incorrect identification of species. C. chitalarecords from Maharashtra are misidentifications of N. notopterusand C. chitala is distributed only in the Ganges and Brahmaputra basins of northern India (see Chaudhry2010).  The two species of genus Salmostoma, namely, S. bacailaand S. balookee are abundant in rainy season and found in turbid waters where vegetation is rich.  Rasbora daniconius and Devario malabaricus have been found in adjacent canals and rocky pools.  Both the species are common.  The specimens of Puntius amphibius, P.sophore, P. chola, and Pethia conchoniuswere caught from the adjacent canals, rocky pools and from the banks of the river where grassy vegetation is abundant, but these species have low food value in the local market.  MPCB & CIFE (2011) reported Pethia shalynius and P. phutuniofrom the study area, but we could not collect these two species from the study area.  Further, we collected some specimens of P. conchonius having dark bases on their scales and the dark spots coalesce with these dots. Presumably, MPCB & CIFE (2011) in their list designated these specimens as P. shalynius, but at present, on the basis of morphological characters we consider them as P. conchonius.  In spite of that, P. shalynius is endemic to Manipur, northeasternIndia and our observations suggest that this species is not present in this wetland.

The Critically Endangered Parapsilorhynchus prateri (Dahanukar 2011) reported by MPCB & CIFE (2011) from NMW is quite interesting.  We could not collect P. prateri from this wetland.  The species is truly hill stream and its occurrence in NMW needs confirmation. Although Labeo rohitaand Catla catlaare commercially significant in the local market, their population in the area is rare.  Further, our observations indicate that in this wetland there are very good populations of fish species, namely: Ompok bimaculatus,Wallago attu,Notopterus notopterus, Mystus malabaricus, Mastacembelus armatus, Heteropneustes fossilis, Channa punctata, Channa marulius and Garra mullya.  We have also collected two specimens of Spotted Snakehead albino fish Channa punctata, which is already reported elsewhere (see Jadhav et al. 2013).

MPCB & CIFE (2011) reported 24 species from NMW, out of which nine species were not recorded in our study namely: Chitala chitala, Pethia shalynius, P. phutunio, Ompok malabaricus, Parapsilorhynchus prateri, Salmostoma novacula, Rasbora labiosa, Macrognathus aral, and Strongylura strongylura.  The occurrence of the species C. chitala, P. shalynius, P. prateri, and S. strongylura needs confirmation as stated earlier. S. strongylura is a marine species and does not come that far inland and is likely a misidentification of Xenentodon cancila. Nevertheless, in our study 21 species were reported for the first time from this wetland.  Out of these, 15 species were identified as commercially important and fetch a good market price.  One of the greatest assets of this wetland is not only is it a good habitat for birds but also provides good fishing opportunities for fishers and also for local tribalsfor their livelihood.

The fish fauna of the wetland is threatened due to introduced species as well as anthropogenic activities.  Heavy siltation is causing the reservoir to fill up gradually.  Excessive fishing and grassland patches of the sanctuary area are overgrazed by domestic buffaloand cattle facilitate the spread of invasive alien plants.  Invasion by exotic plants Eichhornia crassipesand Parthenium sp. is serious and need to be removed.  Diesel engines, which are used along with electric pumps to draw water, cause immense pollution in the area (Kumar et al. 2002).  The avifauna of the area is considerably disturbed because of blasting undertaken in the area for mining purposes. The reservoir surroundings are intensively cultivated for wheat, maize, sugarcane and vegetables.  For the conservation of the valuable biodiversity of the wetland, awareness programmes should be conducted among the local people.  Grazing activities in the wetland area should be controlled.  To protect these ecologically important areas, the surrounding areas need to be declared as an eco sensitive area, for the better conservation of biodiversity. 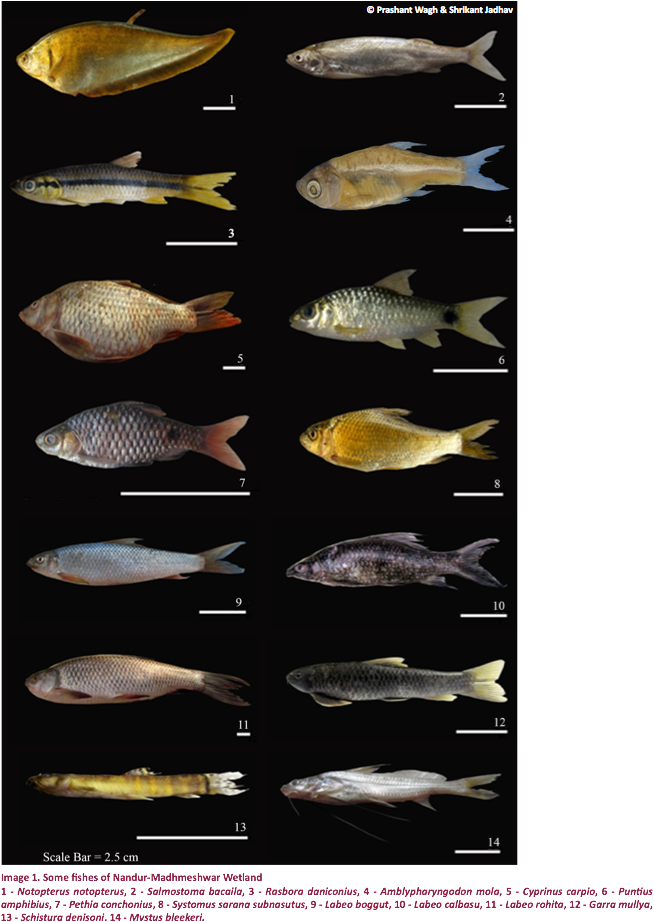 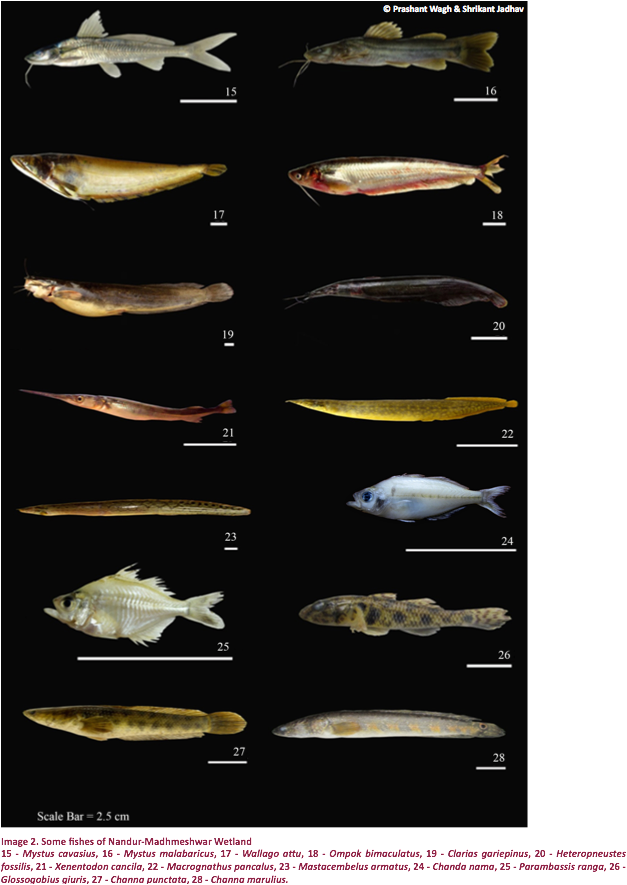 Jayaram, K.C. & J.J. Dhas (2000). Revision of the genus Labeo from Indian region with a discussion on its phylogeny and zoogeography. Occasional Paper No. 183. Records of the Zoological Survey of India, Kolkata, 143pp.

Jayaram, K.C. & S. Sanyal (2003). A taxonomic revision of the fishes of the genus Mystus Scopoli (Family: Bagridae). Occasional Paper No. 207. Records of the Zoological Survey of India, Kolkata, 136pp.