Copyright: © Patel et al. 2018. Creative Commons Attribution 4.0 International License. JoTTallows unrestricted use of this article in any medium, reproduction and distribution by providing adequate credit to the authors and the source of publication.

The study of wood inhabiting macrofungi was carried out during October 2017, in the central Western Ghats region of ShivamoggaDistrict, in Karnataka State.  An interesting wood inhabiting macrofungus belonging to the family Nitschkiaceae was collected.  A critical microscopic study revealed that it is a hitherto unrecorded species from India and hence the note (Bianchinotti 2004; Huhndorf et al. 2004; Mugambi & Huhndorf2010).

The field survey was conducted in Jambekoppa locality (14.105972220N & 75.143055560E) of Shimoga (Shivamogga) District forest regions.  This deciduous forest is known for varied macrofungal biota.  Sporocarp were observed, photographs were taken in their natural habitat, field notes were taken along with their geographical ranges (Garmin-650) and samples were collected with substratum, brought to laboratory, anatomical characters were studied using a compound microscope. Classical taxonomy was followed for the characterization of species.  The name of the taxa was authenticated and confirmed by using http://www.mycobank.org and http://www.indexfungorum.org/names/names.asp.

Nitschkia macrospora was proposed by Teng (1934) from China. Vasilyeva et al. (2010) reported the species from Russia, and Pande (2008) studied the genus Nitschkia in India and this species forms an addition to the fungi of India. 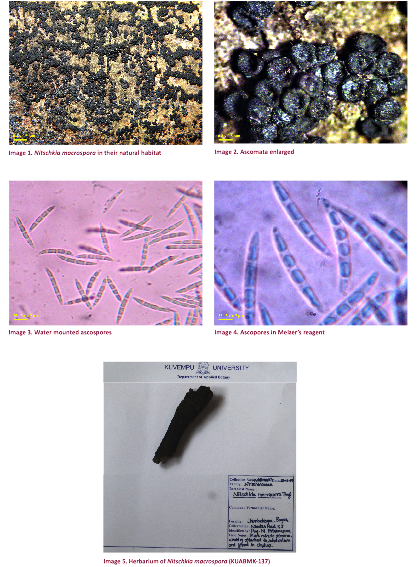