Distribution and population status of Sambar Rusa unicolor  (Mammalia: Cetartiodactyla: Cervidae) from Aravalli landscape with a note on its first record from Aravalli Hills of Haryana, India

Copyright: © Jain et al. 2018. Creative Commons Attribution 4.0 International License. JoTT allows unrestricted use of this article in any medium, reproduction and distribution by providing adequate credit to the authors and the source of publication.

Acknowledgements: We are thankful to the Haryana Forest Department for providing financial assistance for the study and permits for surveys, camera trapping, and monitoring of the landscape.  We acknowledge the administrative support of the forest department.  We also thank Dr. Amrinder Kaur (PCCF), Sh. Rambir Singh (CF), Sh. M.D. Sinha (CF), Sh. R. Anand (DCF), Mrs. Renjitha MH (DCF), and all other people who helped and guided us during the study.  We are deeply thankful to the Rajasthan Forest Department for providing census data and information.  We thank Dr. Satish Kumar Sharma and Rahul Bhatnagar for providing the required information.  We also give our thanks to Sh. Raja Tehsin and Dr. Sunil Dubey for providing the necessary guidance.

Abstract: Sambar is the most widespread deer in Southeastern Asia and is listed as Vulnerable in the IUCN Red List.  In this communication, we report the results of an extensive literature review and camera trapping to present the historic and current distribution of Sambar in Aravalli Mountain region.  The records state that the species is nearly exterminated in the protected areas of Gujarat Aravalli and bordering areas of Rajasthan, although a sizable population still survives in northern and central Aravalli (Pali-Rajasamand-Udaipur & Alwar-Sawai Madhopur region).  We also report the first record of Sambar from the Aravalli Hill region of Haryana.

Distribution in southeastern Asia and India

Aravallis extend from -Gujarat and Rajasthan in the southwest and to Haryana and Delhi in the northeast.  The study area selected was the Aravalli region of the Haryana landscape, which lies between 28.580N–27.650N & 75.910E–77.160E (Fig. 1).  Haryana is bound by Aravalli in the south-west region.  The northern point of the range continues as isolated hills and rocky ridges into Haryana State, ending in Delhi.  The famous Delhi Ridge is the last leg of the Aravalli range, which traverses through southern Delhi and terminates in central Delhi where Raisina Hill is its last extension.  Sites in five divisions, namely, Mahendragarh, Rewari, Faridabad, Gurgaon, and Mewat, were extensively surveyed for mapping land use area/ land cover pattern and the status of key wildlife species.

Sign surveys and line transects were conducted in 51 sampling sites spread over five forest divisions for a period of four months (January–April 2016).  Vegetation variables like floral diversity were also recorded to compare the habitat characteristics of each site.  Opportunistic camera trapping was later conducted in October 2016 in two districts: Gurgaon and Faridabad.  To get basic insights into the presence of mammalian species in the region, 360 camera trap nights (12 cameras for 30 days) were deployed.  The sites selected to put cameras were Bhondsi (one), Gamroj (one), Manger (four), Bandhwari (two), Wazirabad (two), Gothda (one), and Anagpur (one).

There is currently no reliable and detailed information on the distribution of Sambar from the entire extent of Aravalli hill range.  In the absence of such ecological information, proper research and management is difficult.  Hence, to fill the information gap, records on the distribution of Sambar in three states, Rajasthan, Gujarat, and Haryana, were collected and compiled.  No records of the natural population from Delhi NCR have been reported as of now.  Though there are occasional records of Sambar sightings and rescue operations from Delhi NCR (Anonymous 2016),  these do not confirm the areas where they actually occur.  Present numbers and early records were collected from census records of respective forest departments, state gazetteers, and available publications.

First record of Sambar from Aravallis Haryana in Gurgaon District

Images of Rusa unicolor on two consecutive days in October were recorded from Bhondsi Village in Sohna (Fig. 1 & Image 1).  Bhondsi in Gurgaon District has an extremely rich forest habitat which still remains ignored by conservationists.  Until now, Rusa unicolor in Haryana had been reported only from the Shivallik ranges (northern Haryana).  They are known to occur in Morni Hills in Panchkula District (Anonymous 1892) and Kalesar National Park in Yamunanagar District (Habib et al. 2015).  This postulates for more intensive monitoring of the species and its distributional status.

The Aravalli extends its northeastern portion to Gujarat covering the districts Banaskantha, Sabarkantha, Aravalli, Dahod, Panchmahal, and Vadodra.  Rusa unicolor, although present in large numbers earlier, has disappeared from this region of Aravalli Hills.  Jumbugodha Wildlife Sanctuary abounded in Sambar but now they have gone extinct. Jambugodha area was managed by an old state ruler.  Tigers, panthers, sambars, deer, bears, wild boars, and antelopes were present here (Mehta et al. 2002).  Earlier records have been reported from districts Banaskantha (Ryley 1914), Sabarkantha (Rajyagaor 1974), Panchmahal (Patel 1972), and Vadodra (Anonymous 1979).  Description of Sambar from Jessore Wildlife Sanctuary in the faunal list has been described in a booklet released by Gujarat Forest Department (Anonymous 1984).

In certain protected areas, however, the population of Sambar has been locally exterminated.  Fauna of protected areas of Rajasthan and Gujarat by Zoological Survey of India (Kumar 2012)  stated its presence in sanctuaries such as Bhainsrodgarh, Shergarh, Ramsagar, and Van Vihar (Table 1).  Wildlife census of Rajasthan records (2011–2017) suggests this species is now absent from these areas.  According to census records, Sambar was last recorded in Bhainsrodagarh in 2010 (n=2) and in Ramsagar (n=29), Shergarh (n=36), and Van Vihar (n=23) in 2007.  Although the census record states that Sambar is extinct from Phulwari Ki Nal Wildlife Sanctuary, one record exists in biodiversity assessment survey by FES in 2010 (Anonymous 2010b).  Sambar once also existed in Jaisamand Wildlife Sanctuary and got exterminated around 1997 (Dubey 2011).  The last record of Sambar in Jaisamand as per wildlife census is of 1995 (n=5).

Aravalli region of Haryana exists in districts Gurgaon, Faridabad, Mewat, Mahendargarh, Rewari; some remnants of the range also exist in Bhiwani.  The habitat in this region is declining rapidly due to rapid deforestation and development activities.  The forests in the state are the least studied in the entire extent of the Aravalli hills.  So far no records of any sighting of Sambar exist in this region.  The record -stated above (Image 1) is the only present record from Aravalli region of Haryana.

Aravalli in Haryana still remains one of the least studied landscapes.  It has been recognized as a potential habitat for diverse species of biodiversity.  It has been facing massive deforestation and denudation over the last decades.  The forests of Aravalli range in Haryana are now the most degraded forests in India — most of the indigenous plant species here have disappeared; however, these areas are biologically rich and support unique elements of flora and fauna.  The presence of Sambar in Aravalli landscape of Haryana signifies that the area still harbours important wildlife species that warrants immediate protection.  It gives direction for future research studies to systematically monitor and identify the still undiscovered mammalian biodiversity.  These ancient mountains hold several threatened species (Habib et al. 2017) that need urgent conservation programs. 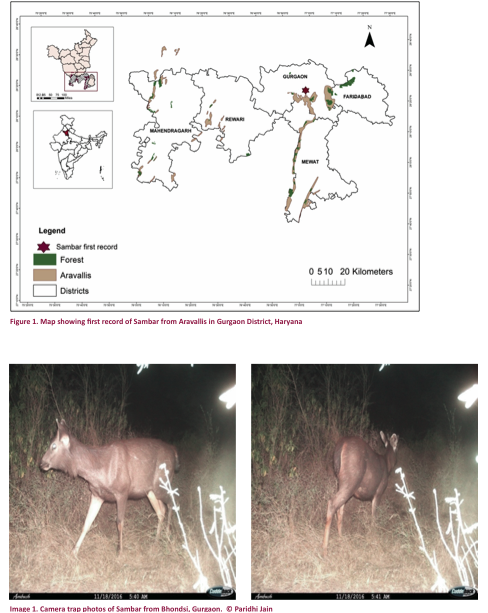 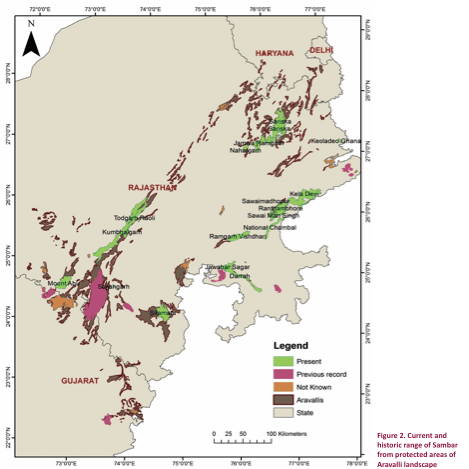