First record of a trogid beetle (Coleoptera: Scarabaeoidea:Trogidae) from the Western Ghats, India

Copyright: © Kalawate & Patole 2018. Creative Commons Attribution 4.0 International License. JoTTallows unrestricted use of this article in any medium, reproduction and distribution by providing adequate credit to the authors and the source of publication.

Acknowledgements: The authors are grateful to the Director, Zoological Survey of India, Kolkata and the Officer-in-Charge, WRC, ZSI, Pune for facilities and encouragement. Thanks are extended to Riccardo Pittino, Natural History Museum of Milan, Italy and Werner Strumpher, Agricultural Research Council, Pretoria, South Africa for help in confirmation of identification. Authors are grateful to Ales Bezdek, Biology Centre CAS, Institute of Entomology, Branišovská 31, CZ-370 05 České Budějovice, Czech Republic for providing the relevant literature.

Trogidae is a small, cosmopolitan family consisting of about 300 species (Scholtz1986a; Smith 2003; Pittino 2006; Zidek2013, 2017).  The family name Trogidae was proposed by MacLeay (1819). Trogid beetles are commonly called hide beetles (Houston 2010), and keratin beetles (Strümpheret al. 2014).  The beetles of this family are necrophagous (Scholtz1986b) and are of forensic importance. These insects utilize a wide array of food containing keratinous material.  They feed on carcasses and are the last among other groups of organisms to feed on the carcass.  They have been reported feeding on bat guano in caves, locust eggs, fly maggots and also on products which contain animal keratin, like an old carpet, coat, etc. (Scholtz 1986b).

These are the only members of this type of feeding habit (keratinophagous) from Scarabaeoidea.  Adults lay eggs in soil under the food source.  The larvae feed on that food source after hatching.  The larva completes three instars in about four weeks, it stops feeding and prepares a light cocoon of agglutinated soil, where the pupation takes place (Verdugo 2014), and pupates for about two weeks.

Many adults of this family are attracted to light at night.  Trogidsare considered primitive in the superfamily Scarabaeoidea(Crowson 1954, 1981).  The insects of this family are of forensic importance, and are being utilized to estimate post-mortem intervals in legal investigations of the human body (Tabor et al. 2004).  India harbours a very rich Trogidae fauna, but work carried out on this family is less in comparison to other parts of the world. The Oriental trogid fauna was studied by a few researchers (Blackburn 1904; Arrow 1927; Haaf 1954a,b; Scholtz 1980, 1986b, 1990; Pittino 2005) and the world trogid fauna was catalogued by Zidek(2013, 2017).

It includes five genera viz. Trox Fabricius, 1775; Polynoncus Burmeister, 1876; Omorgus Erichson, 1847; Glyptotrox Nikolaev, 2016 and Phoberus Macleay, 1819 (Zidek2017).  The first trogid was described and named as Scarabaeus sabulosus Linnaeus 257 years back (Strümpher et al. 2016).  The subfamily Omorginae Nikolajev, 2005 is monophyletic, and the members of this subfamily have elongated antennal scape and the metatibialspur is as long as the first two tarsomeres (Strümpher et al. 2016).  As per Strümpheret al. (2016), Afromorgus was described as a sub-genus of Omorgus by Scholtz (1986a), which was elevated to the genus level by Pittino (2006), but again considered as a subgenus of Omorgus (see Zidek2013).  At present, 13 species of Trogidae are known from India (Zidek2013, 2017) (Table 1).  The present study documents the occurrence of the trogid beetle from Maharashtra for the first time (Table 1), they have been reported from the other parts of India.  As mentioned earlier, the work on this family of beetles of forensic importance is negligible in India.  The objective of the present study is to provide a new distributional record of Omorgus (Afromorgus) italicus.

The material (single male) was collected from Sakri Taluka, DhuleDistrict, Maharashtra, India, by the second author.  The specimen was brought to the laboratory, dried and pinned.  The dried specimen was studied under Leica EZ 4 HD stereozoommicroscope.  The identification was done with the help of relevant literature (Haaf 1954a;Reiche 1853; Scholtz 1986b, 1990).  The structure of the genitalia was compared with the line diagram of genitalia given by Haaf (1954a). The terminology used for describing morphological features and male genitalia follows Scholtz (1986b, 1990).  The identified specimen was labeled, duly registered and deposited in the collection of Zoological Survey of India, Western Regional Centre, Pune, Maharashtra, India (ZSI-WRC-ENT-1/2638). The known distribution of this species was verified from the checklist of the world Trogidae (Zidek2013, 2017).  The survey locality has been mentioned under material examined and also shown in Fig. 1.  The survey locality map was prepared using the open-free access QGIS software.

Male aedeagus was dissected from the abdomen and kept in 10% KOH solution (at room temperature) for 30 minutes for softening of the sclerotized portion.  The specimens were studied, photographed and measured using a Leica EZ 4 HD stereozoommicroscope with Leica application suite, Version 3.0.0.

Systematic account of the species along with material examined, description and distribution in India as well as outside India with the description of male genitalia are discussed and illustrated here. 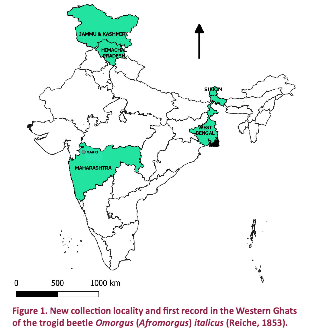 Description: (Image 1 A, B) Length about 14mm, width about 7mm; Colour: Black

Pronotum punctate throughout, sides broad; the pronotal width narrower than the elytral width; lateral margins of pronotumsmooth, setose, anterolaterally with thin margin; posteriorly furrowed; the discal area raised in the middle, punctate; posteriorly two raised tubercles on each side of the disc.

Scutellum hastate, constricted at the base (Image 1C). 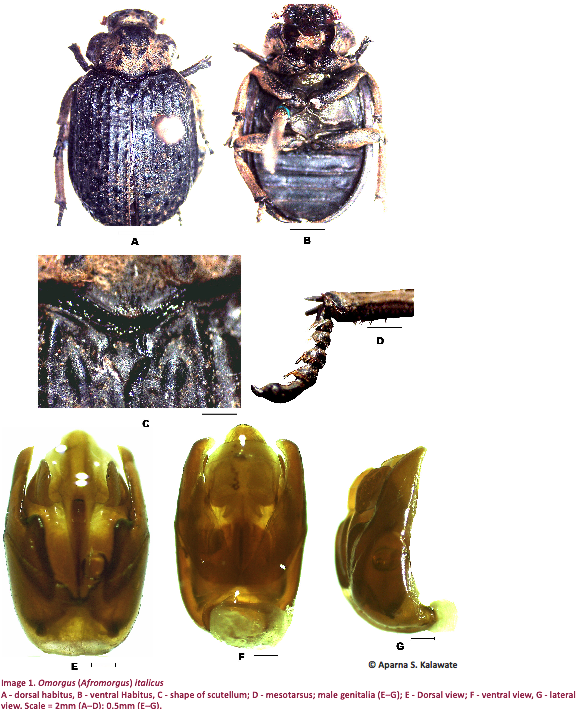 Blackburn, T. (1904). Further notes on Australian Coleoptera, with descriptions of new genera and species 34. Transactions of the Royal Society of South Australia 28: 281–297.

MacLeay, W.S. (1819). Horae entomologicae; or essays on the annulose animals. Containing general observations on the geography, manners, and natural affinities of the Insects which compose the genus Scarabaeus of Linnaeus; to which are added a few incidental remarks on the genera Lucanus and Hister of the same author. With an appendix and plates. Vol. 1, Pt. 1. S. Bagster; London, 160pp.