Abstract: Assessment of length-weight relationship (LWR), length-length relationship (LLR) and condition factor was carried out for Bangana dero in northeastern India, mainly from the Brahmaputra and Irrawaddy (Manipur) River system.  We report a value of ‘b’ 3.1269 and 3.1426 for LWR with respect to total length and standard length respectively, indicating positive allometric growth. The value of ‘b’ for LLR is less than one, which indicates that growth in total length is less with per unit increase in standard length.  The value of ‘K’ and ‘Kn’ is 0.91 and 0.72 depicts normal well being of fish in its habitat.

Copyright: © Yadav & Dhanze 2018. Creative Commons Attribution 4.0 International License. JoTTallows unrestricted use of this article in any medium, reproduction and distribution by providing adequate credit to the authors and the source of publication.

Author Details: Kamlesh Kumar Yadav, a M.F.Sc. student is working on “Biosystematicstudy of the genus Bangana (Hamilton, 1822)” from northeastern India.  Dr. Rani Dhanzeis Professor & Head in Department of Fishereis Resouce Management, COF,CAU(I), Lembucherra, Tripura. Her field of specialization is fish and fisheries. She is at present engaged in taxonomy and systematics of fresh water fishes.

Author Contribution: First author conducted the present study and prepared the manuscript as a part of his M.F.Sc. thesis under the guidance of second author.

Acknowledgements: The authors would like to express sincere gratitude to the Dr. P.K. Pandey, Dean, College of Fisheries, CAU (I), Tripura for providing necessary facilities and technical support to conduct present study. We are also indebt to the Department of Biotechnology (DBT), Government of India and COE-FAB project for providing financial assistance in sample collection and further study.  We are also thankful to Dr. J.R. Dhanze, Consultant COE-FAB Project for critically scrutinizing this manuscript and providing valuable suggestion. First author is also thankful to all his advisory committee members of M.F.Sc. (Dr. Pampa Bhattacharjee, Dr. K.V. Radhakrishnan and Dr. Anindya SundarBarman) for their motivation and encouragement whichhas made to undertake the present study.

The inland fisheries sector of the country shares more than 50% of the total production.  There is further scope to increase the production by sustainably exploiting the resources through introduction of various advanced aquaculture technologies.  The species is endemic to inland waters of Asia, mainly distributed along the Himalayan foothills (Zhu 1995).  A proper understanding and knowledge on the biology of the fishes not only assist in making species-specific conservation plan and culture practices but also helps in further systematic studies.

The significance of length-weight relationship (LWR) relies on the estimation of relationship between weights at different size of fish.  It is also useful in assessing the normal well being of fish under different physiological, climatic and environmental conditions to evaluate the ontogeny of fish stocks of different regions (Anwa-Udondiah & Pepple2011).  Further, it is also employed for the morphological comparison of different fish species and population from different habitat (Goncovales et al. 1997; Santos et al. 2002) and to assess the maturity of species (Lazima et al. 2002).  The LWR, Length-length relationship (LLR) and condition factor has been carried out in Indian waters by different authors from northeastern India (Biswas1982; Borah et al. 2017; Nath et al. 2017) and also from different localities of the country (Malhotra& Chauhan 1984; Sharma et al. 2016).  The condition factor describes the degree of robustness or plumpness of fish to determine whether fishes are in better or poorer condition (Koushlesh et al.2017).  It depends on physiological features such as maturity, spawning and food availability.

IUCN (2010) categorised this species under Least Concern (LC) criteria, but the abundance of fry and fingerlings of this species is assumed to have declined in the past.  The reason for reduction in the population of fishes in this region is due to indiscriminate and unscientific fishing by rural people, modification of riverine ecosystem by siltation, destruction of the breeding ground and loss of fish habitat and various anthropogenic stressors (Sharma & Das 2010).  Hence, the present study on LWR and Condition factor will be helpful to estimate biomass of fish to understand its population status (Das et al. 2015) and can be of great significance to biologists in formulating suitable policy for sustainable conservation and aquaculture diversification management practices in the region.

In the present study, the fishes were collected from the river Brahmaputra and its tributaries as well as Irrawaddy River basin (Manipur) from the northeastern states namely Arunachal Pradesh, Assam, Tripura, Manipur and Nagaland during May 2016 to November 2017.  A total of 83 specimens of B. dero were collected under COE-FAB Project from different tributaries of the Brahmaputra River Irrawaddy River, Manipur.  The names of sampling sites along with coordinates are enlisted below in Table 1. Body parameters such as total length (TL), standard length (SL) were measured using digital dial vernier caliper to nearest millimeter (0.1mm) and weight (W) was measured using digital weighing machine to nearest gram (0.1 g).  The fishes were mainly collected by employing different gears such as cast net, lift net of varied mesh sizes and other traditional gears (such as Bamboo traps, Hook and Lines).  After collection, specimens were weighed and preserved in 10% formalin for further study.  Fish specimens were identified to species level by following Jayaram (2010) and Vishwanath et al. (2007).  The LWR was calculated by following the LeCren’s (1951) Cube law equation W = q*Lb, where ‘q’ is intercept and ‘b’ is slope of regression lines. The value of regression coefficient ‘b’ was calculated by following Zar (1999).  The ‘t’ test was applied to find out the significance of ‘b’ value using the formula t=b-3/sb where, sb is standard error of ‘b’ against the Ho=3 and HA≠3.  The Length-length relationship (LLR) was calculated by following the allometric equation TL=aLb.  Before regression analysis length and weight data of individual specimen was log transformed using MS Excel 2010 and outliers have been removed by following Froese(2006).  The condition factor and relative condition factor were determined, using the formula:

The LWR for B. dero is assessed for total length and standard length separately in relation to total weight.  The minimum and maximum values for observed parameters are tabulated in the Table 2.  The estimated value for regression parameters, growth exponent, intercept, correlation coefficient (r), goodness of fit (r2), t-test value and p values for various body parameters are summarised in Table 3.

Therefore, by substituting the value of ‘a’ and ‘b’ in the regression equation (Y= a + bX) can be written as:

We can obtain ‘q’ of the original length-weight relationship by taking the antilog of ‘a’:

Hence, the allometric equation W = q*Lb to find the relationship between W (in g) and L (in cm) can be written as: 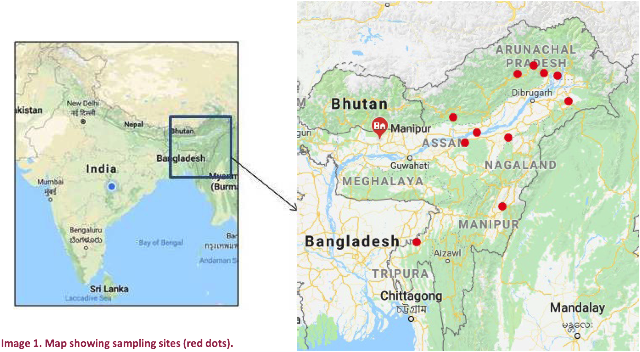 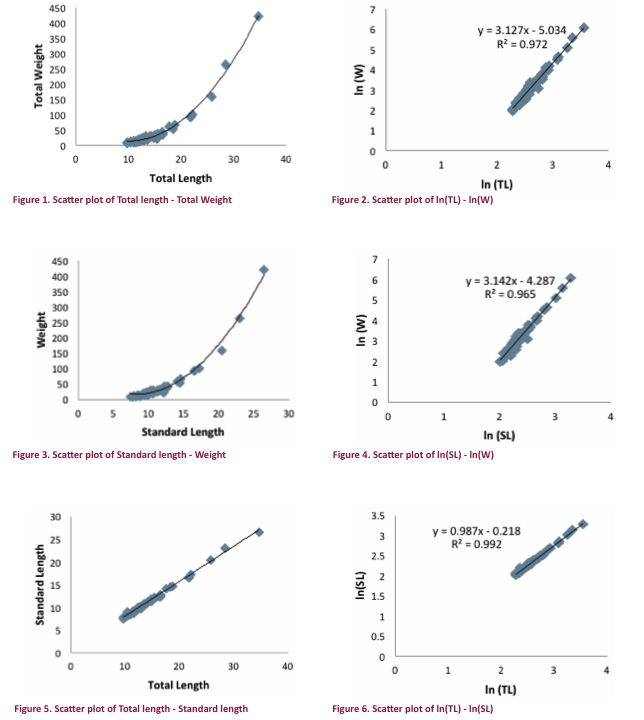 Table 3. Different parameters of LWR in B. dero.

The normal well-being and growth of fish is usually affected by the environmental factors. The body parameter differs for the fishes inhabiting under different agro-climatic conditions and shows significant variations in growth parameters.  Depending on the value of ‘b’ of LWR, the growth in fishes can be said as isometric (b = 3), positive allometric growth (b > 3) and negative allometric growth (b < 3) (Tesch1971; Ricker 1975); however, LeCren’s Cube Law states that the value of ‘b’ remains 3 for ideal fish and follows isometric growth.  In the present study the value of parameter ‘b’ was found between 2.5 and 3.5 as suggested by Froese (2006). Hence, it can be inferred that fishes follow positive allometric growth which indicates that fishes become more round and heavier as length increases.  The ‘b’ value in present study was found to be higher from those reported by Biswas et al. (1982) (b= 2.903) from northeastern India and Malhotra & Chauhan (1984) (b=2.2377), Sharma et al. (2016) (b = 3.024) from other parts of the country.  The slightly higher values of b>3 may be attributed because of the better food availability, and congenial environmental condition when specimen was sampled.  Similar findings have also been reported by Keskar et al. (2015) in Lepidocephalichthys thermalis and Paracanthocobitis mooreh because of the extended breeding periods and different stage of sexual maturity while in the latter species it was stated to be a less polluted water body.  Based on the same analogy the specimens collected for present study were from pristine waters as a result ‘b’ value was higher which is further confirmed by calculating correlation coefficient.  The value of correlation coefficient ‘r’ is more than 0.9 for both the cases viz. for TL and SL and hence shows high degree of correlation.  Relatively high value of ‘r2’ is delineated in graph whichshows that scattered points are very close to the trendline.  The value of ‘t’ is found to be significant at 95% confidence level.

Sharma et al. (2016) erroneously quoted that, no work on LWR of this species has been done, perhaps he was not aware of the taxonomic status of B. dero (=Labeo dero); however, perusal of literature reveals that a lot of work on LWR of B. dero has been done elsewhere in the country (Malhotra & Chauhan 1984; Sharma et al. 2016).  The present work from northeastern region seems to be a lead work on this aspect.  There is no database on the LLR of this species in fish base (Froese & Pauly 2017), the present study inferred that value of ‘b’ for LLR is less than one which indicates that growth in total length is less with per unit increase in standard length and follows non-isometric growth and confirms the view of Keskar et al. (2015) and Nath et al. (2017). The robustness and goodness in health of fishes under existing environmental condition is exhibited by the value of ‘K’.  In the present study the value of ‘K’ is found close to one which is similar to those reported by Biswas(1982) from northeastern India.  The slight difference between the values of ‘K’ in two different populations may be because of the different habitat, one from Lotic water body while other from Lentic water body.  As both the water bodies are clearly different and exhibit differences in physicochemical condition of water can be said to attribute this difference in condition factor.

Hence, based on the results of present study it can be concluded that the value of ‘b’ was found to be more than three which inferred that health and general well being of fishes are in good state in the region which may be due to the presence of suitable food and congenial environment at sampling areas.  On the other hand, the reduction of population of studied species as well as other fishes in the region noted by different authors as a general statement without pinpointing the locations is of great concern and needs to be investigated meticulously.  Proper conservation strategies, monitoring and better management plan can be helpful to cope up with such alarming situation.