Biology and distribution of the Clouded Apollo Parnassiusmnemosyne (Linnaeus, 1758) (Lepidoptera: Papilionidae), a rare butterfly in the Republic of Mordovia, Russia

Copyright: © Ruchin 2018. Creative Commons Attribution 4.0 International License. JoTT allows unrestricted use of this article in any medium, reproduction and distribution by providing adequate credit to the authors and the source of publication.

Swallowtail butterflies (Papilionidae) are attractive to collectors and reflecting habitat changes, populations of most species in many regions are threatened (van Swaay et al. 2012).  Five of 24 species of swallowtails in Russia occur in the forest-steppe zone of the Middle Volga region (Lvovsky & Morgun 2007).  The Clouded Apollo Parnassius mnemosyne (Linnaeus, 1758) was included in the Red Data Book of Russian Federation (2001).  This beautiful butterfly is found in many countries of Europe, some countries of western and central Asia (to the south of western Siberia, and the mountains of central Asia, Afghanistan) (van Swaay et al. 2012). In Europe, it is classified as Near Threatened (van Swaayet al. 2012).

The Republic of Mordovia is located in the centre of the east European plain between 53.63330N & 55.18330N, and between 42.18330E & 46.74990E in the southwestern periphery of the Volga basin in the interfluve of rivers Moksha and Sura.  The territory includes forest and forest-steppe zones of central Russia. The eastern part of Mordovia is located in the northwest of the Volga upland and the western part in the Oka-Don lowland.  In this regard, a variety of vegetation types is observed in the area of study.  The west, north-westand north of the country is occupied by boreal, coniferous, and mixed forests under the protection of Mordovia Nature Reserve (Ruchin & Egorov 2017).  Broad-leaved forests cover the central and eastern parts.  In the east and south-east predominate forest-steppe landscapes (Yamashkin 1998).

Our own material was collected in the course of systematic research in 2006–2016.  During this time, more than 200 geographical points, located in all the areas of the republic, were directly examined (usually, all possible biotopes).  Visual censuses were performed while watching the feeding of imago butterflies. The flight of butterflies begins in the middle of May and ends in the first half of June. At this time, we conducted transect walks in the major habitat areas of butterflies.  In this case, the route was a linear path, along which the recorder counted butterflies, occurring within the zone of reliable determination (this zone is 5m in both directions from the route).  Visual censuses allow population assessment of butterflies in the natural environment without catching them.  If necessary, the recorders stopped to make an entry in the observation’s log on feeding of imago butterflies. 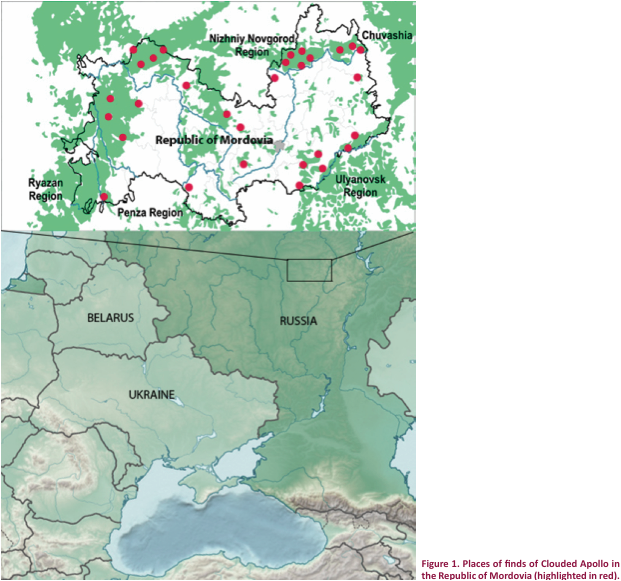 Fragmentation and shrinking of this species’ range has occurred due to anthropogenic transformations of landscapes and habitats in Europe and the densely populated areas of European Russia (Konvicka & Kuras 1999; van Swaay et al. 2012).  On the other hand, the species has become more abundant in a number of European countries (Gorbach & Kabanen 2010; Liivamägi et al. 2013).  In the Middle Volga region it is still noted as local, but inhabiting many sites, and is sometimes rather abundant (Sachkov 1988; Zolotukhin 1994; Goreslavets et al. 2001; Korb et al. 2017).  At least 30 key habitats are known in Mordovia (Fig. 1), but cenopopulations (a composition of all specimens belonging to the same species and inhabiting the same site) and breeding grounds stick to more compact areas.

According to the collections of Mordovia Nature Reserve Museum, Clouded Apollo was first found here in 1984.  In recent years, it was observed in three other habitats in this specially protected area.  According to observations, in 2006 in Smolny National Park only single specimens (not more than 2–3 specimens) per 1km of transect walk were recorded.  However, in 2007 in LvivForestry in the abandoned village (a large glade with wooden buildings) there were recorded 10 specimens per 1km of the route, and in a small section of the forest edge—18 specimens per single km (Ruchin& Kurmaeva 2010).  In June 2007, a mass flight was recorded in the Bolshebereznikovsky District: local clusters were observed on a forest road, leading through mixed forest with a predominance of pine.  In some of these clusters there were 25–37 specimens per kilometerof the route; in some places (near the puddles on the road), these aggregations were even larger (40–65 specimens / m2 were observed in different sections of the road).  In broad-leaved forests (often of secondary regeneration), the population usually varies from 2–7 specimens per kilometer(sometimes up to 65 specimens per km). Occasionally, in large glades, its number reached up to 22 specimens / km (Ruchin & Kurmaeva2010).  Thus, the number of Clouded Apollo records and the species abundance were at the highest range in 2006–2011.  Since 2012, the number has decreased again and does not exceed 1–3 specimens per km of the route.

In Mordovia this species prefers broad-leaved forests (more often secondary regrowth), sometimes, mixed pine- broad-leaved forests. Habitats are well-warmed forest glades with mixed herbs, forest fringes, cuttings, sides of forest roads (Image 1).  According to our observations, imagos feed on Fragaria viridis L., Lathyrus pisiformis L., Taraxacum officinale L., Leucanthemum vulgare Lam., Stellaria nemorum L., Ranunculus polyanthemusL., Geranium pratense L., Achillea millefolium L. and Viola mirabilis L. The forage plant of caterpillars in the region is Corydalis solida (L.) (Papaveraceae). Caterpillars pupate in a cocoon on the ground among vegetation.  Eggs overwinter with a formed caterpillar inside.  Butterflies fly from mid-May to early July; they have a distinguishing slow gliding flight; feed on flowers of various herbs; when the species is abundant butterflies become rather daring, and do not try to fly away from the threat.

This species is rather stenotopic and local, it is not prone to dispersal, and it disappears at significant disturbances of existing habitats.  In cases of significant increase in number, butterflies disperse over isolated habitats, but the permanent colonization of new habitats and migrations through agrocenoses are not common for the species; most of the cenopopulations from localized sites are mostly, or practically, isolated.  At all stages of development the species is vulnerable to disturbances in soil cover and burnt areas.  The decrease in the fodder base of caterpillars can be caused by the destruction of fodder plants, especially by grazing of cattle, while the fodder base of butterflies suffers from damage to vegetation and hay harvesting in flowering glades.

There were no special protection measures for Clouded Apollo taken in the republic.  In the future, it is advisable to limit the economic activities in the habitats of the species: to protect Corydalis solida, plants with crimson flowers, from damage; prohibit making fires outside the designated areas, cultivation of forest edges and glades, machinery movement outside of the roads, cutting trees and haymaking in June; to limit grazing by the end of June, excavation and trampling of grass; to prohibit chemical processing in a radius of at least 200m from the species habitats.  Prevent overgrowth of habitats by bush and weed.  At least 15 populations live in the territories of Mordovia Reserve, Smolny National Park and at nature monuments such as Oak Grove, Khanenevskaya Grove, TarhanovskayaDacha, and Birch Grove. 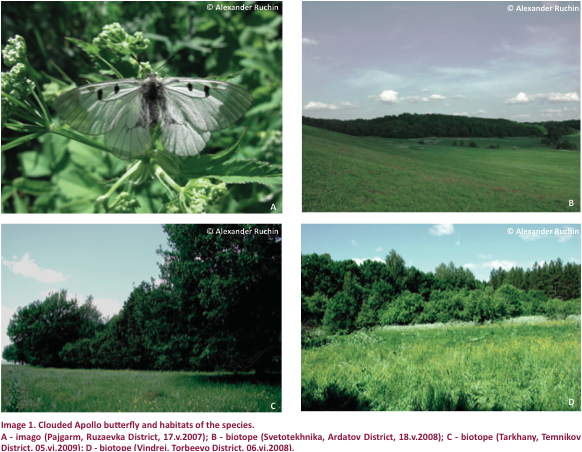 Sachkov, S.A. (1988). Lepidoptera of Kuibyshev Region entered into the Red Data Book of the USSR, and their protection. Protection of animals in the Middle Volga region (Collection of articles): 43–51.

Zolotukhin, V.V. (1994). Materials on the fauna of Lepidoptera in the Ulyanovsk region. Part 1. Rhopalocera. The Nature of Ulianovsk Region 5: 60–81.