Copyright: © Jayakumar & Nameer 2018. Creative Commons Attribution 4.0 International License. JoTT allows unrestricted use of this article in any medium, reproduction and distribution by providing adequate credit to the authors and the source of publication.

Author Contribution: Both the authors contributed equally to the design of the study, field work, morphometric data collection, analysis and manuscript preparation.

Abstract: Species composition and abundance of reptiles in selected agroecosystems in Thrissur plains, near Palghat Gap, southern Western Ghats in India, was studied from January 2017 to May 2017.  The agroecosystems surveyed were coconut, cashew & rubber plantations, home garden, paddy field, and botanical garden.  Time-constrained visual encounter surveys of a total effort of 360 man-hours were done in the field.  Coconut and cashew plantations reported the highest species richness with 11 species each, while the highest number of sightings (159) were recorded from botanical garden.  Bronze Grass Skink Eutropis macularia was the most abundant species in agroecosystems.  Correspondence analysis was done to compare the reptilian diversity in the agroecosystems.  The reptile fauna of home garden and paddy field were found to be more distinct than the rest of the agroecosystems.  A total of 17 species of reptiles were recorded during the study, thus highlighting the significance of agroecosystems in acting as important buffer landscapes for reptiles.

Nearly two-thirds of the terrestrial environment of the world is made up of managed ecosystems with natural, undisturbed habitats accounting for only a meagre five percentage.  These managed ecosystems include agricultural systems, forestry systems, and human settlements (Gamage et al. 2008).  Herpetofauna makes up 48% of the terrestrial vertebrates that are threatened by agroforestry and forestry activities (Palacios et al. 2013).

Despite the fact that herpetofauna makes up half of vertebrate species, they are very much understudied in their response to change in habitats from natural forests to plantations.  The review done by Palacios et al. (2013) on the herpetofauna of agroecosystems on a global scale found just 27 studies pertaining to amphibians and reptiles.  Very few studies on the reptilian diversity of agroecosystems have been done in southern India too.  Perhaps the only study on the reptiles of human-modified habitats is the one by Venugopal (2010), who studied the agamids of human-modified habitats in the Western Ghats.

In a time when more and more forest areas are being converted into plantations and agricultural lands for meeting the growing needs of human populations, it is important to evaluate the reptile diversity in these modified ecosystems.  It is important to assess whether these agroecosystems are capable of supporting and sustaining reptile biodiversity, particularly that of habitat specialists and endemic species.

The study was conducted in selected agroecosystems in Thrissur District, southern Western Ghats, Kerala (10.53–10.550N & 76.27–76.280E, 20–70 m).  The agroecosystems chosen included cashew, coconut & rubber plantations, home garden, paddy field, and botanical garden (Fig. 1).  The study area chosen mostly comes within the main campus of Kerala Agricultural University in Kerala.  The campus has a total area of 391.44ha and is located very close to Peechi-Vazhani Wildlife Sanctuary.  The major habitats include gardens, botanical gardens, plantations of rubber, coconut, plantain & cocoa, and orchards of mango, jackfruit, sapota & guava.  The whole area must have been under forests about one and a half centuries ago and was subsequently converted mostly into rubber plantations.  Later, in 1971, the land was handed over to the Kerala Agricultural University (KAU), and the KAU developed these areas into different land uses as explained above.  The 14-year mean minimum temperature is 23.30C and the 10-year mean maximum is 31.90C.  The area receives southwest and northeast monsoons, the greater portion of the rainfall, however, is received from the southwest monsoon between June and September.  The mean annual rainfall is 2803.4mm.  The mean number of rainy days per year is 112 (Manohar et al. 2017).  The paddy field selected was located at the Kole Wetlands in central Kerala, which incidentally is a Ramsar site and an Important Bird Area (IBA) (Islam & Rahmani 2004, 2008).

The method followed was time-constrained visual encounter survey of a two-hour duration in each of the agroecosystems in the morning (08:00–10:00 hr) and evening (19:00–21:00 hr).  Each location was covered on foot and whenever a species was sighted, observations such as the name of the species, the number of sightings, time, and GPS location were recorded following Ishwar et al. (2001).  At each agroecosystem, the survey was carried out for five days.  Thus, the total effort spent during the entire course of the study was 360 man -hours.  Additionally, micro-habitat parameters such as canopy height, canopy cover, leaf litter depth, leaf litter cover, shrub cover, herb cover, and number of fallen logs were recorded at each of the agroecosystems.  Litter depth was measured using a steel scale (Elora) and canopy height was measured using Haga altimeter (Durga Enterprises).  The rest of the measurements were visually estimated (see Vasudevan et al. 2001; Kanagavel et al. 2013).  Weather data like maximum temperature, minimum temperature, and relative humidity for the study period was obtained from the Kerala Agricultural University Weather Station located in Thrissur District, Kerala.  The study was carried out from January to May 2017 in the pre-monsoon season.

Chi-square analysis of association was performed to understand whether the reptile fauna had a preference for any plantation types (coconut, cashew, rubber, home gardens, botanical gardens, or paddy fields).  Patterns of relationship between species abundance across nine environmental parameters (canopy cover, canopy height, litter depth, litter cover, shrub cover, herb cover, maximum temperature, minimum temperature, and relative humidity) in different plantation types were investigated using canonical correspondence analysis (CCA), a multivariate constrained ordination technique (Legendre & Legendre 1998).  A triplot of observations grouped for plantation types, species, and eigenvectors of environmental variables was plotted to understand the species distribution along the plantation types and environmental variables.  A scree plot of eigenvalues and cumulative inertia explained by each canonical axes was plotted to understand the contribution of each axes.  The significance of the canonical axes was tested using permutations test (Legendre et al. 2011).  Statistical analysis was performed in PAST 3.19 (Hammer et al. 2001).

A total of 594 sightings of 17 species (Table 1) was encountered from the agroecosystems during the study period, with an average pooled encounter rate of 1.27 reptiles/man-hour.  The species richness was the highest in coconut and cashew plantations, with 11 species each (Table 2; Images 1–14).  The abundance of the reptiles, however, was greatest in botanical gardens (159 sightings).  Bronze Grass Skink Eutropis macularia  was the most encountered species in the agroecosystems of Thrissur District with 220 sightings, followed by (Murray’s) House Gecko Hemidactylus cf. murrayi totalling 87 sightings.

The variation in the number of sightings of the reptiles between day and night are given in Fig. 2.  As expected, it can be seen that most of the reptiles were more active during night hours.  Out of the six species of geckos seen during the study, all four species of Hemidactylus geckos, as well as   Cyrtodactylus cf. collegalensis, were nocturnal in habit.  The Day Geckos Cnemaspis spp., however, as its common name suggests, were observed mainly during morning hours.  Among skinks, Ristella cf. beddomii was primarily a nocturnal species, while Sphenomorphus dussumieri was spotted only during day hours.  Eutropis macularia, E. carinata, and the agamid lizard Calotes versicolor were observed during both morning and night hours.  Calotes versicolor was observed to be sleeping when spotted during night hours.  All the seven species of snakes observed were spotted during night hours (Fig. 2).

While this is a preliminary, pooled analysis consisting of resource use frequencies of both active and dormant sightings, it gives at least a preliminary picture of probable impacts on resultant species records.  We mention this with a caution that more studies with better sample size and discerning active and dormant sightings are needed to fully understand the impacts of these abiotic variables on species composition and assemblage structure.  We believe that our work will pave the way for future studies to take a deeper look into this subject (also see Vijayakumar et al. 2006).

Palacios et al. (2013), who reviewed studies on the herpetofauna in human-modified habitats across the world, found that in 81% of the cases plantations supported more herpetofauna than natural forests.  They also found that human-modified habitats support even some endemic species in agroecosystems.  Two species of reptiles endemic to the Western Ghats, Ristella cf. beddomii and Sphenomorphus dussumieri, were recorded from the agroecosystems of central Kerala.  The present sighting of the Ristella cf. beddomii from the agroecosystem at an elevation of 50m is lower than the known altitude range of 400–1300 m (Srinivasulu et al. 2014) of this species.

This documentation is important as it highlights the significance of agroecosystems in conserving and maintaining the reptilian fauna of the region, including some of the Western Ghats endemic species. 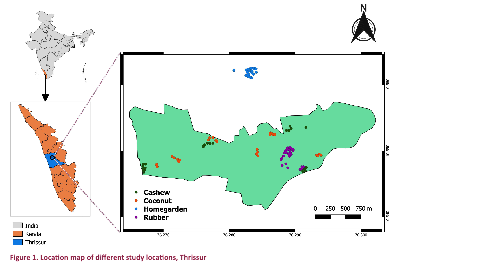 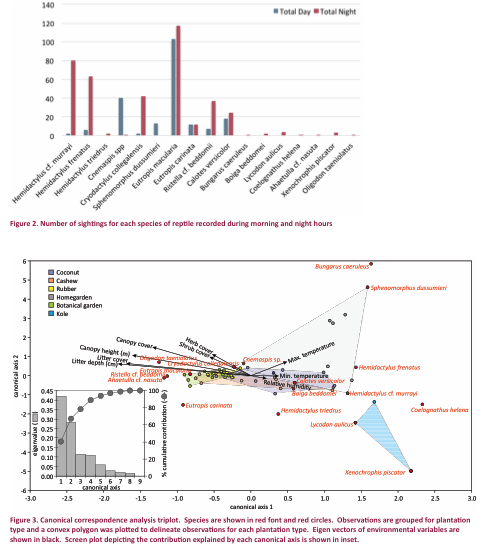 Table 2. Species diversity and abundance of reptiles in selected agroecosystems in Thrissur District 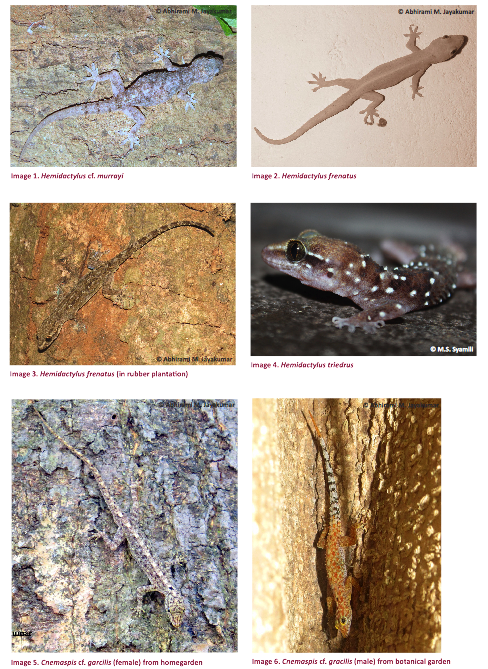 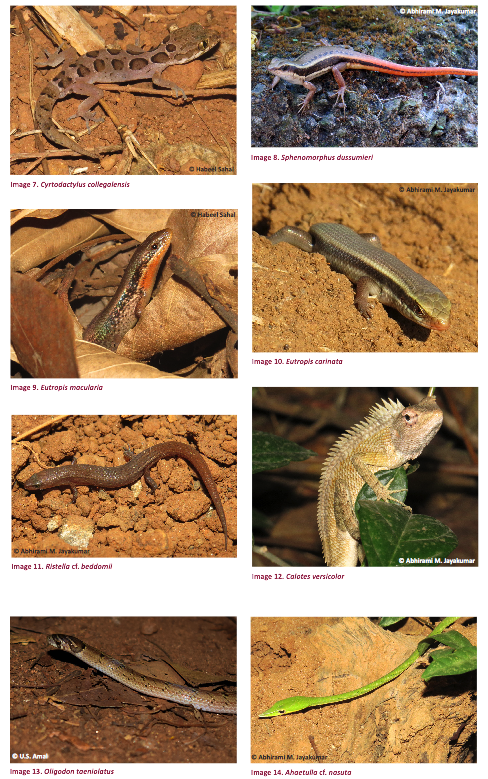 Ganesh, S.R. & M. Arumugam (2015). Microhabitat use and abundance estimates of under storey herpetofauna in the highlands of southern Eastern Ghats, India, with observations on roadkill mortalities. Asian Journal of Conservation Biology 4(2): 143–150.

Mahony, S. (2011). Taxonomic revision of Hemidactylus brookii Gray: a re-examination of the type series and some Asian synonyms, and a discussion of the obscure species Hemidactylus subtriedrus Jerdon (Reptilia: Gekkonidae). Zootaxa 3042(1): 37–67.