Copyright: © Thomas & Nameer 2018. Creative Commons Attribution 4.0 International License. JoTT allows unrestricted use of this article in any medium, reproduction and distribution by providing adequate credit to the authors and the source of publication.

Acknowledgements: The authors would like to thank the Chief Wildlife Warden, Kerala State Forest department sanctioning the study (No. WL10-947/2013). The Warden Munnar Wildlife Division and the Asst. Wildlife Warden, CWS provided the logistic support. We also thank the Kerala Agricultural University for the financial support for the study and the Dean, College of Forestry, KAU  for the encouragement. Ponnusamy at Chinnar WS and Akhil Das A, provided excellent support in the field. The 2011 batch of B.Sc. Forestry students of KAU helped us during the total population estimation of the GGS.

Abstract: This study was carried out to assess the population of Ratufa macroura in Chinnar Wildlife Sanctuary located in the Kerala part of the southern Western Ghats.  The population density of Ratufa macroura was estimated to be 15.26 squirrels/km2.  The total count method, however, gave the population range between 11 to 14 squirrels.  The current population estimation is about 78–85 % lesser than the previous population estimation of the Ratufa macroura carried out in 1993 and 2007 respectively, which is quite alarming.  The following conservation recommendations are suggested for the long-term conservation of R. macroura, which include habitat restoration to maintain the canopy contiguity and regulation of the pilgrimage and the tourism activities in and around the R. macroura habitat.  Urgent steps should also be taken to undertake studies on the genetics of R. macroura.  It is also suggested that systematic and scientific monitoring of the population of R. macroura be undertaken on a regular basis.

The family Sciuridae consists of 285 species of squirrels all over the world (Thorington et al. 2012), of which the Indian subcontinent harbours 28 species in 12 genera (Johnsingh & Nameer 2015; Nameer et al. 2015).  Among the four giant arboreal squirrels belonging to the genus Ratufa, three are found within Indian borders.  These are endemic to certain pockets of the Indian subcontinent, with the Indian Giant Squirrel (Ratufa indica) distributed in peninsular India, the Malayan Giant Squirrel Ratufa bicolor in northeastern India and the Grizzled Giant Squirrel Ratufa macroura in peninsular India and Sri Lanka (Menon 2014; Borges 2015; Joshua & Johnsingh 2015).  There are three subspecies of R. macroura.  These include R. m. dandolena, which occurs in southern India and Sri Lanka while R. m. macroura and R. m. melanochra are endemic to Sri Lanka (Phillips 1981).  Ratufa macroura is endemic to southern India (Kerala, Karnataka and Tamil Nadu) and Sri Lanka.  In India it is known to survive in nine severely fragmented locations, such as, the Grizzled Giant Squirrel Wildlife Sanctuary, Srivilliputhur, Theni Forest Division, Palani Hills, Anamalai Tiger Reserve, Sirumalai, Thiruvannamalai Forest Division, Hosur Forest Division and Cauvery Wildlife Sanctuary (all in Tamil Nadu), the Cauvery basin in Karnataka and Chinnar Wildlife Sanctuary in Kerala (Babu & Kalaimani 2014).  The only known population of R. macroura in Kerala is in Chinnar Wildlife Sanctuary (CWS).  The habitat of these giant squirrels in CWS is extremely unique and confined primarily to a narrow stretch of riparian vegetation along the Pambar and Chinnar rivers and their major tributaries (Ramachandran 1993).  Perhaps the only long-term ecological study on the Grizzled Giant Squirrels at the Srivilliputtur Grizzled Giant Squirrel Wildlife Sanctuary, Tamil Nadu were by Joshua & Johnsingh (1994), Joshua et al. (2006), and Raja & Joshua (2006).

The study was conducted in Chinnar Wildlife Sanctuary, which is spread over an area of 90.44km².  It is located between 10.25–10.350N and 77.08–77.260E  in the Kerala part of the southern Western Ghats, in Idukki District (Fig. 1).  The terrain of Chinnar is undulating with altitudes varying between 440m and 2,372m .  The major vegetation types found here are, the southern tropical thorn forest (scrub jungle), southern dry mixed deciduous forest (dry deciduous forest), southern moist mixed deciduous forest (moist deciduous forest), tropical riparian fringing forest (riparian forest), southern montane wet temperate forest (shola forests) and southern montane wet grassland (grasslands) (Champion & Seth 1968).  The dominant vegetation among these is the dry deciduous forest followed by scrub jungle which is mainly found in the plains and at lower altitude.  The dry deciduous and scrub jungle, together constitute about 70% of the total forest area in Chinnar.  The riparian fringing forests are linearly distributed and are confined to the rivers Chinnar and Pambar, and their tributaries.  Shola forests occupy a small fraction of the total area and are seen only in the higher reaches of Chinnar, above an altitude of 1800m.

Ratufa macroura in CWS  is primarily seen only in the riverine forests along the Chinnar and Pambar rivers and their tributaries.  The riverine or gallery forests are quite distinct and conspicuous among the surrounding scrub jungle and dry deciduous forests of CWS.  The effective habitat for the R. macroura at CWS  is estimated to be  less than 2km2.

a. Line transect method:  The line transect method by Buckland et al. (2001,  2010) was used in this study to estimate the population density of R. macroura.  The five transects were repeatedly walked once every month for 10 months (5x10=50) thus fifty, 2-km transects were walked from April 2013 to May 2014.  Each transect was walked by a team of three persons.  Each transect was walked in the morning, between 06:00–10:00 hr and afternoon between 15:00–18.00 hr.  Thus, a total of 200km were walked during the study period.  When a squirrel was sighted we recorded the cluster size, which means number of individuals at a time sighted, perpendicular distance, and azimuths along the transect.  The data collected was analysed using DISTANCE programme (version 6.2) (Buckland et al. 2004).  We evaluated different models of detection probability, viz. uniform, half-normal and hazard rate with three series adjustment terms and used the minimum Akaike information criteria (AIC) as the standard model selection procedure to select the best model for estimating density.  Apart from the squirrel density, the encounter rate (squirrel clusters/km) was also calculated.

b. Total count: The total count of the R. macroura was carried out from seven different blocks within CWS.  Whenever a R. macroura was sighted parameters like the number of individuals, time of sighting, habitat and tree species on which the squirrel was sighted were recorded.  At each of these locations we walked for 3 to 4h and the number of R. macroura was counted.  This was done simultaneously deploying a group of four people in each of the seven blocks for two days in the study area on 22–23 March 2014.

c. Regeneration survey: A regeneration survey was carried out at the study locations in the CWS, to find out the regeneration of the vegetation in the riverine habitats.  One hundred quadrats of 100m2 size were taken, with 20 each at each of the five study locations.  In each of these quadrats all plants ≥10cm girth at breast height (1.37m) were enumerated, and the information such as species of tree, height of the tree in meters and girth at breast height in centimetres were recorded (Pascal 1988).

The R. macroura is a solitary animal and is seen in pairs or as a family party of three individuals only during the breeding season.

The most preferred five plant species by the R. macroura at Chinnar were Terminalia arjuna, Mangifera indica, Tamarindus indica, Ficus microcarpa and Syzygium cumini (Thomas 2014).  The girth class distribution of these five-plant species is given in Fig. 2.  It is evident from Fig. 2 that the regeneration of these tree species is extremely low in CWS.

In one of the previous population estimates, Senthilkumar et al. (2007) gave a density figure of 64 squirrels/km2, which seems to be an over estimation.  Senthilkumar et al. (2007) states that “the squirrel density was calculated as the total number of squirrel sightings divided by the survey area” which is a crude method of density estimation and is not as per the standard density estimation protocol proposed by Buckland et al. (2004).

This small population of the R. macroura at  CWS, is faced with the several conservation challenges, such as increased predation risk (Thomas et al. 2017).  This could be due to the opening up of the of the canopy in the riverine habitat of Chinnar.  Moreover, the regeneration of the preferred food plant species of the R. macroura is extremely low.  The poor regeneration is because of the heavy grazing by the domestic cattle. Thus urgent steps should be initiated to curtail the cattle grazing within the riverine habitat in Chinnar WS. Additionally, habitat restoration programmes need be initiated to ensure the regeneration of the most preferred five plant species of the R. macroura such as Terminalia arjuna, Mangifera indica, Tamarindus indica, Ficus microcarpa and Syzygium cumini urgently.

We saw several possible hybrid individuals (Images 2 & 3) between R. macroura and R. indica.  The hybrid individuals were primarily seen in Kootar, Churulipetti and Chinnar-Marayur border.  There could be at least three to four hybrids at Chinnar, which is about 17% of the total population of Grizzled Giant Squirrel.  Detailed investigation on the status of hybrid individuals, reasons for hybridization, and the genetics of the R. macroura need to be urgently undertaken at Chinnar to find out the genetic purity of this species.  Detailed taxonomic studies using molecular tools should be carried out to ascertain the taxonomic status of the Indian population of the R. macroura.  The mix-up and hybridization between the R. macroura and R. indica also should be monitored to find out its effect on the long-term survival of the R. macroura.  Importantly, a Population Habitat Viability Analysis (PHVA) is also recommended for the long-term conservation of R. macroura. Joshua & Johnsingh (1994), also recommend the need for systematic study on habitat quality, feeding and breeding ecology of R. macroura if the squirrel has to be conserved and saved from further population loss in its range.

In addition to the above-mentioned threats, anthropogenic disturbances in the form of pilgrimage at Churulipetti, tourism and road kills also pose conservation challenges to the R. macroura.  The disturbances from the pilgrims and vandals in the riverine vegetation at Churulipetti region should be regulated.  This causes considerable disturbance to the R. macroura, as the riverine vegetation is the key habitat of these squirrels, and thus the pilgrim’s entry to the riverine vegetation should be stopped.  To prevent the road kills, regular crossing points have to be identified and the animal should be provided with canopy connectivity using the artificial structures like bamboo bridges across the road.  There are also some ill effects due to the ecotourism ventures, for example, the log houses constructed on the banks of the riverine habitat and the tree top huts, constructed on the top of the trees in the riverine habitat, could be detrimental to the long-term survival of the R. macroura.

It is also important to undertake regular, systematic and scientific population monitoring of R. macroura on a regular basis, at least once a year to understand the population fluctuation of this extremely small and dwindling population of R. macroura at Chinnar Wildlife Sanctuary.  A population estimation of the R. macroura in its entire range in southern India, also should be carried out to ascertain their actual population in India. 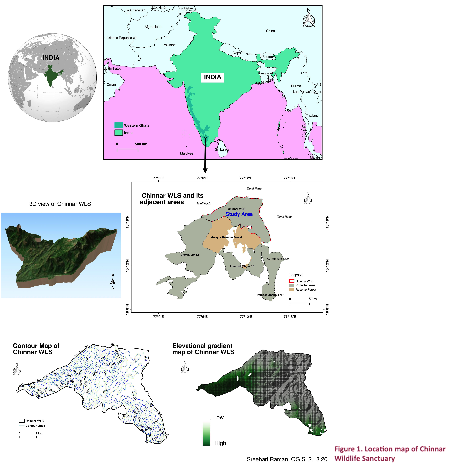 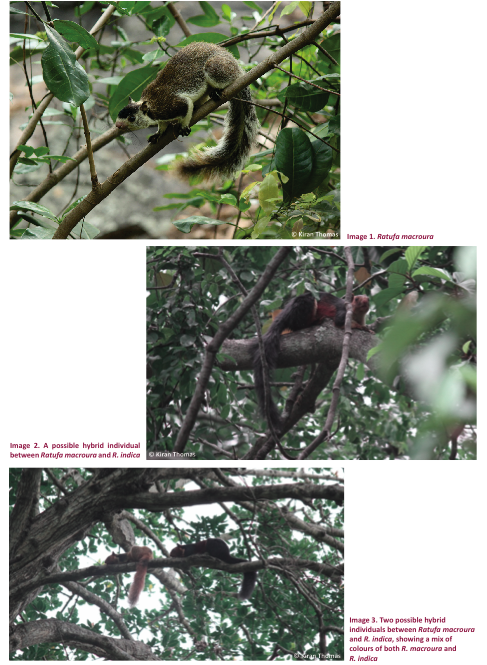