Copyright: © Lalrinawmi et al. 2018. Creative Commons Attribution 4.0 International License. JoTT allows unrestricted use of this article in any medium, reproduction and distribution by providing adequate credit to the authors and the source of publication.

Abstract: Mizoram is regarded as one of the biodiversity hotspots of the World owing to the diverse group of flora and fauna documented here.  Information regarding the macrofungi, however, is very limited.  For this reason, a systematic study of mushrooms from Mizoram was undertaken and during the field survey, Amanita spissacea was collected and identified.  This is the first report of this mushroom from India.  This species was identified on the basis of its morphological and microscopic characteristics as well as molecular characterization of the ITS region of rDNA.  Phylogenetic analysis also confirmed that A. spissacea was a distinct species from A. fritillaria, A. sepiacea, A. citrina and other closely related species Amanita section Valideae.

Mizoram lies in northeastern India sharing its borders with Assam, Manipur and Tripura and has international borders with Bangladesh and Myanmar.  It covers a geographical area of 21,081km2 and lies between 21.966–24.5830N  and 91.250–92.4830E.  The Tropic of Cancer passes through the state at 23.5000N (Mizoram Remote Sensing Application Centre 2009).

Amanita Pers., is a well known mushroom genus with global distribution comprising both edible and poisonous species which are usually mycorrhizal symbionts with plants.  The genus Amanita Pers., contains about 500 species worldwide (Kirk et al. 2008), and for some time, only 66 species were reported from India (Bhatt et al. 2003; Semwal et al. 2005, 2007; Vrinda et al. 2005).  Recently, a number of reports have been added to the list from several researchers (Singh & Kaur 2016; Bhatt et al. 2017) with the latest report of 80 species of Amanitaceae being listed including 73 species of Amanita reported from different parts of India (Verma & Pandro 2018).

During the course of macro-fungal foray to different parts of Mizoram, Amanita spissacea S. Imai was collected and identified.  This species is described and illustrated for the first time from India.

Macro-morphological descriptions were based on field notes and color photographs of the macrofungi.  Micro-morphological data was obtained from the dried specimens with the aid of a light microscope after sectioning and staining with cotton-blue.  Spore prints were taken by placing the fresh specimen on a microslide.  Descriptions of spore shapes are based on the study reported by Bas (1969).

DNA isolation, amplification and sequencing: Molecular methods were performed following Zothanzama et al. (2016), where DNA was extracted using a CTAB method, followed by amplification of the internal transcribed spacer region (ITS) of the rDNA and sequenced with both primers (ITS1F and ITS4B).

Phylogenetic analysis: The ITS dataset was aligned with the MAFFT v7.222 (Katoh et al. 2002) and jModelTest 2.1.10 (Darriba et al. 2012) was used to determine the appropriate model for Bayesian analysis (HKY85).  Phylogenetic analysis inferred from ITS sequences was performed using MrBayes 3.2.6 (Huelsenbeck & Ronquist 2001). 1.1 x 106 MCMC generations were used with a sampling frequency every 200 generations and the first 10% of sampled trees were discarded as burn-in.

Habitat: Solitary to scattered or gregarious on ground in a broad-leaved sub-tropical forest.

In this study, we identified this species based on morphological, microscopic and molecular characteristics. This is the first report of Amanita spissacea from India.  Results from sectioning of the fruiting body and observations of basidiospores indicated this Amanita species was most closely related to A. spissacea.  Species identification based on morphological characteristics is difficult to differentiate from other closely related species such as A. fritillaria, A. sepiacea, A. citrina and others.

The present species has been reported and described for the first time by Imai (1933) and Gilbert (1940) as Amplariella spissacea.  The macro and microscopic features of the present species well matched with the description given by Imai (1933) who described Amanita spissacea as pileus with 6–10 cm, convex, then extended, dark chestnut, warted, white flesh, stalk 10–15 cm long, firm, bulbous base, covered with dark margin, scaly, membranous ring. Spores globose, 7–8 µm, hyaline, apiculate.

Sequencing of the ITS region of rRNA and phylogenetic analysis further showed that the Mizoram sample matched GenBank accession Amanita spissacea from Belgium (KY747469), Republic of Korea (KM052550, KM052546) and Japan (AB015683) in a well-supported clade with A. fritillaria forming a sister clade.  These results hence confirmed that the specimen of Amanita from Mizoram (MZ10-KY940266, MZJZR1-MG706138) is Amanita spissacea, a distinct species and separate from A. frittilaria, A. sepiacea, A.citrina and other previous reported Amanita species.

Mizoram is one of the northeastern states of India which is rich in mushroom flora.  Like many other Amanita species, A. spissacea has been reported to be poisonous in China (Zhishu et al. 1993) and recent mushroom poisonings in Mizoram State (Zothanzama & Lalrinawmi 2015) are prompting efforts to identify mushrooms in this region that are poisonous.  This report identifies this poisonous mushroom in India and confirms that it is a distinct species from other Amanita species.  Limited information is available concerning the wild mushrooms found in Mizoram and further studies are needed to assess and document the wide variety of wild mushrooms that can be found in this region. 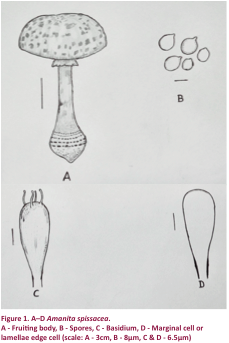 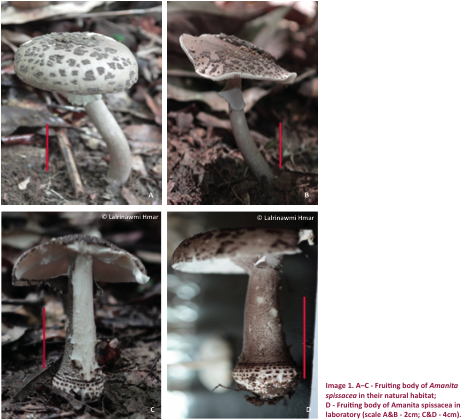 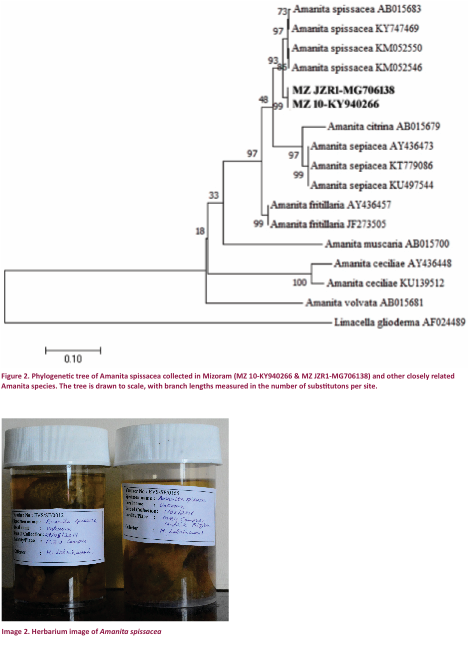