Copyright: © Neogi et al. 2018. Creative Commons Attribution 4.0 International License. JoTT allows unrestricted use of this article in any medium, reproduction and distribution by providing adequate credit to the authors and the source of publication.

Acknowledgements: Authors are grateful to the Butterfly Bangladesh team and Department of Zoology, Jagannath University for their logistic supports in this survey. We are also deeply indebted to Bangladesh Forest Department for their helpful cooperation during this survey.

During the last five years, many rare species of butterflies have been reported from the northeastern and southeastern parts of Bangladesh which are new to the country.  Considering the floral diversity and habitat variations, the northeastern region of Bangladesh hosts diversified faunal components like the northeastern state of Assam in India.  Most of the protected areas of this part of Bangladesh contain mixed tropical evergreen forests, especially in Moulvibazar District under Sylhet Division (Sadat et al. 2016).  This district contains a good number of forest areas with prevalent and diverse animal forms like butterflies, birds and mammals.  The forest areas of Moulvibazar provide good shelter or habitat for diversified butterfly fauna.  Recently, some remarkable new records have been enlisted in the butterfly fauna from Moulvibazar and its adjacent districts of Bangladesh (Shahadat et al. 2015; Neogi et al. 2016; Rahman et al. 2016; Sadat et al. 2016).

The butterfly Kaniska canace Linn. was recorded from Kauyargola forest beat in Rajkandi Reserve Forest (24.3020N & 91.9170E), Kamalganj Upazila, Moulvibazar District (Fig. 1) on 17 March 2017, as part of a study on butterflies initiated in March, 2011, intensively covering the northeastern forest ranges within the core area of Rajkandi Reserve Forest.  The species was photographed during the survey, with both the under (Image 1) and upper wing (Image 2) views for species confirmation.  The species was found to frequently settle on wet sands and damp patches, with a few instances of fast flying and resting on fern leaves.  Like other nymphalids, occasional basking with open wings and vibration of its wings when susceptible to threat or disturbance were also observed.  It was also pugnacious and highly territorial with other species of butterflies.  Only a single species, however, was sighted during the entire survey period in the study area.

Short description: Upper wing color of the sighted individual was indigo blue with broad silvery blue discal band on both wings.  On this band there were small black spots between the veins.  FW apex was square cut and strongly concave along termen.  Hind wing had small tail at vein 4.  Underwing color was cryptically mottled dark brown and black.

Remarks: Palaearctic butterflies are normally restricted to the Himalayan mountain ranges, with the exception of  very few species viz., Pieris canidia Linnaeus, 1768; Colias erate Esper, 1805; Argyreus hyperbius Linnaeus, 1763; Vanessa indica Herbst, 1794, and Kaniska canace Linnaeus, 1763 that occur in the southern Indian mountains as well (Larsen 1986).  K. canace seems to have been rarely recorded from the plains and prefer hill forests.  In the last two decades, K. canace has been sighted from a few locations of Assam, India (Bhuyan et al. 2005; Naik & Mustak 2016) which is more than 600km from the present study area.  K. canace, however, has been reported to be present in the Himalayan region between 1,000m and 3,000m, and in the southern Indian hills between 1,000m and 1,200m (Kehimkar 2013).

The present study thus confirms the presence of K. canace in Rajkandi Forest at Adompur by successfully presenting the first photographic evidence in Bangladesh.  This particular species of butterfly seems to  always be in this area, but the season and time of its occurrence barred earlier surveys.  This study also emphasizes on the need for a comprehensive butterfly study in the particular area, that will further enrich the existing list of butterflies in Bangladesh. 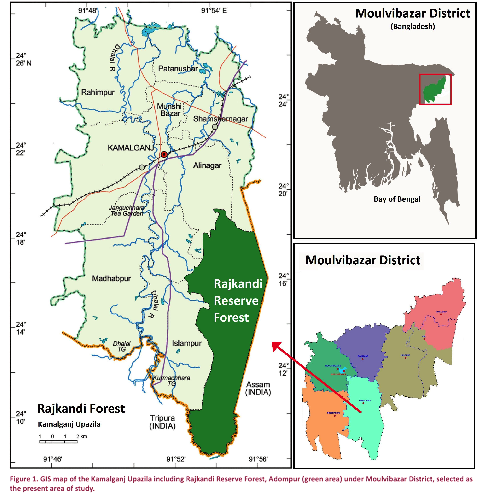 Larsen, T.B. (1986). Seasonal Movement of Palaearctic Migrant Butterflies into the Indian Plains-A Substitute for or Supplement to Hibernation? Atalanta 16: 245–252.