Copyright: © Jose et al. 2018. Creative Commons Attribution 4.0 International License. JoTTallows unrestricted use of this article in any medium, reproduction and distribution by providing adequate credit to the authors and the source of publication.

Abstract: An extensive survey and population analysis of the endemic and endangered tree Kingiodendron pinnatum, was carried out in the Kerala area of the Western Ghats. The aim was to assess the pattern of distribution, population size and natural regeneration of the species. The fragmented and patchy populations of the species are distributed in evergreen/semi evergreen habitats within an altitudinal range of 176-680m elevation. The tree attained a first layer/canopy species with a height range from 24–30m. Altogether 17 populations were identified and mapped in 13 forest locations in the region.  A total of 140 adult individuals of the species were enumerated within the 13 forest locations. Natural regeneration of the species recorded from three zones among the 13 forest locations covering 21,000m2 area representing the Kerala state.  The flowering trees displayed a height and dbh range of 10-30m and 85-320cm, respectively. The individuals are spatially arranged in aggregation among patchy populations. The populations are well represented by reproductive individuals with 77% and pre reproductive with 23%. Seedlings of 35.9% attained a height below 1m and 64.01% of a height above 1m. Considering the extent of distribution in the state, increase in the number of mature individuals (in addition to the enumerated area), and fair count of seedlings suggests a healthier conservation status of the species in the region. The economic and medicinal values, occurrence of isolated and fragmented populations, irregularities in the flowering and fruiting period among populations, however, extends urgent concerns over the pollination biology, detection of diverse genotypes subsequent multiplication and restoration of dwindling populations for the effective conservation and management of the species in situ.

The Western Ghats is home to both endemic and threatened plant species; the endemic legumes are of special interest as they include a number of economically important species that provide food, medicine and industrially important materials. Most of the legume trees such as Ormosia travancorica, Inga cynometroides,Humboldtia bourdillonii, and Cynometra beddomei are rediscovered after type collection and least studied on distribution and ecology (Sanjappa 1992). Considering the importance and paucity of studies, an extensive survey of the Kingiodendron pinnatum (Roxb. ex DC.) Harms in the Kerala area of the Western Ghats was conducted to analyse the distribution pattern, population structure, regeneration potential and subsequent assessment on the population growth for developing appropriate strategies for the management of the species.

Kingiodendron pinnatum is an endemic and endangered tree of the southern Western Ghats (CAMP Workshops 1998), belonging to the family Leguminosae and subfamily Detarioideae(LPWG 2017). The oleo-gum-resin present in the wood oil is used in treatments for gonorrhoea and catarrhal conditions of genito-urinary and respiratory tracts (CAMP Workshop 1998; Kumar et al. 2011).  The species has been severely exploited for its wood oil in the past (Anonymous 1959).  The stem bark is collected as a substitute of Saraca asoka, and reduction in population size was estimated by 20% during the past 40 years (Sasidharan 2017). The degeneration of reproductive stands is also being exacerbated by the poor seed and seedling bank in situ. The irregularity in flowering episodes, fewer flowering trees among populations, and low fruit set extended the poor regeneration in their natural habitats (Jose et al. 2017)

Exploratory surveys in the Kerala area of the Western Ghats were carried out from June 2014 to June 2015 as part of the study on ecology and restoration of legume trees in the Western Ghats of Kerala. The survey was conducted as per the available floristic literature and information gathered from different herbaria.  (Sanjappa 1992; Sasidharan 2011).The field expertise in consultation with plant taxonomists were also utilized for locating the populations. Herbaria of research & development centers such as TBGT (Jawaharlal Nehru Tropical Botanic Garden and Research Institute, Palode), KFRI (Kerala Forest Research Institute, Peechi), CALI (Calicut University) were consulted for specimen examination and relevant information. The identified populations were categorized as under northern, central and southern zones representing entire state (Fig. 1).

Population structural data was collected to quantify the number of adult individuals, stand height, dbh, first branching seen from ground, age class, basal area and basal cover of the species. Canopy layering/strata of species, number of individual’s falls in each dbh classes (10–49 cm; 50–100 cm etc.), major associated species were also recorded as part of structural analysis (Parthasarathi & Sethi 1997; Pascal 1988; Sukumaret al. 1992; Ramachandran et al. 2014). The height of stand was calculated on physical basis. The individuals with dbh ≤ 10cm were counted in all quadrats and treated as seedlings. Natural regeneration of the species was recorded from three zones (as Northern, Central and Southern) among the 13 forest locations identified covering 21,000m2 area representing the state.  The zones which have shown good regeneration were treated as ‘potential’ and lesser as ‘dwindling’ populations. The seedlings were categorized into unestablished seedlings (height ≤ 1m) and established seedlings (height ≥ 1m) (Ramachandran et al. 2014). 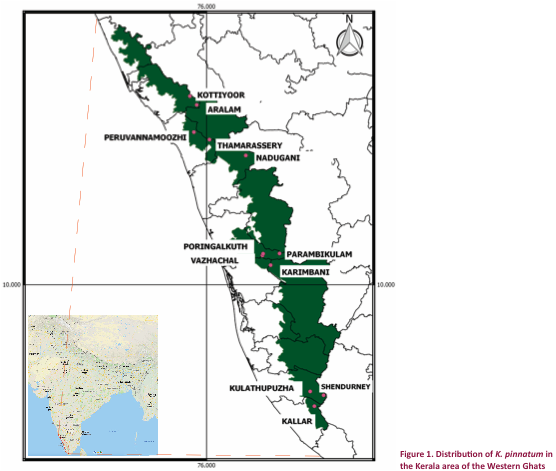 Seventeen populations of K. pinnatum were identified in 13 forest locations of the Kerala area of Western Ghats.  The populations located in a common forest area are merged as one location. The spatial distribution of each population covering number of trees corresponding to dbh classes is presented (Fig. 2). The population details such as forest location and GPS reading are provided (Table 1). The individuals of Kingiodendron pinnatum are distributed gregariously in the evergreen forests within an altitude ranging from 170m to 700m. The tree attained as first layer/canopy species with a height range of 24–30 m along with a maximum dbh of 320cm   (Image 1).

Individuals of K. pinnatum are distributed in aggregation on flat terrain. The mature stands exhibit an irregular shaped canopy with a straight bole. The populations were dominated by 77% of flowering individuals and 23% with pre reproductive individuals. Among the populations monitored, the flowering individuals showed a height and dbh range from 10–30m and 85–320cm respectively. Below this height and dbh range (9m anddbh of 70cm) individuals did not show flowering and are therefore categorized as pre reproductive. The post reproductive individuals were negligibly smaller in the identified populations. Among 140 individuals of the K.pinnatum, 57% of the individuals attained a dbh above 100cm followed by dbh 10–40cm(20%), 40–60cm(9%), 60–80cm(8%), 80–100cm (6%). The abundance of mature trees of K. pinnatum representing all the dbhclasses indicates the stable growth of the populations in its distribution range. The height and dbh classes of all the individuals enumerated in the study plots are presented (Fig.2 and Table 2). Out of 3064 seedlings counted in an area of 21,000m2 across the three sampled geographic zones; 1,103 (35.9%) seedlings had a height greater than 1m (established seedlings) whereas, 1961 (64.01%) seedlings with height less than 1m (un-established). It is also noted that amongst the three zones, the populations consisting northern zone had higher number of seedlings followed by the southern (potential populations) and central zones (dwindling populations) (Table 3). Seedlings were gregarious in the flat terrain and scattered in sloping terrain. 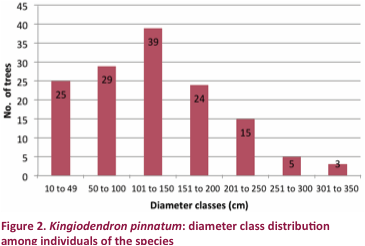 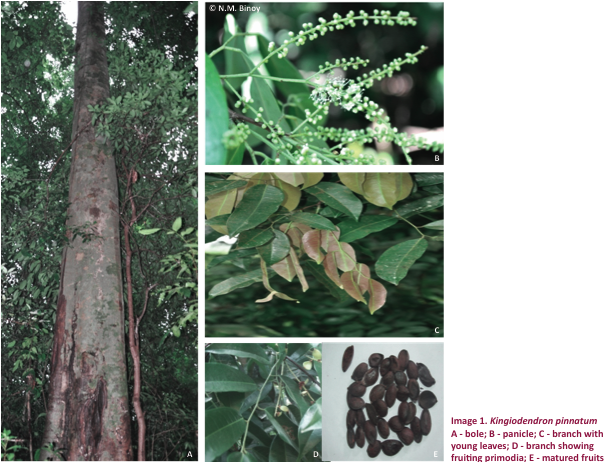 The populations of K. pinnatum are found fragmented in distribution in the Kerala area of the Western Ghats. The distribution of K. pinnatum from lower to medium high elevations in the evergreen ecosystems suggests better survival and adaptability towards different environmental gradients and habitat conditions.  Further, it is also observed that seedlings were gregarious in the flat terrain and scattered in sloping terrain. According to Zhu et al. (2004) and Bhatt et al. (2015), fragmentation of populations and habitats often results in endangerment of local species followed by loss of diversity in forest ecosystems. The gregarious nature of seedling emergence in flat terrain assumes uniformity in moisture status (Smith et al. 1997). The association of K. pinnatum with Hopea parviflora and Vateria indica in most of the sample plots is an indicative of the Hopea- Kingiodendron- Vateria vegetation common in the evergreen forest ecosystems of the Western Ghats (Pascal 1988). Height and diameter measurements are roughly synonymous with tree age. In K.pinnatum, the height and dbhis found correlative among populations. It is often reported that regeneration status of a tree species, in a given forest type was considered “good” when seedling density > sapling density > adult tree density; “fair” when seedling density > sapling density ≤ adult density; “poor” when the species survived in only the sapling stage but not in the seedling stage (Sukumar et al. 1992; Jayakumar & Nayar 2013; Dutta & Devi 2015). In the present survey, regeneration status is “good”, with greater number of seedling density than sapling density and sapling density greater than adult tree density in its population. The ratio of various age groups in a population also determines the reproductive status of an individual and indicates the future course of population growth (Odum 1971; Mast et al.1999). As the natural regeneration performance was found better among north and south zone (potential populations) compared to the central zone (dwindling populations), the genetic mixing up and variability of the central zone populations could be achieved through enrichment planting of seedlings from north and south zones as an improved conservation practice adopted for the species in the long run (Dias 1996).

Considering the extended distribution pattern, number of individuals of different age classes among the populations, fare performance in natural seedling regeneration extends healthier population stability and growth of the species as suggestive for reversion of conservation status from Endangered to Vulnerable in the Kerala area of the Western Ghats. However, the irregularities shown in flowering and fruiting;  occurrence of fewer number of flowering individuals among populations warrants conservation and management ofK. pinnatum, of the  southern Western Ghats.