Copyright: © Anoop et al. 2018. Creative Commons Attribution 4.0 International License. JoTT allows unrestricted use of this article in any medium, reproduction and distribution by providing adequate credit to the authors and the source of publication.

Acknowledgements:Authors are grateful to the funding agencies and The Director, SACON.

Abstract: Wind energy is an upcoming major source of clean energy.  The unprecedented proliferation of wind farms across landscapes has raised concerns on the environmental impacts.  Generally reported direct impacts of wind farms include collision of birds and bats with turbines, habitat alterations, noise pollution from the turbines, aesthetic impact on landscapes and displacement of faunal species.  Here we report our preliminary results indicating an apparent positive association of Indian Hares Lepus nigricollis with a wind farm in a scrub forest area.  This study was conducted at Harada Reserve Forest near Harapanahalli of Davangere District, Karnataka, India.  The pellet count method was used for comparing the abundance of the species between areas.  The abundance of Indian Hares in wind farm area was significantly higher than in the surrounding forest area without turbines.  The factors that might be affecting this pattern of preferential use of wind farm area by the Indian Hare are discussed and the scope for further studies also highlighted.

The traditional non-renewable energy from finite resources such as petroleum, coal and nuclear energy entailing high environmental impacts is unsustainable in the long run and hence there is increasing global attention towards renewable energy like solar and wind.  While a renewable resource is a cleaner source of energy, it also has its own share of environmental impacts albeit at a lesser magnitude than the non-renewable.

The growth of wind energy sector in India has been surpassing the planned additions in the respective five-year plans. Among the Indian states, Gujarat, Maharashtra, Karnataka, Tamil Nadu and Andhra Pradesh have the maximum potential and installed capacities in wind sector.  The unprecedented rate of expansion of wind farms is also raising several concerns regarding their impacts on local biodiversity. Alteration of an ecosystem and subsequent disturbances will change the faunal composition resulting in changes in local fauna.  The shift in avifaunal territories due to roads, supporting structures and the activities during their operation is of major concern for birds (Kuvlesky et al. 2007).  The major reported impacts of wind farms are: (1) habitat destruction (Larsen & Madsen 2000; Larsen & Guillematte 2007), (2) impact on aerial/flying fauna, especially birds and bats (Nelson & Curry 1995; Howe et al. 2002; Barclay et al. 2007; Kunz et al. 2007; Bernardino et al. 2013; Narwadeet al. 2013), (3) noise pollution (Rabin & Owings 2006), and (4) visual/aesthetic impacts on landscapes. Several studies have shown that certain faunal groups, especially raptors, tend to avoid the wind farm sites (Arun et al. 2015).  Though the installation of wind farms started in India in the early 80s, studies on impact of wind farms on wild species is scarce from Indian subcontinent (Pandeet al. 2013; Arun et al. 2014, 2015).  In the case of many species of raptors, displacement from foraging sites has been reported because of the establishment of windmills (Whitefield & Coupar 2005); however, studies on the response of mammals, other than bats, to wind farms are scarce.

The Indian Hare Lepus nigricollis,also called Black-naped hare, is a common species of hare in the Indian subcontinent, categorized as Least Concern by IUCN Red List of Threatened Species (Maheswaran et al. 2008).  The species is also introduced in many of the islands of Andamansby humans (IUCN 2016). Recent studies have shown that birds and mammals adapt to adjust with development through synurbization (process by which animals adjust to human made habitat changes (Luniak 2004).  We examined whether the habitat use of the Indian Hare in and around a wind farm shows any evidence of synanthropism (the propensity of an organism to associate with humans or altered habitats ecologically).

The study was conducted at Harada Reserve Forest near Harapanahalliof Davangere District, Karnataka from September 2014 to February 2015.  The wind farm study area is located within this reserve forest occupying a 56.5km2 area (between 14.75–14.880N & 75.79–75.850E).  The area is predominantly scrub forest, with major tree species being Anogeissus latifolia, Chioroxylons weitenia and Albizia amara.

We used the pellet count method to ascertain the presence of hare in this study.  Four 500m transects were laid in the Harada forest reserve where two transects were within the wind farm and the other two were in the non-turbine areas of forest (Fig. 1).  We put 16 quadrats of 5.08cm width and 3.04m length perpendicular to each transect approximately at 30m intervals (Krebs et al. 1987, 2001).  The thin quadrats were sampled effectively by two persons in each field trip and the number of all fresh pellets of hare found inside the quadrats was recorded.  The new and old pellets were distinguished based on their colour. Only yellow colour pellets were considered as new.

The hare density in the study area was calculated from the pellet counts using the following equation (Krebs 1989).

where, the only variable is the pellet count per quadrat and other three are constant values.

In order to compare the sighting records in the two sites, we used independent samples t test.  Since the data set did not follow normal distribution (Kolmogorov-Smirnov value-0.00), we transformed the data to log 10 which confirmed normal distribution (Kolmogorov-Smirnov value -0.190).  During the study, the Indian Hare was found to be using the wind farm areas more (3.34 individuals/ hectare) than non-turbine area (1.37 individuals/ hectare) (t (df=56)=2.93, P=0.005). 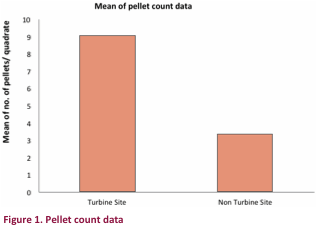 The higher use of the wind turbine area than the surrounding non-turbine forest areas by the Indian Hare is quite interesting.  The role of various possible determinant variables that might have caused this difference was not examined during this study, however, this result throws up a lot of new questions on the response of mammals to wind farm sites.  Multiple long termstudies only can confirm whether this observed pattern is consistent in wind farm sites.  A detailed investigation is needed on this aspect to identify the factors which help the population of hares thrive in wind farm areas.  The study from Portugal by Santos et al. (2010) showed a decline of vertebrate populations in wind farm sites.  The reasons for the decline included direct disturbances, structural habitat changes and behavioural segregations.  The Mediterranean region is known to be fire prone and the impact of wind farms is an additional threat to the biodiversity (Santos et al. 2010).  Behavioural changes of California Ground Squirrels Spermophilus beecheyiin terms of their anti-predator call in the presence of the background noise from the wind turbines are also reported (Rabin & Owings 2006; Kikuchi 2008).  The role of predatory pressures, competitors and forest fire regimes will be worth looking into in future studies for understanding the dynamics of mammal populations using wind farm area.  Long term studies can provide more insights into the role of wind turbines and associated factors in the habitat selection of such faunal species.  The present result indicate that apart from the well-known negative impacts of wind farms like mortality from collision of birds and bats with turbines, there are other ecological phenomena like synanthropic associations fostered among other faunal groups such as small mammals that need further scientific attention.