Copyright: © Irungbam & Irungbam 2018. Creative Commons Attribution 4.0 International License. JoTT allows unrestricted use of this article in any medium, reproduction and distribution by providing adequate credit to the authors and the source of publication.

Acknowledgements: We thank the Bhutan Trust fund for Environment Conservation (BTFEC), Bhutan for providing funds for equipment and field works, and  National Biodiversity Centre, Bhutan for coordinating the implementation of the project. We also thanks, Czech Science Foundation (GA CR: 14-36098G) and Grant Agency, University of South Bohemia (GA JU 152/2016/P) for supporting during the preparation of the manuscript. Finally, We thanks the anonymous reviewers and the Subject Editor for their critical comments.

Bhutan is one of the most isolated countries in the world situated at the eastern end of the Himalayan mountains.  The country is surrounded by India to the south, east and west and to the north by Tibet (Autonomous region of China).  The country covers an area of 38,394km2.  The landscape ranges from subtropical plains in the south to the Himalayan heights in the north.  The northern region of Bhutan consists of eastern Himalayan alpine shrub and meadows reaching up to glaciated mountain peaks.  In central Bhutan, the forest type consists of eastern Himalayan subalpine conifer forests in higher elevations and eastern Himalayan broadleaf forests in lower elevations.  In the south, the Shiwalik Hills are covered with dense Himalayan subtropical broadleaf forests, alluvial lowland river valleys, and mountains up to around 1,500m.  The foothills descend into the subtropical Duars Plain of Bhutan neighbouring the Indian Duars.  Thus, the forest of Bhutan harbours a rich diversity of flora and fauna, especially in terms of invertebrate fauna.  The least studied group of invertebrates in Bhutan is the moths whose data is still lagging behind.

The Lasiocampidae Harris, 1841 which are commonly known as the Lappet moths are among the families of moths which are poorly studied in Bhutan.  The family Lasiocampidae consists of 1,952 species (224 genera) worldwide (van Nieukerken et al. 2011).  The members of the family are generally large species with deep forewings and rounded hind wings; abdomen protruding well beyond the wings (Holloway 1987).  The Lasiocampidae fauna of the country have been poorly studied.  Earlier works on the fauna were conducted by Hampson (1892), Dudgeon (1901), Dierl (1975), and recently by Hauenstein et al. (2011).  So far, a total of 42 species of Lasiocampidae have been recorded from Bhutan.

Material and Methods: The study was conducted at different locations of four districts (Tsirang, Dagana, Sarpang, Gelephu) in southern Bhutan.  The collection of moths was undertaken opportunistically, as well as by setting up light traps at night using fluorescent lamps and Mercury vapour lamp.  Moths were observed overnight in all the locations from July 2010 to August 2015.  The moths were photographed using a DSLR camera and specimens were collected and killed using ethyl acetate fumes.  Later the specimens were sorted, pinned, labelled and identified to species level in the laboratory.  These voucher specimens are deposited in the Invertebrate Referral Collection Centre (IRCC), National Biodiversity Centre, Thimphu (Bhutan).

Results and Discussion: In total, we identified 10 species of Lasiocampidae, which belong to seven genera from Tsirang, Sarpang, Dagana and Gelephu districts of southern Bhutan.  Two species namely Kunugia siamka Zolotuhin, 2002 and Alompra roepki Tams, 1953 are new records for Bhutan.  Some earlier work done by G.S. Dudgeon (1901) in the early 19th century reported 14 species from Bhutan.  Later, W. Dierl (1975) recorded an additional five species of Lasiocampidae based on the collections of Bhutan Expedition 1972 by the Natural History Museum in Basel, Switzerland.  Recently, A. Hauenstein and his colleagues have reported 42 species of Lasiocampidae from Bhutan based on the collections made by A. Hauenstein and V.V. Sinjaev from 2003 to 2009 from different places of Bhutan (Hauenstein et al. 2011).  Thus, an updated checklist consisting of 44 species of the Lasiocampidae of Bhutan is provided in Appendix I.

Notes on the new records

Note: This species is recorded for the first time from Bhutan.  The species is earlier recorded from northern Thailand, Laos, Malaysia (Zolotuhin 2002; Zolotuhin & Ihle 2008).  The present record from Bhutan is a new range location and extension from its earlier known distribution.

Note: This species is recorded for the first time from Bhutan.  The moth has a reddish-brown fasciae and is slightly larger than Alompra ferruginea Moore, 1872, which is smaller, darker, with narrower forewings.  In the male, the forewings have convex margins centrally.  The valve in A. roepkei is divided but it is bifid in A. ferruginea (Holloway 1987).  The species was expected to be present as A. ferruginea was already found in Bhutan (Hauenstein et al. 2011).  Holloway (1987) recorded the species in Borneo from 1700m at forested localities and it is rare. 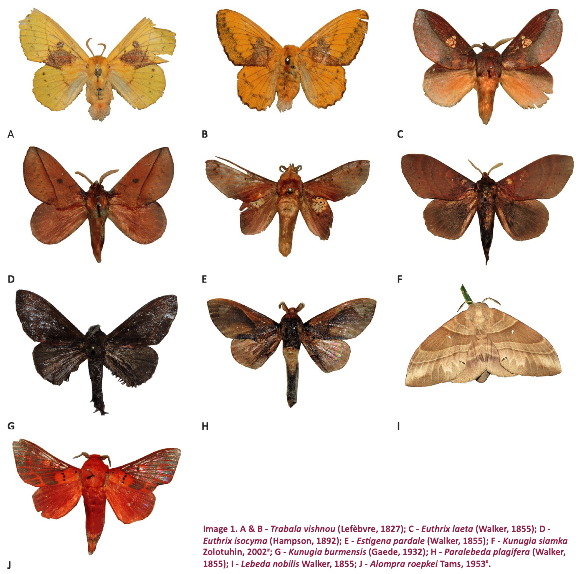 Zolotuhin, V.V. & A. Pinratana (2005). The Moths of Thailand 4: Lasiocampidae: An Illustrated Catalogue of the Lasiocampidae (Lepidoptera) in Thailand. Brothers of St. Gabriel in Thailand, 205pp+28pls.