Abstract: The Snow Leopard Panthera uncia is a rare top predator of high-altitude ecosystems and insufficiently surveyed outside of protected areas in Nepal.  We conducted a rapid camera-trapping survey to assess the presence of Snow Leopard in the Limi valley of Humla District.  Three individuals were recorded in two camera locations offering the first photographic evidence of this elusive cat outside the protected area network of Nepal. In addition to Snow Leopard, the Blue Sheep Pseudois nayaur, Beech Marten Martes foina, Pika Ochotona spp. and different species of birds were also detected by camera-traps.  More extensive surveys and monitoring are needed for reliably estimating the population size of Snow Leopard in the area.  The most urgent needs are community-based conservation activities aimed at mitigating immediate threats of poaching, retaliatory killing, and rapid prey depletion to ensure the survival of this top predator in the Himalaya.

Copyright: © Lama et al. 2018. Creative Commons Attribution 4.0 International License. JoTT allows unrestricted use of this article in any medium, reproduction and distribution by providing adequate credit to the authors and the source of publication.

Acknowledgements: This work was financially supported by Snow Leopard Network, Seattle, USA and Nagao Natural Environment Foundation, Tokyo, Japan.  Snow Leopard Conservancy and Global Primate Network Nepal provided camera traps and other field equipment.  Department of Forest/Government of Nepal provided the research permission to carry out this work.  We are thankful of K. Kandel, F. Huettmann, T. R. Ghimire and R. Jackson for their support and encouragement throughout the project.  A. Ghoddousi provided initial comments and I. Khorozyan provided a detailed review which helped improve this manuscript.  This work would not have been possible without the tireless support of local field assistants Chhapral Lama and Chhayang Lama.  We also thank all local people of the Limi Valley who supported us with vital information during the study.

The paucity of surveys and the resulting lack of reliable data for unprotected lands presumably increases leopard vulnerability to local extinction from poaching and retaliatory killing (R. Jackson pers. comm. 2017),  and lack of effective government actions against poaching and wildlife trade aggravates the situation.  Therefore, urgent collection of baseline data on Snow Leopard presence, distribution and status outside of PAs is warranted.  To date, information on distribution and status of Snow Leopard is mostly based on anecdotal evidence and few sign surveys (Jackson & Hunter 1995).  Due to challenging habitat structure, site accessibility and the cryptic nature of this felid species, direct sighting such as detection is virtually impossible (Jackson et al. 2006; Ale & Brown 2009).  Camera trapping is a preferred method for detecting such rare and elusive species.  In addition, sign surveys and local residents’ interviews generally lack scientific rigor for reliable status assessment (Jackson et al. 2006).  Considering these facts, we conducted the first ever camera-trapping survey of Snow Leopards in the Limi valley of Humla District of Nepal.  The findings of this study will make an important baseline for future monitoring and help government and conservation partners in conservation planning.

Limi Valley is located in the trans-Himalayan steppe environment in Humla District of Nepal (Fig. 1), covering an area of ca. 1200km2 and including three villages (Halji, Jang, and Til) with 181 households and a total population of 904 humans.  Historically, Limi residents depended on traditional barter economies and semi-nomadic animal husbandry.  Now, trans-boundary grazing restrictions imposed by China compel community members to reduce livestock holdings and search for new economic options.  Carving of Phuru, a wooden bowl made from maple knots, is an old and highly demanded economic activity for the people living in the upper part of Humla including the Limi Valley (R.P. Lama pers. obs. 2007–2015).  Trade and seasonal migrant labor work in the neighboring Chinese town also significantly contribute to the local economy.

We conducted a camera-trapping survey in the Limi Valley during July and August, 2015 to conduct a rapid assessment of Snow Leopard status.  We divided the total study area into 5x5 km2 grid cells considering 24km2 (11–37 km2) as the minimum home range of the Snow Leopard in western Nepal (Jackson 1996) and placed one or two cameras in each grid.  Due to time limitations we could not cover an entire study area and placed camera-traps only in the least disturbed locations where we frequently observed Snow Leopard signs.  We set up 17 Bushnell Trophy HD cameras in 17 locations (Fig. 1) within 10 grids following preferred habitat features like ridgelines, travel corridors and marking sites (Jackson et al. 2006).  A minimum distance between camera-traps was kept at 2.5km, and they were placed at elevations from 3,092–4,608 m.  Since the purpose of this preliminary survey was to assess the presence of Snow Leopard, we did not account for spatial autocorrelation of camera-trap sites.  One camera-trap was lost thus only data from the remaining 16 camera-traps were used in the analysis.

We managed camera-trap images using the program described by Sanderson & Harris (2013).  We defined capture events as independent images of a species at a location captured at least 60 minutes apart.  We computed the relative abundance index (RAI) for all the mammals, birds and human recorded during the surveys.  RAI was expressed as the number of independent images per 100 trap-nights (Sanderson & Harris 2013; Jenks et al. 2011).

Limi Valley is inhabited by people of Tibetan origin and the local culture is strongly influenced by Buddhist beliefs. Tibetan Buddhist monasteries serve as cultural centers for non-violence and conservation actions (T. Lama pers. comm. 2017); for example in the Sanjiangyuan region of Tibet, monasteries have played an important role in conserving Snow Leopards and their habitats (Li et al. 2013 ).  The Limi Valley is locally protected by the 1000-year-old Buddhist Monastery Rinchhen Ling, and no hunting and harvesting of medicinal herbs is allowed here.  People violating these rules are strictly fined; however, at present this area is vulnerable to encroachment by poachers and harvesters from outside, as the valley is rich in wildlife and medicinal and aromatic plants (R.P. Lama pers. obs. 2015).  Depredation of livestock by Snow Leopards and Wolves Canis lupus is frequent in the valley (R.P. Lama pers. obs. 2015), and leopards can also enter houses.  Fear of attack and economic losses have negative impacts on local livelihoods, and motivate retaliatory killings.  A female Snow Leopard was killed after a mass killing of goats (25 in a single night) in Halji Village in 2007 (FoN 2014).  Similarly, a female Snow Leopard with two cubs was trapped in Til Village in 2011 (FoN 2014) after being perceived as a threat to livestock.  A male Snow Leopard that entered Jang Village was killed in the winter of 2012 after attacking several goats inside a house (Local people pers. comm. 2015).

This survey confirms the presence of Snow Leopard in Limi Valley in Humla by successfully bringing the first photographic evidence to supplement previous local sightings and indirect signs.  Implementation of predator-friendly human-leopard interaction measures such as predator-proofed corrals, improved husbandry practices, conservation education and livelihood improvement programs are recommended to ensure the survival of Snow Leopards in the Limi Valley. 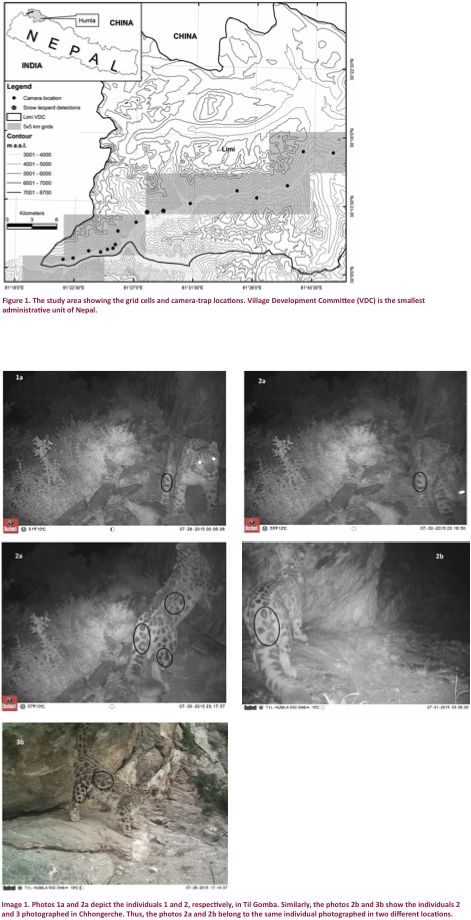 Table 1. The relative abundance index (RAI) and elevations of mammal, birds and human camera-trap record locations in the Limi Valley.