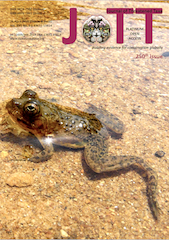 To improve the knowledge of non-volant mammal diversity and conservation prospects in the Dodo Coastal Forest (DCF) in southwestern CÃ´te dâ€™Ivoire, we conducted reconnaissance surveys and interviews, and deployed remote cameras.  We calculated visual encounter rates (vER) and sign ER (sER) of mammalian taxa and hunting signs, mapped their locations and tested the hypothesis that sightings and signs of primates occurred closer to the river Dodo in and near the gallery forest.  We sighted nine taxa, including threatened King Colobus (Endangered, EN), Olive Colobus (Vulnerable, VU), Loweâ€™s Monkey (VU), the Eastern Lesser Spot-nosed Monkey (VU), and White-bellied Pangolin (VU), with vER of 0.04, 0.12, 0.04, 0.12, 0.04, respectively.  We confirmed 14 other taxa with signs including threatened Western Chimpanzee (CR), Pygmy Hippopotamus (Endangered, EN), Bosmanâ€™s Potto (VU), and Black-bellied Pangolin (VU), with sER of 0.51, 0.04, 0.08, 0.04, respectively.  The most frequently encountered signs were of the Red River Hog at 1.73 signs/km, and the Bushbuck at 0.63 signs/km.  Remote cameras captured images of these two taxa at image capture rates (ICR) of 0.044 and 0.022, respectively.  Images of the African Buffalo were captured at ICR of 0.044.  The 23 confirmed taxa include seven primates, four rodents, three carnivores, six even-toed ungulates, two pangolins and a Tree Hyrax.  The mean distance from the river Dodo to the sightings and the signs of the primates was significantly shorter than that of other taxa.  This supports our hypothesis.  There was a high level of hunting signs (sER = 0.63) indicating that intensive hunting pressure is menacing the fauna.  We recommend that authorities take actions against poaching, install a surveillance program, and curtail charcoal-making to ensure the conservation of the threatened mammals of the DCF.

Dr Soiret is a postdoctoral researcher at the laboratory of Zoology and Animal Biology at the University FÃ©lix HouphouÃ«t-Boigny, CÃ´te dâ€™Ivoire and member of the research group Conservation of Natural Resources at the Centre Suisse de Recherches Scientifiques in CÃ´te dâ€™Ivoire. His research focuses on primates' ethology, their behavioural ecology and their conservation.

CÃ©lestin Yao KOUAKOU is junior lecturer at Jean Lorougnon GuÃ©dÃ© University at the UFR Environnement at the Laboratoire de BiodiversitÃ© et Ecologie Tropicale. He is also associate researcher at the CSRS in CÃ´te d'Ivoire. CÃ©lestin has trained teams and conducted wildlife surveys in CÃ´te d'Ivoire, Liberia, Guinea Conakry, Sierra Leone and Benin. His current research focuses on the ecology of primates and other animals, and their conservation in the west african region.

BÃ©nÃ© Jean-Claude KOFFI is a lecturer at Jean Lorougnon GuÃ©dÃ© University, a specialist in primate ecology. He is author or co-author of some 30 scientific articles on primates and other mammals, hunting and other anthropogenic pressures on wildlife. His studies have been conducted in CÃ´te d'Ivoire, Liberia and Guinea Conakry. He is Director of the Laboratoire de BiodiversitÃ© et Ecologie Tropicale de lâ€™UFR Environnement de lâ€™UniversitÃ© Jean Lorougnon GuÃ©dÃ© de Daloa, CÃ´te dâ€™Ivoire.

He is an associate professor of Zoology at the Zoology Lab at UniversitÃ© FÃ©lix HouphouÃ«t-Boigny in Abidjan, CÃ´te dâ€™Ivoire. Heâ€™s research interest mainly focuses on animal biology and ecology of west African small mammals (Rodents, shrews and bats), particularly those from CÃ´te dâ€™Ivoire, Guinea and Liberia.

Philippe KOUASSI is Professor of Zoology at the Zoology Laboratory at UniversitÃ© FÃ©lix HouphouÃ«t-Boigny (UFHB) in Abidjan, CÃ´te dâ€™Ivoire. He has several research activities, but he is research interest mainly focuses on entomology, animal biology and ecology. He is president of the scientific Council of the UFR Biosciences at the UFHB.

PeÃ±ate JosÃ© GOMEZ is the Director of the Conservation des EspÃ¨ces Marines (CEM), a local NGO of CÃ´te dâ€™Ivoire. He works on the country's most important nesting beach areas for endangered sea turtles. At the same time, CEM contribute improving infrastructure (water systems, solar power, schools, etc.) in the coastal villages of the Southwestern CÃ´te dâ€™Ivoire

Reiko MATSUDA GOODWIN is an adjunct professor of biological anthropology at Fordham University in New York, USA. Her research focuses on the biogeography and conservation biology of West African primates. She has conducted research on a number of primate taxa in Nigeria, Benin, Togo, and in CÃ´te d'Ivoire

Inza KONE is lecturer at the laboratory of Zoology and Animal Biology at the University FÃ©lix HouphouÃ«t-Boigny, CÃ´te dâ€™Ivoire. He is currently Director of the Centre Suisse de Recherches Scientifiques en CÃ´te dâ€™Ivoire (CSRS) and the African Primatological Society. His research focuses on the ecology and conservation biology of African primates.