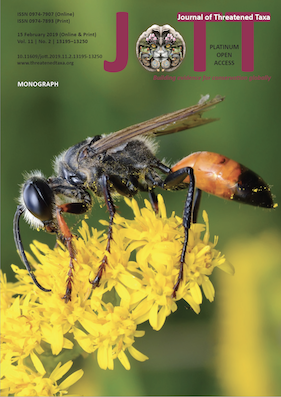 Information is presented on 249 vespine species from 11 families in two regions of Mordovia (including Mordovia State Nature Reserve (MSNR)) and three districts of Nizhny Novgorod region (including Sarov) in Russia.  Of these, 31 species are new to the Republic of Mordovia.  Fauna of separate families of wasps in Mordovia State Nature Reserve is represented by 220 species: one species in Bethylidae, 31 in Chrysididae, two in Tiphiidae, two in Mutillidae, one in Scoliidae, 28 in Pompilidae, 37 in Vespidae, nine in Sphecidae, 108 in Crabronidae, and one in Trigonalyidae.  The biodiversity of wasps in the reserve is very high.  Of the 283 species of wasps in Mordovia, 220 (77.7%) are found within the reserve.  Species characteristics such as geographic distribution and certain aspects of biology are also provided.  There is an obvious extension of the ranges of three species, Priocnemis fastigiata, Sceliphron deforme, and Scolia hirta, to the north.

Ðlexander B. Ruchin, Doctor of Sciences (in Biology), docent. Director of the Joint Directorate of the Mordovia State Nature Reserve and National Park â€œSmolnyâ€. Honoured Ecologist of the Republic of Mordovia. Member of the Association Board of Directors of Russian Nature Reserves and National Parks. Member of the Public Chamber of the Republic of Mordovia. He consists in the Expert Council on Protected Areas of the Ministry of Natural Resources of Russia. He is a member of the Saint Petersburg Union of Scientists, the Society of Biotechnologists of Russia, the A.M. Nikolsky Herpetological Society, the Russian Entomological Society.