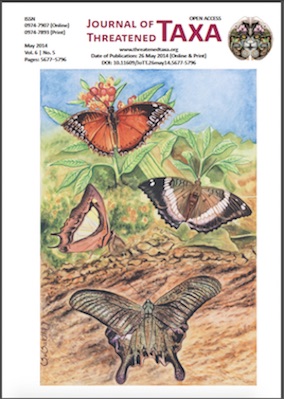 The present study was carried out in three different habitat types within the Mihintale Sanctuary, namely aquatic, undisturbed forest and disturbed habitat from November 2008 to May 2009. The main objective of the study was to determine the species diversity and identify the threats to the birds. Line transect, point counts and opportunistic survey methods were conducted daily both in the morning and evenings. A total of 130 species of birds belonging to 47 families including 111 breeding residents, 19 winter visitors, four endemic species and four species that are being proposed as endemic species were recorded. It also included 10 rare species, one very rare winter visitor, Zoothera citrina, six nationally threatened and one globally threatened species, Pelecanus philippensis. The number of bird species that were observed in the aquatic habitat, forested habitat and the disturbed habitat were 93, 40 and 76 respectively. The results indicate that diversity of birds was significantly higher (p less than 0.05)in the aquatic habitat. It was revealed that the aquatic habitat provides more suitable niches and food resources for a wide variety of birds. Therefore, species diversity near aquatic habitat was higher compared to that of the forest. Fragmentation of forest into small patches, hunting birds for food and presence of natural predators are the major threats to the avifauna in the sanctuary. Thus, strategies should be developed to conserve the avifaunal diversity in the forest patches. The sanctuary supports different types of native bird species of Sri Lanka and is identified as one of the IBAs in Sri Lanka, it therefore plays an important role in the conservation of birds in Sri Lanka.