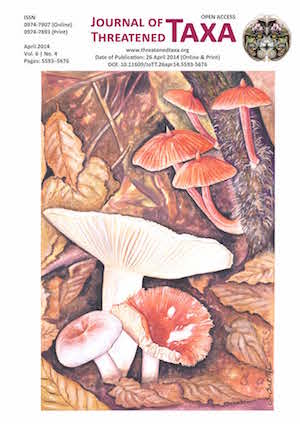 Most parts of the Adyar wetland complexâ€”Chembarampakkam Tank, Adyar River, Adyar Estuary and Adyar backwater (including a wetland rehabilitation site)-â€”were sampled for ichthyofaunal diversity from March 2007 to June 2011. A total of 3,732 specimens were collected and 98 taxa were identified. Twenty-two new records are reported from the estuarine reach. Forty-nine species were recorded at Chembarampakkam Tank. In the upriver stretch 42 species were recorded. In the middle stretch 25 species were encountered. In the lower stretch only five species were recorded. This lack of diversity in the lower stretch of the river can be directly linked to pollution, especially the lower reaches from Nandambakkam Bridge to Kotturpuram which exhibit anoxic conditions for most of the year. In brackish, saline and marginal waters of the estuarine reach 66 species were recorded, of which 47 occurred in the estuary proper, 34 at the point of confluence with the Bay of Bengal and 20 in the backwater which forms the creek. At the rehabilitation site, popularly referred to as the Adyar Eco Park, which is the westernmost region of the backwater, 28 species were recorded in 2011 which is a sharp increase from just four in 2007 when the area was an environmental disaster. A significant finding was Mystus cf. gulio which showed a marked morphometric difference concerning its maxillary barbels and efforts are on to discern its taxonomic status.