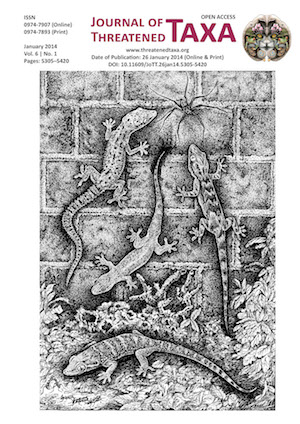 The diversity of freshwater catfish species of the Krishna River, Sangli District was studied from June 2009 to July 2012. The study area covered 105km from Karad City where the Koyna tributary joins the Krishna River up to Mhaishal, the state border of Maharashtra. It was divided into three streams for convenience, i.e., the upper stream starts from Karad and goes up to Takari, the middle stream from Takari to Bhilawadi and downstream from Bhilawadi to Mhaishal. A total of 13 species of catfish belonging to five families and 10 genera were recorded. The Bagridae family was dominant with six species, whereas Siluridae, Schilbidae and Clariidae had two species each and Sisoridae with one species. We have provided range extension for an endemic and threatened sisorid catfish Glyptothorax poonaensis. The occurrence and distribution of catfishes was more or less equal in number along the study area. The maximum number of species recorded was nine from the upper stream, whereas the middle and down streams had eight and seven species respectively. The distribution of catfish along the Krishna River system may be due to the slow and steady state water movement and its width that ensure the continuous availability of nutrition. It is suggested that the Krishna River would be a suitable habitat for the conservation of freshwater catfish if the threats are minimized.