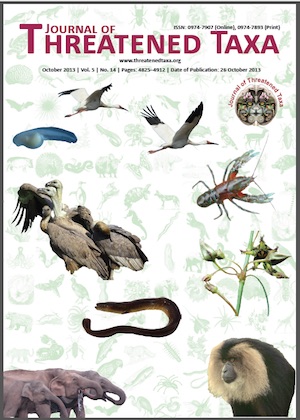 The Western Ghats region is a global biodiversity hotspot and the source of all the major rivers of peninsular India. The conservation of this region is important for the biodiversity it harbours, and for ecological functions that include climate stability, erosion control, clean water and air, which are essential to safeguard economic growth, social stability and quality of life for the people of peninsular India. Possessing a unique diversity in topography, climate, vegetation, faunal communities, endemism and human communities, the Western Ghats is also known for its spectacular assemblage of larger mammals, including 25% of the global population of Asian Elephants. There are four major landscapes in the Western Ghats: (1) Uttara Kannada, (2) Brahmagiri-Nilgiris, (3) Anamalai-Nelliyampathy-High Range, and (4) Periyar-Agasthyamalai, spread across 30,000km2, harbouring a minimum 10,000 elephants in six different populations with signs of an increasing trend in some populations. The second landscape (Brahmagiri-Nilgiris) with over 50% of the Ghats elephant population, along with its contiguity to the Eastern Ghats elephant landscape, forms the single largest global population of Asian Elephants. However, major threats to the long-term conservation of the elephant include further fragmentation of habitat, continued poaching of bulls for ivory, and escalation in human-elephant conflicts resulting in public antagonism toward the species. The goals of management should thus be to: (1) consolidate habitats and preserve corridors to avoid further fragmentation; (2) take steps through integrated land use planning at the landscape level to reduce human-elephant conflicts; and (3) build up a demographically and genetically viable elephant population by protecting the tusked males from ivory poaching. Being a wide-ranging umbrella species, ensuring the long-term conservation of Asian Elephants in the Ghats implies protecting its biodiversity and ecological functions that also safeguard the livelihood of several million people.