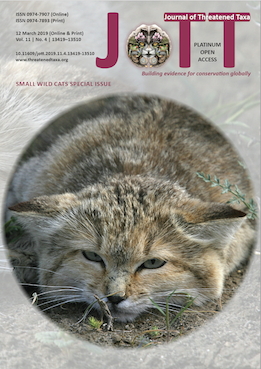 This article provides information about 27 records of the Caracal Caracal caracal in Uzbekistan, particularly in the Kyzylkum Desert and the Ustyurt Plateau.  The data collected between 2011 and 2017 were based on information from literary sources, field research, and interviews with local people.  At least 11 individuals of the species were killed intentionally and one was run over by a car.  Basic threats to the species in Uzbekistan are negative interactions between herders and Caracal, lack of knowledge about its protected status among local people, and lack of conservation measures.  The preconditions for the protection of Caracal are the existence of remote unpopulated areas close to state borders between adjacent countries and socio-economic factors that prompt people to move from rural to urban areas.  Caracal habitats are protected in Kyzylkum State Reserve, Saigachiy Landscape Sanctuary, and six wildlife sanctuaries.  To conserve Caracal, it is necessary to strengthen the network of protected areas in deserts and raise the awareness of local communities and decision-makers in the national government.  It is important to continue research on Caracal and develop a government-approved action plan for its conservation.

Mariya Alexeevna Gritsina, Institute of Zoology, Academy of Sciences of the Republic of Uzbekistan, Tashkent 100047, Uzbekistan.