Copyright: © Kumar 2022. Creative Commons Attribution 4.0 International License.  JoTT allows unrestricted use, reproduction, and distribution of this article in any medium by providing adequate credit to the author(s) and the source of publication. 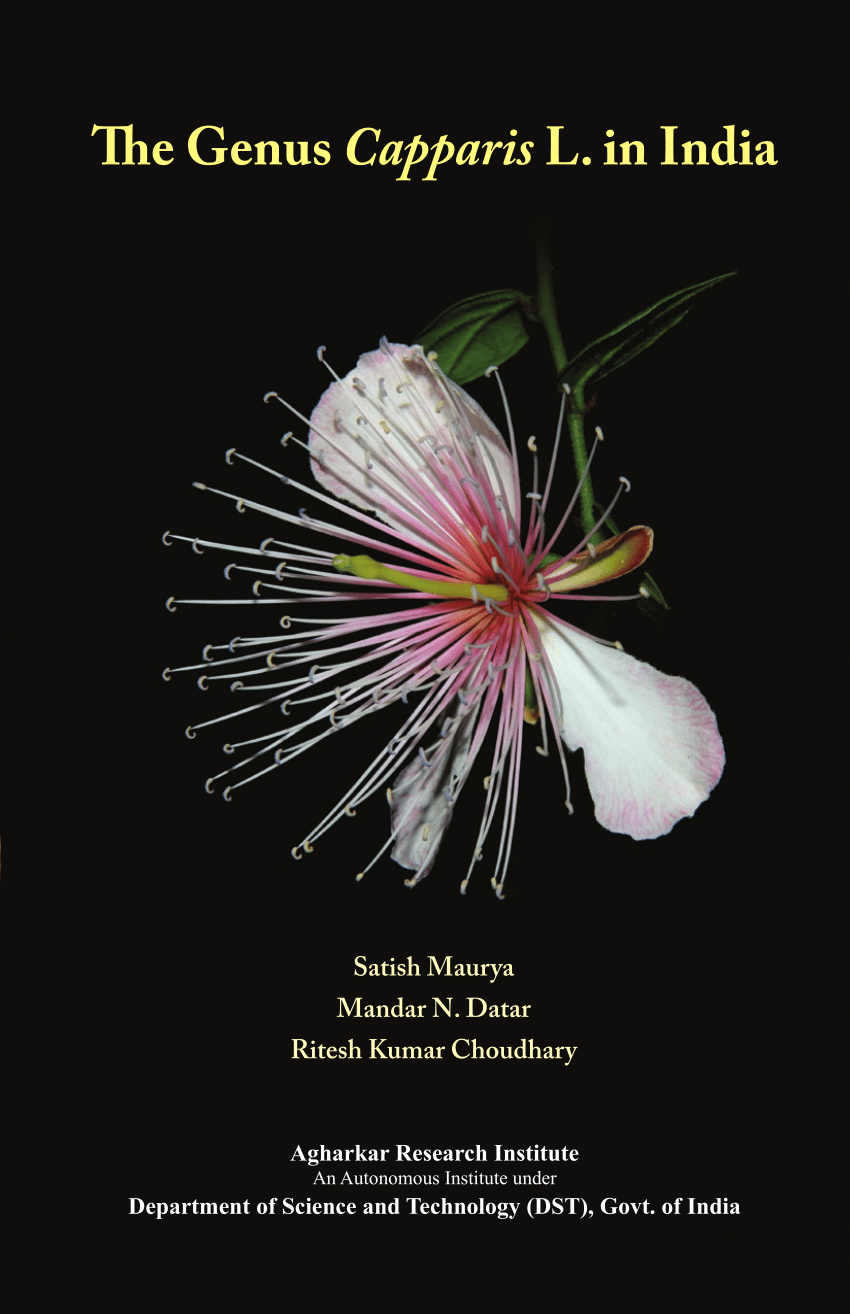 The Genus Capparis Tourn. ex L. is distributed almost throughout the old world especially in tropical and subtropical regions with about 140 species. In this book, Maurya et al. concisely presented the Capparis account in India by recognizing 34 species and one subspecies. However, Mastakar et al. (2020), listed 37 taxa (31 species, 5 subspecies and 1 variety) under Capparis in “Flowering Plants of India, An Annotated Checklist (Dicotyledons)”, which is mainly based on the work of R.S. Raghavan (1993) in “Flora of India”, who recognised only 29 species. The major difference among these works are, Maurya et al. considered the three subspecies of C. acutifolia Sweet as separate species.

The book is handy with 92 pages and easy to use, starts with a very brief introduction, which includes review of literature, the genus distribution in the world and in the Indian subcontinent, table showing its food and medicinal uses of Capparis species and finally materials and methods as well as data presentation in the book. The taxonomic account begins with the key to the sections in the genus and to the species represented in India. Keys to all the four sections are well illustrated with the photographs of the live plants showing diagnostic characters, by which one can easily identify their specimens instantly to the sectional level. The species are arranged section wise, the section Monostichocalyx is represented in India by 30 species out of 34 recognised in this work and the section Capparis by two species and one subspecies, indeed the section Sodada is a monotypic and the remaining one section Busbeckea is represented in India by only one species.

Under each species basionym if present and selected synonyms only are cited, but the descriptions are well written. The diagnostic characters, type, etymology, phenology, common English/vernacular names, distribution, specimens examined and uses if any were given for each taxon. In fact, in the Tabular form, the Food and Medicinal uses of the 23 taxa (22 species and one subspecies) are well presented in ‘Introduction’ chapter itself. For most of the species ideally illustrated photo-plates are presented and for some the herbarium specimen’s images are reproduced for easy identification. Apart, in each species, a good distribution map is also provided to get a glimpse of the particular species distribution in Indian political boundary.

The key to the species is well prepared with good opposite characters, in which the only one subspecies also added by which the 35 taxa are keyed out in 34 couplets. Since the species are arranged section wise, it would have been better if they would have mentioned species number against each species in the key. For making the book compact, under each species, important synonyms are only cited, which made two-third of them are only with accepted name citations! Actually, the authors should have included more synonyms especially of the names published from the Indian subcontinent. For example, the species Capparis wallichiana Wight & Arn. and C. heyneana Wall. ex Wight & Arn. described in the “Prodromus Florae Peninsulae Indiae Orientalis” (1834) should have been included.

Although the descriptions are written somewhat in detail, the authors should have maintained the uniformity as far as possible since the number of species represented in India are very less. A glaring mistake to be pointed out here is, in some descriptions the colour of the petal is given under “Flower” while in some in “petal”. Similarly, the usage of singular and plural also should have been taken care, e.g. described ‘blades’, ‘petioles’ in most species while in some ‘blade’, ‘petiole’ are used.

It seems the authors have made good effort in galley proof reading, the book is almost devoid of any spelling errors. However, they should have noticed Capparis bodinieri H.Lév. and C. acutifolia ssp. bodinieri (A.Lév.) M. Jacobs, and should have used either one of the author standard form for Augustin Abel Hector Léveillé. In the subtitle of ‘Capparis in the Indian Subcontinent’ under the “Introduction” chapter, the authors forgot to mention the name Myanmar (Burma), although in the map (Fig. 2) they provided the location of different Capparis species distributed in Myanmar. Similarly, they should have detected the error of mentioning ‘Endemic’ in the distribution of Capparis brevispina DC., where it is mentioned as “INDIA: Endemic to Peninsular India … and SRI LANKA”. Further, placing of Capparis versicolor Griff. under ‘Excluded species’ is not properly justified.

At the end, Bibliography and Index are provided. Indeed, it is the shortest and one page index ever produced in a taxonomic account comprising only just more than a 50 names for 35 accepted taxa. Although good number of references are provided in the Bibliography, standard procedure to cite the references are not followed and in some, citations are also wrong. The main purpose of giving reference is to enable the readers to find those literature, but citing them in short form, may not help in anyway.

In overall aspect, the book on Capparis in India is a good work, it is an updated version for the work done by the Late R.S. Raghavan, who published this genus account in “Flora of India, volume 2” in 1993. This book should be purchased and kept in the libraries of colleges, universities and research organizations dealing with the Life Science. Hope the authors will take care some of the demerits pointed out above while publishing the revised edition or the molecular phylogenetics of the Capparis in India.