Copyright: © Platt et al. 2018. Creative Commons Attribution 4.0 International License. JoTT allows unrestricted use of this article in any medium, reproduction and distribution by providing adequate credit to the authors and the source of publication.

Despite being one of the most common and widely distributed varanids in South and Southeast Asia (Bennett et al. 2010; Das 2010; Chan-ard et al. 2015), the distribution of the Water Monitor Varanus salvator (Laurenti, 1768) within Myanmar remains poorly delineated, particularly for the central and northern regions of the country (Cota et al. 2009; Sai Sein Lin Oo & Bates 2016).  Smith (1935) stated that V. salvator was “plentiful throughout Burma” [now Myanmar] without mentioning any specific localities.  Anderson (1878) and Boulenger (1888) reported specimens of V. salvator from the Bhamo and the Kachin Hills, respectively.  Cota et al. (2009) suggested these earlier records could be in error, perhaps representing specimens obtained in markets or transported as food, and further noted that extensive collecting by research teams from the California Academy of Sciences failed to record V. salvator anywhere in central and northern Myanmar.  More recently, Oo & Bates (2016) confirmed the occurrence of V. salvator in north-central Myanmar after photographing a large adult in Bhamo and finding a locally-collected specimen being offered for sale at a market in Banmauk, about 140km west of Bhamo (Fig. 1).  Sai  Sein Lin Oo & Bates (2016) concluded these records either (1) represent an isolated and perhaps relict occurrence or (2) the distribution of V. salvator extends up the Ayeyarwady River and its tributaries.

We herein present two additional photo records, which further document the distribution of V. salvator within northwestern Myanmar (Fig. 1).  The first record was obtained on 26 April 2016 when one of us (MMW) photographed a juvenile (total length [TL] ca. 90–100 cm) V. salvator while traveling by boat along Nam Pi Lin Stream (25.6830N & 95.6360E; elevation ca. 100m) in Sagaing Region (Image 1).  The monitor was basking on a log extending from a steep bank and over-hanging the stream, and dropped into the water as the boat approached.  Nam Pi Lin Stream is encompassed within the boundaries of Htamanthi Wildlife Sanctuary.  The habitat along this section of the stream is dense riparian forest and bamboo thickets transitioning into old-growth evergreen forest with increasing elevation away from the water.  Additional information on the vegetation and physiography of Htamanthi Wildlife Sanctuary is provided by Beffasti & Galanti (2011).

The second photo record was obtained when a large adult V. salvator (TL ca. 150cm) was “captured” on a game camera deployed about 0.25km south-east of Limpha Village (25.8080N & 95.5360E; elevation ca. 132m) in Sagaing Region. The game camera (Moultrie Series A) was set in a densely vegetated seasonal swamp along the Chindwin River beside the carcass of a young domestic Water Buffalo Bubalus bubalis (Linnaeus, 1758) that had perished after becoming mired in deep mud.  The motion-sensitive game camera (programed to take three photographs at 1-min intervals) was deployed from 17 February to 6 March 2018 (17 trap-nights) and captured a sequence of six images (1324-1326 hr) of a Water Monitor on 1 March (Images 2A–F).  The first image shows the monitor with head and neck extended back and upwards in a near-vertical position usually exhibited when swallowing (Image 2A).  The monitor then investigates the remains of the carcass (Image 2B–C) and moves across and away from the camera (Image 2D–F).  At the time these photographs were taken the buffalo carcass consisted of little more than bones in a pool of fetid muck (Stage 6 of Payne 1965).

Our photo records from Nam Pi Lin Stream and Limpha Village extend the known distribution of V. salvator in Myanmar approximately 170km north and westwards of the recent records from Bhamo and Banmauk (Oo & Bates 2016).  Collectively, these records strongly suggest the distribution of V. salvator extends up the Ayeyarwady and Chindwin Rivers into northern and northwestern Myanmar.  We see no reason to assume these records represent an isolated relict occurrence of V. salvator in northern Myanmar as suggested by Sai Sein Lin Oo & Bates (2016).  Given the lack of apparent geographic barriers to dispersal, we further suggest the distribution of V. salvator extends at least as far north as the Hukaung Valley in Kachin State.  Obviously additional investigation will be required to resolve these biogeographical questions. 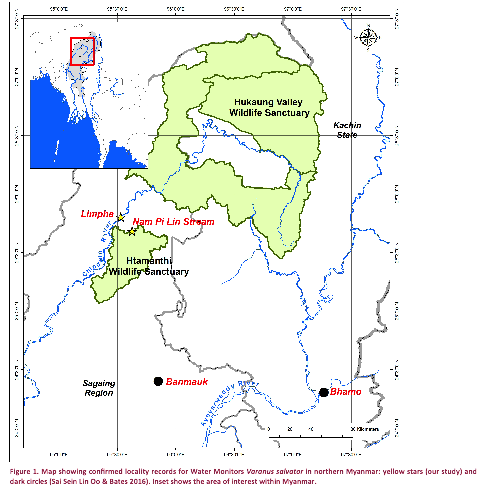 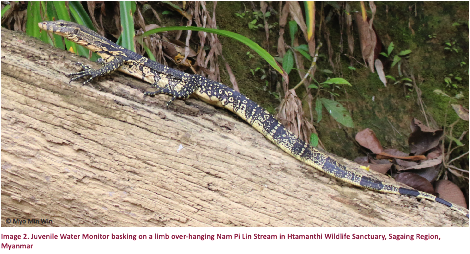 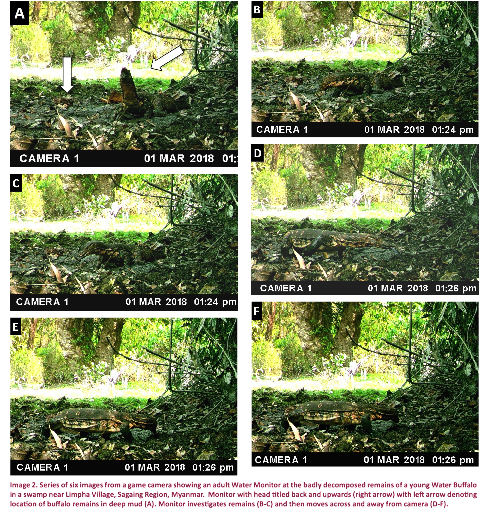 Anderson, J. (1878). Anatomical and zoological researches: comprising an account of the zoological results of the two expeditions to western Yunnan in 1868 and 1875; and a monograph of the two cetacean genera, Platanista and Orcella. Bernard Quaritch, London, 985pp.