Copyright: © Elliott et al. 2018. Creative Commons Attribution 4.0 International License. JoTT allows unrestricted use of this article in any medium, reproduction and distribution by providing adequate credit to the authors and the source of publication.

Acknowledgements: Funding from The Scientific and Technological Research Council of Turkey, project number T-BAG-111T530, enabled the fieldwork.  We are grateful to Pouri Rakete-Stones for collecting scats from New Zealand populations of hedgehogs.  We appreciate input from Allein Stanley of the Schiele Museum, Bob and Babs Strickland of Walnut Creek Preserve, Andrew Claridge of New South Wales Office of Environment and Heritate, and Karl Vernes, University of New England, New South Wales.  We appreciate the help of Şerife Çaka, Mehrican Yaratanakul Güngör, and Cansu Korkmaz in specimen processing and operation of the microscope lab.

Fungi contain important dietary components such as water, essential amino acids, protein, fat, carbohydrates, and crude fiber (Hussain & Al-Ruqaie 1999; Claridge & Trappe 2005; Wallis et al. 2012).  Fungi appear in a wide array of animals’ diets around the world (Fogel & Trappe 1978; Blaschke & Bäumler 1989; Claridge & May 1994; Hanson et al. 2003; Schickmann et al. 2012).  Despite the prevalence and importance of fungi as animal food, mycophagy has been understudied/unreported even among otherwise well-researched animal species.  For example, we provide the first confirmed documentation of mycophagy by Erinaceus concolor (Martin), the Eastern European Hedgehog.  This small mammal has been frequently reported to eat insects, snakes, and plant matter (Özen 2006).  Naem et al. (2015) note that “…mushrooms may supplement the diet” of the West European Hedgehog, E. europaeus (L.); but their evidence for this statement is unclear and the species of mushrooms are not indicated.  New Zealand has a diversity of hypogeous fungi and a large population of invasive hedgehogs, E. europaeus, that likely consume local fungi, but this has yet to be confirmed (Wood et al. 2015).  As part of this study we conducted microscopic examinations of 30 scats collected from E. europaeus in New Zealand and we found no fungal spores.  These scats were collected by collaborators and we were unable to determine if many fungi were fruiting during the sampling period.

Santana et al. (2010) mention African Four-toed Hedgehogs, Atelerix albiventris (Wagner), eating fungi, but it was not recorded how this or the species of fungus consumed was determined.  Skinner & Chimimba (2005) mention fungi in the diet of the southern African Hedgehog A. frontalis (A. Smith), but we were unable to determine the original source of their report, and they do not indicate the identity of the fungi consumed.  Members of the hedgehog genera Hemiechinus, Mesechinus, and Paraechinus have either had inadequate seasonal dietary studies or insufficient microscopic examination of fecal or stomach samples to determine their mycophagist status.

During mycological fieldwork in March and April 2014 in Muğla-Ula, Turkey, we encountered an Eastern European Hedgehog.  Erinaceus concolor (Image 1a) crossing the road in a plantation of Umbrella Pine Pinus pinea (L.).  The understory was predominantly Kermes Oak Quercus coccifera (L.), and Cistus spp. accompanied by a diverse ectomycorrhizal fungal community.  Our interest in mycophagy and hypogeous fungal spore dispersal led us to wait and collect a fecal sample from the animal.  The fecal sample we collected was dried and once at the laboratory, several small pieces were placed with forceps into drops of ethanol on microscope slides.  After several minutes the ethanol evaporated and the structures softened.  Then water and a cover slip were added and the slide studied with a binocular compound microscope at × 100, × 400, and × 1000 magnification.  Additional slides were mounted in Meltzer’s reagent to test for taxonomically diagnostic staining reactions of fungal structures; all tests were nonresponsive.  Micrographs were taken in water.  Percentage volume of fungal material in the slide mounts was estimated by visual scanning.  To increase sample size we attempted to find additional individuals to collect scats  by spotlighting, but the thick understory and brief time at the site prevented success.

Pieces of fungal tissue and masses of spores composed at least 90% of the Turkish fecal sample.  The fungal tissues were characteristic of the false truffle genus Rhizopogon (Image 1b).  Fungal surveys in the area where the E. concolor was found revealed prolific fruitings of Rhizopogon vulgaris (Image 1b).

This observation provides strong evidence of gaps in our understanding of the dietary behavior of this and other species of hedgehogs.  Historically, the use and importance of fungi has been frequently overlooked in animal dietary studies, and that is likely true for hedgehogs.  We had one fecal sample from one individual, insufficient for broad conclusions on behavior and dietary preferences of E. concolor or related species, but the large volumes of spores and chunks of fungal tissue in the sample examined (Image 1 c,d) indicate preferential or opportunistic consumption of Rhizopogon vulgaris over other food sources.  Our estimate of 90% fungus by volume in the scat sampled shows that Eastern European Hedgehogs are opportunistic or possibly preferential mycophagists and we encourage researchers working on this and other species of hedgehogs to apply similar methods to test that hypothesis. 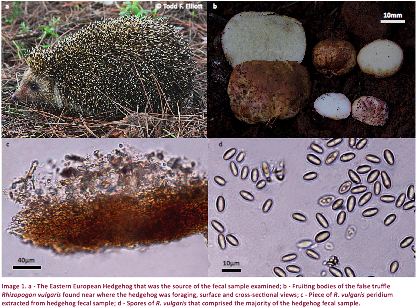