A reassessment and lectotypification of the name Striga masuria (Buch.-Ham. ex Benth.) Benth. (Orobanchaceae) and its collection from the Western Ghats of India

Copyright: © Omalsree & Sreenivas 2018. Creative Commons Attribution 4.0 International License. JoTT allows unrestricted use of this article in any medium, reproduction and distribution by providing adequate credit to the authors and the source of publication.

Acknowledgements: Authors are grateful to the personnel of the following herbaria: CAL, MH, K and E for permitting to do this research; Dr. K.A. Sujana, M.C. Shameer, Dr. V.K. Suresh, Sojan Jose for their support and two unknown reviewers for their help to improve the manuscript.

The genus Striga Loureiro belongs to the family Orobanchaceae and comprises about 43 species (Omalsree et al. 2015) with the highest diversity in tropical Africa (Mohamed et al. 2001; Fischer et al. 2011).  Out of this, nine species have been recorded so far from India, including the recent addition of three new species, viz. Striga kamalii Omalsree et al. (2015: 166), S. indica Prabhu et al. (in Jayanthi et al. 2013: 284) and S. scottiana Jeeva et al. (2012: 79).  As a part of the ongoing taxonomic revision on the genus Striga in India, the authors collected one unknown species of Striga from the Chennai region of Tamil Nadu State in 2015.  Further studies based on relevant literature and comparison with type specimens confirmed its identity as Striga masuria (Buch.-Ham. ex Benth.) Benth.  Striga masuria was described by Bentham based on two collections from the Morang Hills of Nepal (Hamilton 1810) and Prome of Myanmar (Wallich 1826).  Later, Hooker (1884) reported this species for India based on Shutter’s collection in 1880 from the Guindy region of Tamil Nadu.  Since then, there have been no reports about this species from any part of India.  The present recollection of this taxon from Chennai is the collection of the plant after 135 years (Images 1, 3).

The detailed taxonomic studies based on fresh specimens revealed that the character of the plant shows close similarities with its allied species in the section Polypleurae, S. angustifolia (D. Don) Saldanha by means of the pubescent nature of the plant, white corolla lobes and 15-ribbed calyx lobes.  The only differences observed are the length of the plant, the loosely arranged flowers and closely positioned ribs on calyx lobes.  These characters are not strong enough to retain its species status and are reduced as a variety under S. angustifolia. During the present study, it was observed that no type has been designated to this taxon and the lectotype are also designated here according to Art. 9.3 of the ICN, Shenzhen code (Turland et al. 2018).

Distribution: In India, the plant is narrowly endemic to Kerala and Tamil Nadu states, the southern part of the Western Ghats (Image 2).

Nomenclatural notes: Hamilton proposed the name Buchnera masuria based on his own collections from Morang mountains on 28 July 1810.  Subsequently, Bentham proposed the name B. wallichi based on Wallich’s collections from Prome of Myanmar on 09 October 1826.  Both names are mentioned only in Wallich’s catalogue numbers 3877 and 3876 respectively without giving any additional information such as description of the plant (nomen nudum).  Later Bentham (1836) validated the name Buchnera masuria Ham. and synonymized the name B. wallichi Benth. under B. masuria.  In that protologue, Bentham mentioned two collections, one by Hamilton for B. masuria (mountains of Morang, Nepal) and the latter by Wallich for B. wallichi (Prome, Burma).  During the study, we have traced six specimens, which represent duplicates from a heterogenous collection, four specimens at K and two specimens at E.  All the sheets are well preserved and bear flowers.  We found three specimens each from both the localities which were deposited two at K and one at E.  According to Art. 9.3 of the ICN, Shenzhen code (Turland et al. 2018), the specimen kept in E (1419, E barcode E00273651 [digital images!]) fits the description, and is preserved very well with collection number, locality and collector name, which is considered as the best choice and designated here as the lectotype (Image 3). 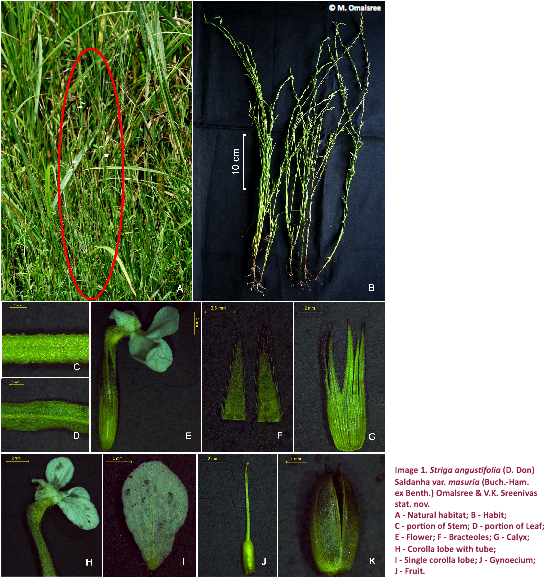 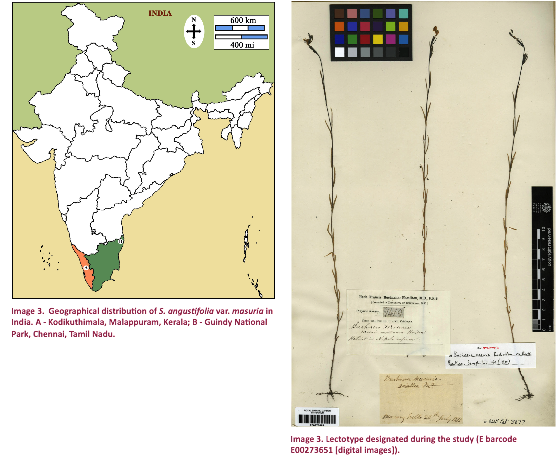