Diversity and endemism of butterflies of montane forests of Eravikulam National Park in the Western Ghats, India

Copyright: © Sreekumar et al. 2018. Creative Commons Attribution 4.0 International License. JoTT allows unrestricted use of this article in any medium, reproduction and distribution by providing adequate credit to the authors and the source of publication.

Acknowledgements: We thank Dr. Saji, K. for helping us to confirm the identity of the butterfly species and Sevantharaj for the support in the field. We are grateful to Abha, M.K., Abhirami, M.J., Anjali, J., Arjun, R., Devika, V.S. and Syamili, M.S., for various support. We also express our gratitude to Wildlife Warden, Munnar Wildlife Division and Assistant Wildlife Warden, Eravikulam NP for the logistics support. Dean, College of Forestry, Kerala Agricultural University is acknowledged  for encouragement and support. We are grateful to the anonymous reviewers and the Subject Editor for their critical comments and useful inputs.

The Western Ghats is one of the biodiversity hot spots of the world (Myers et al. 2000).  This region is rich in endemism including butterflies and has been of great interest for biogeography.  The natural habitats in the Western Ghats is under tremendous pressure from the biotic influences (Jha et al. 2000; Mittermeier et al. 1998).  Butterflies are suitable for biodiversity studies, because their taxonomy and geographic distribution are better understood compared to many other taxonomic groups (Pandhye et al. 2012).  Butterflies are also regarded as good indicators of habitat quality as many species exhibit habitat preferences and seasonality (Larsen 1988; Kunte 1997).  Butterflies are sensitive biota, which get severely affected by environmental variations and changes in forest structure (Pollard 1991).  India has around 1,501 species of butterflies, out of which 336 species have been reported from the Western Ghats (Kunte et al. 2018).  Of the 336 species of butterflies of the Western Ghats, 316 species have been reported from Kerala (Palot et al. 2012).

Climate: Eravikulam has a tropical montane climate.  The average annual rainfall is about 5,000–6,500 mm.  The area receives both south-west as well as north-east monsoons.  The mean monthly minimum temperature is 11.90C, while the mean monthly maximum temperature is 22.50C.  The altitude of ENP ranges from 1,800–2,695 m, typical of a montane landscape and the highest peak is Anamudi (2,695m).

Vegetation: The major plant communities found within ENP are grasslands, shrub lands, and forests.  The terrain above 2,000m is covered primarily by grasslands (~60%), about 25% by shola forests, 8% by southern sub-tropfical hill forest, and 7% by shrubs (Menon 2001).

The study was conducted from September 2014 to December 2014.  The whole of the study area was divided into nine blocks based on topography and drainage (Table 1) and five days each were spent on each of these blocks.  At each basecamp two to three hour long transects were walked in the morning from 10:00–13:00 hr.  No afternoon transects could be done because of the unfavourable weather conditions, such as mist, cloud and northeastern monsoon rains.  During these transect walks, the butterflies were identified to the species level and the number of individuals were counted.  Attempt was also made to photo-document every species of butterflies sighted.  The butterflies were identified using the field guides of Kunte (2000) and Kehimkar (2008), and for taxonomy and nomenclature, we followed Kunte et al. (2018).

A total of 85 species of butterflies belonging to six families such as, Papilionidae (10 species), Pieridae (15), Nymphalidae (36), Riodinidae (1), Lycaenidae (9), and Hesperiidae (14) (Table 2) were identified from the montane habitat of ENP.  This included eight species that are endemic to the Western Ghats.  They are Sahyadri Birdwing Troides minos, Nilgiri Clouded Yellow Colias nilagiriensis, Red-disc Bushbrown Heteropsis oculus, Nilgiri Four-ring Ypthima chenui, Palni Four-ring Ypthima ypthimoides, Palni Fritillary Argynnis castetsi, Nilgiri Tiger Parantica nilgiriensis and Striped Hedge Hopper Baracus subditus.  The proportion between the endemic and non-endemic species of butterflies in the different basecamps are given in Fig 2.  The basecamps such as Meenthotty, Rajamala, Anamudi and Eravikulam-Kolukkan recorded the greatest proportion of the endemic butterflies at ENP, while the Lakkam Kudi basecamp recorded the greatest proportion of the non-endemic species of butterflies.  While the basecamps that recorded the greatest proportion of endemic butterflies were all within the core zone of the ENP, the Lakkam Kudi basecamp is very close to human habitation and the elevation is also the lowest.  The Palni Four-ring found to be the most abundant species among endemic species was found in ENP. 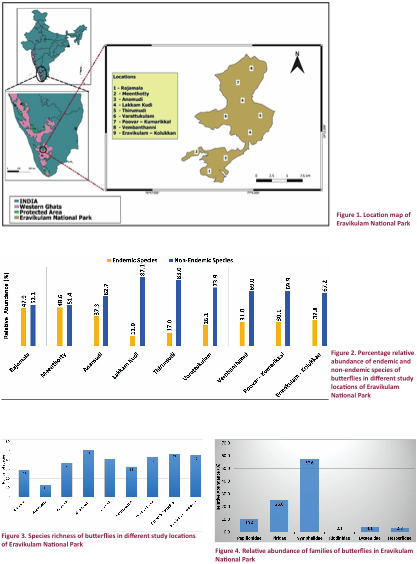 Larsen, T.B. (1988). The butterflies of the Nilgiri mountains of the southern India (Lepidoptera: Rhopalocera). Journal of the Bombay Natural History Society 85(1): 26–43.