Copyright: © Kar et al. 2018. Creative Commons Attribution 4.0 International License. JoTT allows unrestricted use of this article in any medium, reproduction and distribution by providing adequate credit to the authors and the source of publication.

Acknowledgements: The study was carried out with the financial support from the Odisha Forest Department.  The authors would like to thank the Divisional Forest Officer for his support during the study.  Sanjay K. Dalai and Hemanta K. Dalai of Mundali Village are highly acknowledged for their support during the monitoring activities.

The Black-bellied Tern Sterna acuticauda J.E. Gray, 1831 (Image 1) is one of the 23 species of terns occurring in the Indian subcontinent (Ali & Ripley 1983) and is categorized as Endangered in the IUCN Red List of Threatened Species (BirdLife International 2017).  It is native to Bangladesh, Cambodia, India, Laos, Myanmar, Nepal, Pakistan, Thailand, and Vietnam and also occurs in some parts of southern China with an estimated global population of 6,700–17,000 mature individuals (BirdLife International 2017).  The Black-bellied Tern inhabits large rivers and marshes and prefers to breed in isolated sandy islands in large rivers, which are often under deterioration from rapid and ongoing threats like Industrial pollution, dam construction, extraction of sand and gravel, over-harvesting of wetland products, and human disturbances (Sykes 2010; Rahmani 2012; BirdLife International 2017).  Besides that, the collection of its eggs for food, destruction of its nests from flooding, and predation of eggs and chicks by stray animals have direct impacts on the breeding success of the bird (Goes et al. 2010; Rahmani & Nair 2012; BirdLife International 2017).  As a result, Black-bellied Terns are becoming rarer and their population is declining worldwide (Li et al. 2009; Mundkur et al. 2017); it is presumed to be locally extinct in Cambodia, China, Laos, Thailand, and Vietnam (Goes et al. 2010; Sykes 2010; BirdLife International 2017).  The recently compiled Asian Waterbird Census Report (Mundkur et al. 2017) recorded only 72 individual birds (57 from India, seven from Myanmar, and eight from Nepal) in 2015.  Therefore, documentation and protection of the breeding sites of this globally threatened species deserve high priority for its long-term conservation.

In February 2018, while surveying for the Indian Skimmer Rynchops albicollis Swainson, 1838 along the Mahanadi River (Fig. 1), we regularly sighted Black-bellied Terns in breeding plumage from different localities (Image 1) and predicted possible breeding activities.  The number of individual birds recorded from different localities during the study period is given in Table 1.  During 23–27 February 2018, we also recorded seven simple scrape nests having one to three greyish eggs with dark brown spots in each nest from three temporary sandy islands along the Mahanadi River (Image 2).  These sites were Mundali (20.4340N & 85.7340E), Kakhadi (20.4900N & 85.7710E) situated around 8km north of Mundali along the downstream, and Jatamundia (20.4170N & 85.5850E), situated around 18km west of Mundali along the upstream  (Fig. 1).  For confirmation of the nests, we later monitored them on a boat from a safe distance using a pair of binoculars and observed the Black-bellied Terns incubating the eggs (Image 3).  Earlier, Black-bellied Tern was known to breed in Kaziranga National Park in Assam (Barua & Sharma 1999), Bharathapuzha in Kerala (Neelakantan et al. 1993; Eldos et al. 2002), Hidkal Dam in Karnataka (Rahmani 2012), and Chilika Lake and the Mahanadi River in Odisha (Rahmani & Nair 2012) in India.  The breeding habitat and nesting season of Black-bellied Tern observed in this study resemble its general behaviour throughout its distribution range (Rahmani 2012; BirdLife International 2017).  Our informal discussions with the local fishermen revealed that all these islands appear only during summer and confirmed that the Black-bellied Terns regularly use these sites for nesting.  We found that the clutch size of the nests varied from a single egg to three eggs, indicating that the nesting and egg laying activities may continue further. 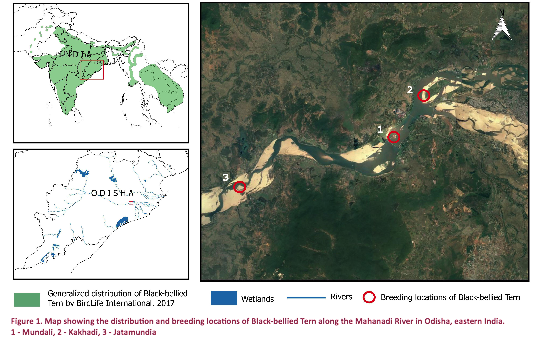 As the population of Black-bellied Tern is declining rapidly throughout its  range (Li et al. 2009; Mundkur et al. 2017), protection of the breeding sites should be given priority for the breeding success and survival of this bird.  These sites were also documented as breeding sites for the Vulnerable Indian Skimmer (Debata et al. 2017).  Therefore, these sites can be ideal for the conservation of these globally threatened species with adequate management interventions.  Unfortunately, all these nesting sites are situated within high anthropogenic zones outside protected areas.  The communities residing in nearby areas are primarily fishermen who rely on the river for year-round fishing activities.  Sand mining is also a regular activity along the riverbed near the nesting sites during the summer season (Image 3).  Apart from that, the nesting islands are also prone to flooding due to improper management of check gates at the barrage, which imposes a direct threat on the survival of the nests (Images 4a,b).

For the protection of the nesting sites and long-term conservation of the Black-bellied Tern, regular community awareness activities should be carried out to seek local support to minimize disturbances in the area during the breeding season.  Coordination with the water resource department and the revenue department will be helpful in managing the water level and controlling sand mining activities, respectively, during the breeding season.  Apart from that, in agreement with the recommendation given by Rahmani (2012), Rahmani & Nair (2012), and BirdLife International (2017), further targeted surveys, particularly during the breeding season, along the entire length of the Mahanadi River and other large rivers are essential to understanding the status of the Black-bellied Tern in Odisha.  The results of these will be helpful in reassessing the global status of the species and formulating conservation plans for the future.

Table 1. Number of individual Black-bellied Terns, nests, and eggs recorded during 5–27 February 2018 from different localities along the Mahanadi River in Odisha, eastern India 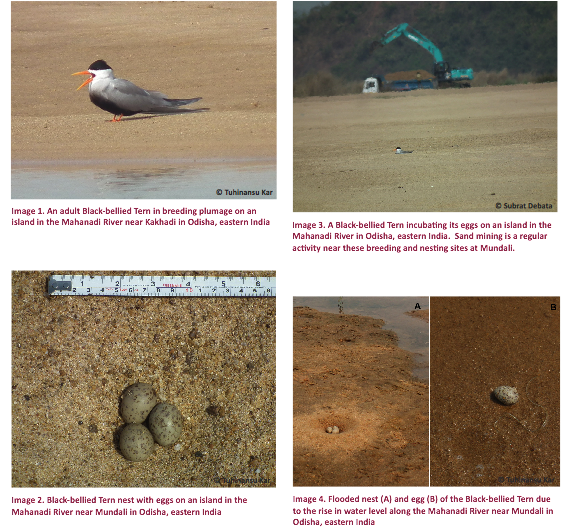