Copyright: © Kamalakannan et al.  2018. Creative Commons Attribution 4.0 International License. JoTT allows unrestricted use of this article in any medium, reproduction and distribution by providing adequate credit to the authors and the source of publication.

H. durgadasi (Image 1a) is a medium-sized bat (FA= 34.45–37.50), belonging to bicolor-species group of the family Hipposideridae and it roosts in small colonies of several (> 100) individuals (Khajuria 1980).  The roosts are found in the artificial caves in hillocks and under huge granite boulders (Bates & Harrison 1997).  In Karnataka, this species has been observed to be sharing its roost with H. fulvus, H. hypophyllus, H. speoris, and Rhinopoma hardwickii (Kaur et al. 2014), while in Madhya Pradesh, it occurs in association with H. fulvus and sometimes with Rhinolophus lepidus, Taphozous melanopogon, and T. theobaldi (Khajuria 1980).  The species forages in tropical dry deciduous and thorn forests.  So far, this species has been recorded only from two states, including its type locality in Katanga Village, Jabalpur District, Madhya Pradesh in central India (Khajuria 1970) and Kolar District, Karnataka in southern India (Kaur et al. 2014).  It has been found at elevations from 347m to 900m. 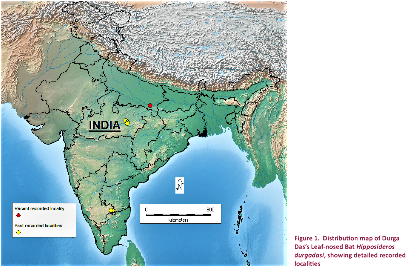 External measurements (both morphological and cranio-dental; Table 1 & 2) were taken using digital Vernier calliper (Mitutoyo) to the nearest 0.01mm.  The photomicrographs of the baculum were captured using an optical light microscope (LEICA M205 A; Image 1d).  Photographs of the skull of one of the specimens were taken from all aspects (Image 2a–f).  Upon careful examination of the external morphology and cranio-dental characters of all specimens and bacular structure of the male specimens (Khajuria 1970; Topál 1975; Khajuria 1980; Bates & Harrison 1997; Srinivasulu et al. 2010; Kaur et al. 2014), they were identified as Durga Das’s Leaf-nosed Bat Hipposideros durgadasi Khajuria, 1970.

Diagnostic characteristics: Fur is soft, brown to reddish-brown on the dorsal surface (Image 1e), whitish on the ventral surface (Image 1a).  Supplementary leaflets are absent.  The anterior leaf has a median emargination and is covered throughout with short, stiff black hair.  The internarial septum is well-developed, with a short base and a bulbous apex (Image 1b).  Nostrils are oval in shape and possess narial lappets on the outer margin.  Compared to H. cineraceus, forearm length is longer and ears are shorter; the tail projects further beyond the interfemoral membrane (> 1mm; Image 1c), unlike H. cineraecus, where it is less than 1mm (Table 1 & 3).  The cranio-dental (Table 2) measurements such as condylobasal length (CBL): 13.0–13.9 mm; condylo-canine length (CCL): 12.65–12.78 also distinguish this species from other leaf-nosed bats of bicolor-species group, namely, H. ater, H. fulvus, and H. cineraceus (Table 2 & 3).  The baculum is small (1.3mm) with semi-circular (‘C’) shape.  The base of baculum is rounded, wider, and the tip is pointed (Image 1d).

The morphological and cranio-dental measurements of these voucher specimens were also compared with that of other species of bicolor-species group (Table 3).  The presence of a well-developed internarial septum of peculiar shape (with a short base and a bulbous apex), tail projecting beyond the interfemoral membrane (>1mm), and the conspicuous semi-circular shape (‘C’ shape) of the baculum are some of the characters attributed to H. durgadasi which render this species distinct from its sister species.

When this species was first reported from its type locality (Katanga Village in Jabalpur District of Madhya Pradesh), it was considered as a subspecies of Hipposideros cineraceus Blyth, 1853 (Khajuria, 1970).  Later, Topál (1975) distinguished this species as Hipposideros durgadasi based on its distinct baculum structure.  Further, this species was also known to be present in the villages of Katangi, Richhai and Gwarighat in Jabalpur district of Madhya Pradesh (Topál 1975; Khajuria 1980) and recently from Hanumanhalli and Therhalli villages of Kolar District in Karnataka (Kaur et al. 2014; Fig 1).  The specimens of H. durgadasi collected from Mirzapur District in Uttar Pradesh were identified correctly as H. durgadasi (Image 1e) but were not reported or published in any of the subsequent communications.  This might be due to lack of knowledge on taxonomy of bats at the time of collection.  Through this communication, we report and confirm the presence of H. durgadasi from Uttar Pradesh for the first time.  This also extends the distribution of this species further north in peninsular India by 400km from the type locality.

The Durga Das’s Leaf-nosed Bat is a rare species in India and it has been classified as ‘Vulnerable’ by the IUCN Red List of Threatened Species (Mishra & Dookia 2016).  Anthropogenic activities like stone quarrying near roosting sites of the species is causing habitat loss, which is the major threat to this species (Kaur et al. 2014).  Habitat protection and public awareness would help in mitigating further threats to this species (Molur et al. 2002; Mishra & Dookia 2016).  Further studies on the taxonomy, ecology and the range extension of the species throughout the country will help in understating the present status of this species. 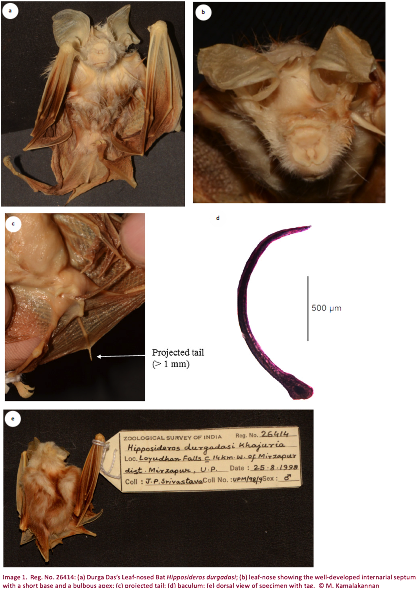 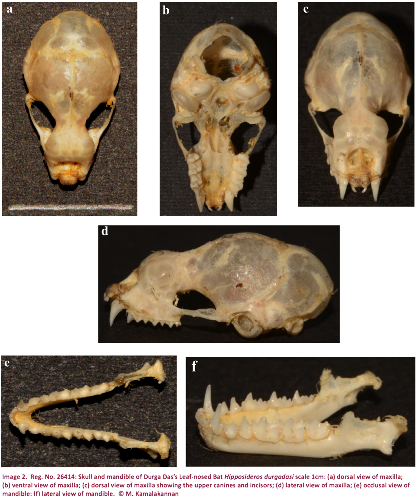