Copyright: © Rathod & Parasharya 2018. Creative Commons Attribution 4.0 International License. JoTT allows unrestricted use of this article in any medium, reproduction and distribution by providing adequate credit to the authors and the source of publication.

Acknowledgements: We are thankful to Dr. S.S. Talmale, Zoological Survey of India for the assistance in identification of odonates.  We also thank Gujarat Biodiversity Board and State Forest Department for the permission to carry out research on Odonata in the state and collect specimens (if needed) in the protected areas.  One of us (DR) is grateful to University Grants Commission, New Delhi for awarding Rajiv Gandhi National Fellowship for pursuing Ph.D. programme (2014-2017).

Abstract: Odonate diversity of Nalsarovar Bird Sanctuary, a Ramsar site in Gujarat, was studied between January 2015 and July 2017.  A total of 46 species belonging to two suborders, six families, and 27 genera were recorded, which included 14 species of Zygoptera (damselfly) and 32 species of Anisoptera (dragonfly).  Out of the 46 species, 40 species are new records for the Nalsarovar Bird Sanctuary.  The record of Enallagma cyathigerum Charpentier, 1840 in Gujarat needs verification.  Need to monitor changes taking place in Odonata species composition after influx from Narmada canal at Nalsarovar is emphasized.

Most of the Ramsar sites in India are recognized either because they are representative natural wetlands (Group A, Criterion 1) (Islam & Rahmani 2008) or based on information available on avian diversity and their abundance (Group B, Criterion 5 to 9) (Islam & Rahmani 2008).  Besides birds (Ramakrishna et al. 2006; Kumar 2008, 2009), faunal studies of the Ramsar sites of India are largely restricted to fishes (Sharma & Mehta 2008; Dua & Chander 2009; Saikia & Saikia 2011).  In India aquatic insect diversity is never used as criterion for recognition of Ramsar site.  Among the 26 Ramsar sites in India, odonate diversity of only three wetland sites are known (Palot & Soniya 2000; Kirti & Singh 2000; Singh et al. 2017).  The present study on the Odonata was aimed to generate a basic database of the aquatic fauna of Nalsarovar Bird Sanctuary.

Biodiversity status and list of important species dependent on candidate wetland is a prerequisite for declaring any wetland as ‘Ramsar site’ (Ramsar Regional Center - East Asia 2017).  Published literature on the fauna of NBS is either incomplete (GEER Report 1998) or erroneous (Kumar 2009); however, as no such published list of odonates is yet available (GEER Report 1998; Kumar 2009), this study was taken up to fill up the lacunae in our knowledge.

NBS consists primarily of a 120.82km2 area of the much larger natural low-lying area, and is situated about 64km to the west of Ahmedabad City, in the central part of Gujarat State, India (Fig. 1).  It is considered a freshwater ecosystem, which gets inundated during south-west monsoon (June to September); its water becomes saline during summer (March– May) due to evaporation (GEER Report 1998).  NBS is located at 22.817900N and 72.045300E, and it receives water from two rivers: Brahmini and Bhogavo (Singh 2001).  It is a natural lake, originated by the elevation of the land between present-day Gulf of Khambhat and Gulf of Kachchh during the late quaternary period, thereby breaking the connection between the two gulfs.  The area of Nalsarovar has remained a shallow depression with water depth ranging between 1.5–2.0 m as the land did not rise up to the height of mainland Gujarat or Saurashtra (Prasad et al. 1997).

The lake has around 300 small and big islands.  The basin of the lake is elongated and nearly elliptical with gentle sloping margins.  All around the basin, there is sandy to clayey shoreline.  The water temperature rises up to 350C during the month of May and falls below 150C in January.  The average rainfall is about 580mm (Kumar et al. 2006).

It is the largest wetland bird sanctuary in Gujarat, and one of the largest in India.  About 48 species of phytoplanktons and 71 species of flowering plants, including 30 species of aquatic macrophytes, are recorded in this natural lake (Kumar et al. 2006).  For establishing Narmada Canal network in Saurashtra, a site known as Bhaskarpura was created as storage reservoir of Narmada Canal water (GEER Report 1998).  Narmada canal water started flowing in 2003, and since then the canal water is percolating to the Nalsarovar via Vadala depression (Fig. 1).

This study was carried out between January 2015 and July 2017 in post monsoon period.  Odonates were closely observed at the shallow edge of the wetland with naked eyes and occasionally using 7X35 binoculars.  We also surveyed the marshy area of the adjoining villages and the small island areas within the lake (Images 10 & 11).  Voucher specimens of some species were collected using insect collecting net.  The specimens were either preserved in 70% alcohol or kept in envelopes, labeled with details of the collection.  Odonates were counted using point count method (Small-shire & Beynon 2010; Rohmare et al. 2016) on the peripheral area of the sanctuary.  Occurrence status was worked out on the basis of the frequency of occurrence as follows: >50%- common, 25-50%- Uncommon, 5-25%- Rare and <5%- very rare. 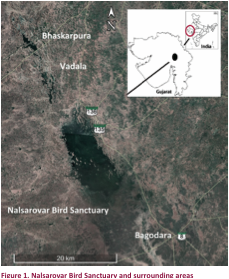 A total of 46 species belonging to two suborders and 27 genera under six families were recorded in and around NBS.  Fourteen species of Zygoptera (damselfly) and 32 species of Anisoptera (dragonfly) were recorded.  In this study, both Zygoptera and Anisoptera were represented by three families each (Table 1; Images 1–9) .

At Nalsarovar, the most dominant families were Libellulidae with 26 species and Coenagrionidae with 10 species, respectively.  Remaining families had two or three members each (Table 1).   On 27 September 2016, most visible dragonflies were Anax ephippiger, Potamarcha congener, and Tramea basilaris, and they were abundant too.

Indothemis carnatica Fabricius, 1798 is listed as Near Threatened species in the Red List (IUCN 2017).  Though not abundant at any site, it occurs in marshy areas with reeds within the sanctuary as well as in the surrounding areas.  Lestes umbrinus Selys, 1891 and Elattoneura nigerrima Laidlaw, 1917 are Data Deficient species and their encounter was very low.  Forty-two species of odonates from the present study are listed under Least Concern species.  Status of Paracercion malayanum Selys, 1876 is not available on the IUCN Red List.  Hence, current records may help to undertake threat analysis.

Table 1. List of Odonata of Nalsarovar Bird Sanctuary of Gujarat 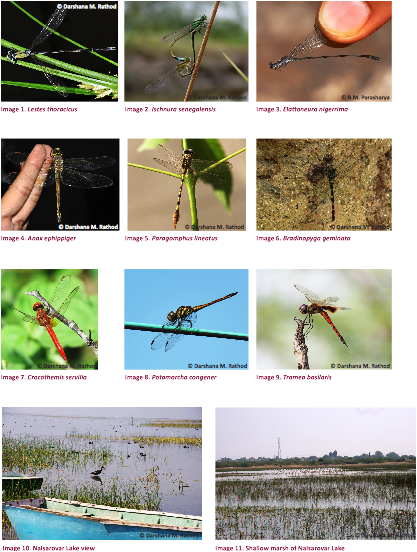 Prasad (2004) reported seven species from the Nalsarovar during a general faunal survey of Gujarat State by the Zoological Survey of India.  In the present study, 46 species of odonates were recorded.  Hence, 40 species are additions to the list of Odonata of NBS.  Enallagma cyathigerum Charpentier, 1840 recorded by Prasad (2004) was not encountered in the present study.  In Gujarat, Enallagma cyathigerum Charpentier, 1840 was reported from Anandpura Village (Mandal Tahsil) and Nalsarovar of Ahmedabad District by Prasad (2004).  This species is widely distributed in Europe and Northern Asia with only two records from India.  In India, this species has been recorded from Kashmir and West Bengal (Fraser 1933; Srivastava & Sinha 1993).  Rohmare et al. (2015, 2016) had reported the species from central Gujarat, however, it was considered a misidentification (Rathod 2017).  Rathod (2017) had not encountered this species anywhere in Gujarat State.

The Odonata diversity of Thol Bird Sanctuary (Mokaria 2015) and Pariej wetland (Rathod et al. 2015) of Gujarat have been reported recently.  Both the wetlands are located in central Gujarat within the direct distance of 55km (Thol Bird Sanctuary) and 65km (Pariej Wetland) from Nalsarovar and is fed by Narmada canal waters. Their reported species diversity was only 15 (Thol) and 29 (Pariej).  The differences in reported numbers of species might be attributed to the structural differences and area of the wetland, and the relative efforts made by the researchers.  In India, the faunal study of Odonata is done only on three Ramsar sites.  The present study on Nalsarovar is fourth one.  Comparison of the diversity of Odonata with other Ramsar sites across the country may not be meaningful as several factors such as biogeographic zones, the intensity of study, and period influence the reported diversity.  However, a comparison with Keoladeo National Park would be worth as it is located in the adjoining state (Rajasthan) and in the same biogeographic zone (semi-arid zone).

Only 37 species of Odonata have been reported from Keoladeo National Park till date.  Interestingly, 32 species are shared between two Nalsarovar and Keoladeo; five species, namely, Enallagma parvum Selys, 1876, Pseudagrion spencei Fraser, 1922, Anaciaeschna jaspidea Burmeister, 1839, Anax imperator Leach, 1815, and Palpopleura sexmaculata Fabricius, 1787 were recorded from Keoladeo National Park but not from NBS.  Except for Anax imperator Leach, 1815 and Palpopleura sexmaculata Fabricius, 1787, the remaining three species are reported from other parts of Gujarat (Rathod 2017).

Odonates are indicators of wetland health (Balaraman 2008; Subramanian et al. 2008; Dholu 2015).  Long-term ecological studies of such Indicators of the ecosystem should be undertaken for wetland monitoring and conservation.  This study was done after the implementation of Narmada Canal, and it is unfortunate that no information about the odonate fauna of Nalsarovar before implementation of Narmada canal project is available.  Nalsarovar is rich in macrophytes with at least 30 species (GEER Report 1998), and when the water permanency of Nalsarovar increases with the percolation from Narmada canal, the aquatic vegetation is likely to flourish.  In such a situation, the impact on Odonata species at NBS needs to be monitored.