Copyright: © Geethakumary et al. 2018. Creative Commons Attribution 4.0 International License. JoTT allows unrestricted use of this article in any medium, reproduction and distribution by providing adequate credit to the authors and the source of publication.

Acknowledgements: The authors are grateful to the curators of Leiden (L) and Arnold (A) herbarium for providing access to images of the species, the Kerala Forest Department for giving permission and logistic support to conduct field studies and the Kerala State Council for Science and Technology for financial assistance through JNTBGRI Plan Grants.  The second author acknowledges DST-SERB, Government of India for the financial assistance.

The genus Cinnamomum Schaeffer includes an old-world group, predominantly distributed in subtropical to tropical Asia, plus a few species in Australia and the western Pacific area, as well as a New World group in Central and South America (Rohde et al. 2017).  Rohwer (1993) estimated the total number of species to c. 350, of which 52 New World species have been recently transferred to Aiouea Aubl. (Rohde et al. 2017).  In India, this genus is represented by 49 species of which 26 occur in the Western Ghats (Geethakumary et al. 2017).  During our botanical explorations in the Western Ghats, we collected an interesting specimen of Cinnamomum from Idukki District of Kerala.  A detailed study of the relevant literature confirmed its identity as Cinnamomum goaense Kosterm., described by Kostermans (1985) based on the collections of Fernandes and Stocks.  From a thorough literature survey and herbarium consultation, it became apparent that this taxon had not been collected since 1950.  Hence our discovery is a recollection of this species after a lapse of 57 years.  In the collection by Fernandez (A00041271!, L0035798!)  the locality is given as ‘towards old Gund village, E of Goa Border’, and the collection of Stocks is from Canara (L0309076!).  Both these places refer not to point localities, but to geographically extensive political areas of the late colonial period, which belongs to “North Kanara” District, representing localities in Uttara Kannada, Karnataka State.  Interestingly, the collection of Fernandez is around 100 years after the collection of Stocks as is evident from the fact that the collections of Stocks from this region were mainly during the 1840s (probably during 1847).  The present collection forms a new record for Kerala and an extension in the distribution of this species to the southern Western Ghats after the Palghat gap, which is of phytogeographic significance.

A detailed description and other relevant information are provided based on recent collections.  The conservation status of this species is also assessed in light of the present collection.

Flowering and fruiting are probably from March to September.

The species is presently known only from Uttara Kannada, Karnataka and Idukki, Kerala (Fig. 2).  The population size of this species at Thodupuzha, Idukki is small with very few reproductively mature individuals.  Apart from this, based on herbarium information a population is present at Uttara Kannada District, Karnataka.  Even though there are no recent collections from this locality, we cannot rule out the probability of finding it there.  There are less than 25 mature individuals in the subpopulation at Thodupuzha, but we are not sure about the number of mature individuals or the quality of the habitat at Uttara Kannada.  Due to its limited distribution knowledge from several botanical studies in the Western Ghats, we assume it is highly restricted and found in a few severely fragmented locations with a plausible threat that could impact the status of the species.  We recommend immediate surveys in the type locality to determine its conservation status. 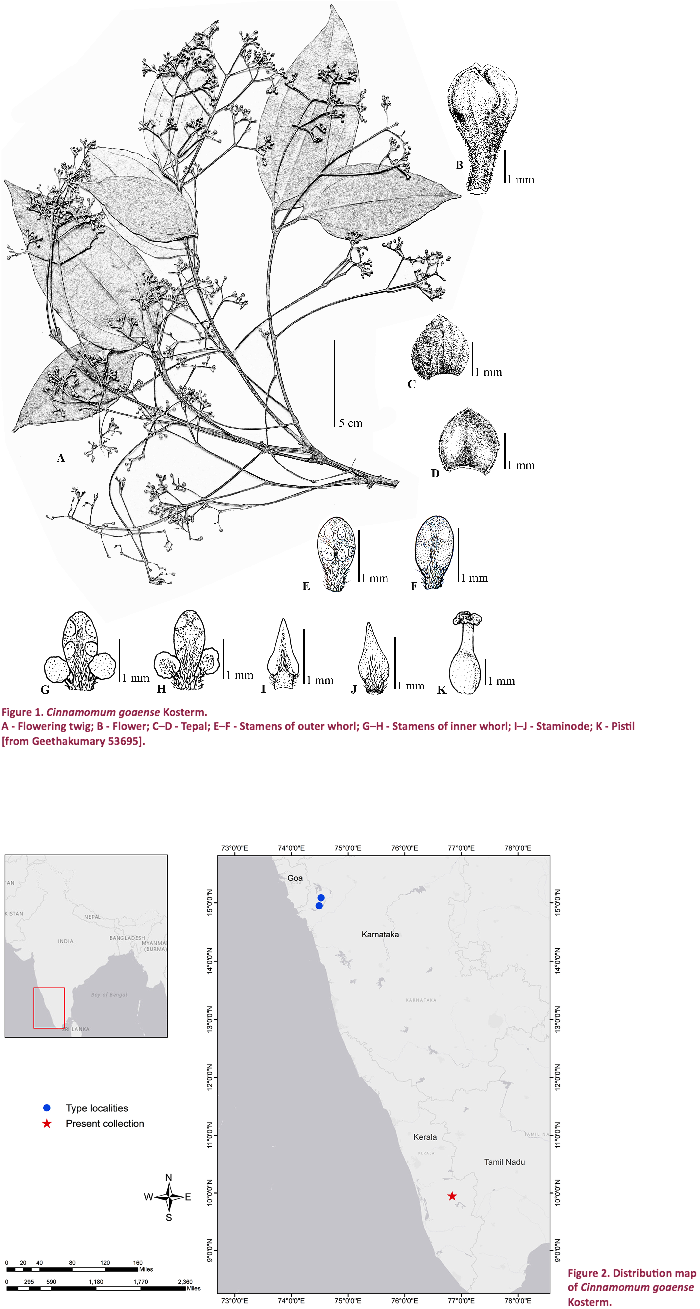