Anemone trullifolia and Berberis angulosa as new records to the flora of the western Himalaya, India

Copyright: © Rai et al. 2018. Creative Commons Attribution 4.0 International License. JoTT allows unrestricted use of this article in any medium, reproduction and distribution by providing adequate credit to the authors and the source of publication.

Acknowledgements: The authors are grateful to the Director and Dean, Wildlife Institute of India for institutional support.

The Himalaya, one of the global biodiversity hotspots, represents ~10,000 plant species, of which 71 genera and ~3,160 species are endemic to this region.  The elevation gradient of mountains in the Himalaya is the highest on earth, resulting in a great diversity of ecosystems that range from the warm subtropical climate to the perpetual snow peaks.  The Indian Himalayan Region (IHR) represents about 61% of endemic species and 49% of endemic genera of flowering plants (Nayar 1996).  Several authors recognized the western Himalaya as an important floristic region of India (Hooker 1907; Chatterjee 1939).  Floristically, compared to the eastern Himalaya, the western Himalaya is more explored; however, several pockets in the interior valleys still require intensive botanical surveys.  Interestingly, reports of several noteworthy species are still being brought out from this region and many new species have been described in the recent past (Tiwari & Adhikari 2011; Rai et al. 2014, 2015, 2017; Rai & Rawat 2015) indicating a further need of intensive floristic explorations in this region.

Extensive floristic surveys were conducted in the high altitudes of the western Himalaya during the last two decades. The surveys were made in the entire western Himalaya covering Uttarakhand, Himachal Pradesh and Jammu and Kashmir.  Random sampling method is used covering various vegetation types and landform units viz., moist and dry alpine meadows, marsh meadows, alpine steppes, scree slopes, moraines etc.  Samples of the interesting species were collected, dried and herbarium specimens were prepared and housed at herbarium of Wildlife Institute of India (WII).  During these floristic surveys, we recorded A. trullifolia (Ranunculaceae) and Berberis angulosa (Berberidaceae), which are hitherto undescribed from the western Himalaya (Fig. 1).  After a detailed scrutiny of the literature and regional flora (Hooker & Thomson 1855; Hooker 1975–97; Press et al. 2000; Uniyal et al. 2007; Adhikari 2010), taxonomic notes and searches in various herbaria (BSD, DD and WII), these species were identified as additions to the flora of the western Himalaya.  In this article, we present a brief description of each recorded species along with a photo-plate for easy identification, their distribution, ecology and phytogeography in the Himalayan region. 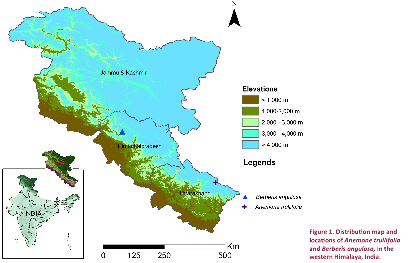 Ecology and phytogeography: The species grows alongside streams and moist alpine meadows between 3,500–4,700 m elevation.  It was recorded on dry and stable, undulating slopes having fine murram.  Higher slopes have large hemispheric cushions of Thylacospermum caespitosum.  These slopes harbour about 25–30 % herbaceous and 15–20 % graminoids with a dominance of Arenaria spp.  The only shrub in the area was Potentilla rigida.  The herbaceous species found in association with Potentilla bifurca, Waldheimia tomentosa, Leontopodium alpinum, Oxytropis lapponica, Arenaria bryophylla, Chesneya nubigena and Rheum moorcroftianum.  Overall vegetation cover in the region ranges between 25–70 %.  The area has scattered colonies of Himalayan Marmot Marmota himalayana.  The earlier known distribution range of this plant species is Nepal, Bhutan and SW Gansu, S Qinghai, S Sichuan, S Xizang and NW Yunnan regions of China (www.efloras.org). 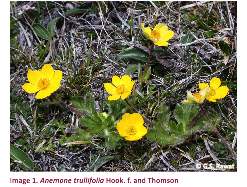 Ecology and phytogeography: The species grows in dry open slopes, open canopy forests and meadows between an elevation of 3,000–4,500 m.  The earlier recorded western most distribution of the species was in the Myagdi area of Nepal (Adhikari 2010) which is about four degree below in latitude from the current location.  In China it is reported from Qinghai, Xizang regions (www.efloras.org). 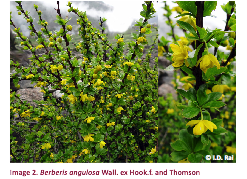 The western Himalaya have received attention of a large number of botanists yet they remain rather under explored.  The wide variation in altitude and climate makes it ideal for sustaining a rich diversity of plant and animal species.  Previously in the Indian Himalayan region Anemone trullifolia and Berberis angulosa were known to occur only in the eastern and central Himalaya.  Current reports from the western Himalaya make them bio-geographically noteworthy by means of their distribution in the Himalaya.  These species in this region could be attributed to their extended range of distribution or restrained botanical excursions in these interior valleys.  Further, the current report on the presence of a few individuals indicates their rarity in the region. 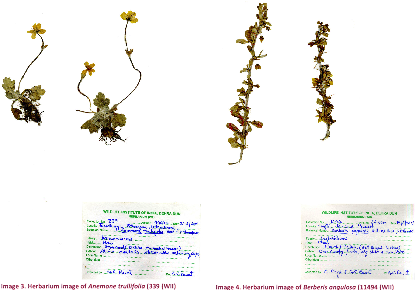 Adhikari, B. (2010). Systematics and Phylogeographic studies of