A record after 52 years, and additional description of the emesine assassin bug Emesopsis nubila (Hemiptera: Reduviidae: Emesinae) from western India

Copyright: © Sarode et al. 2018. Creative Commons Attribution 4.0 International License. JoTT allows unrestricted use of this article in any medium, reproduction and distribution by providing adequate credit to the authors and the source of publication.

Acknowledgements: We are grateful to Dr. David Redei (Nankai University, China) for constant help and encouragement.  We also thank Dr. Tadashi Ishikawa (Tokyo University of Agriculture) for literature and other help.  We are indebted to the reviewer for critical comments that have helped to shorten and improve the contents of this note.  We thank Mr. Mihir Joshi for collection of the female bug from the Katraj area of Pune city. Finally, we are grateful to the authorities of Modern College for the facilities and support.

A small, 5mm long, hairy female bug with long legs, till date not recognized by the authors, was collected near a source of light in Katraj area of Pune City, Maharashtra, the western part of India.  Subsequently, a similar male specimen was collected in Shirur, near Pune, in a grassy patch.  One dead male was also found trapped in a spider’s web at Daund, near Pune.  All the three specimens were identified using keys in Wygodzinsky (1966) as Emesopsis nubila Uhler, 1893, which is an emesine assassin bug species belonging to the tribe Ploiariolini and is widely distributed in tropical and subtropical zones all around the world.  These specimens represent the first record of E. nubila from Maharashtra State as well as western part of India. An earlier record of this species (as Calphurnia reticulata) was from Calcutta (now Kolkata) (Distant 1910); the checklist of Reduviidae by Ambrose (2006) also states Kolkata as a locality based on Distant’s work and not on the basis of any fresh collections.  Thus, this finding is a rediscovery of this bug after a prolonged period and also extends the range of its distribution considerably westwards as far as India is concerned.  Although widespread, this bug has not been recorded from India in many years, except perhaps the record by Wygodzinsky (1966) of a specimen from Coimbatore, southern India.

In this note, we provide many images of the morphological characters of this species as we strongly support the idea of Ang et al. (2013) who state in the context of taxonomic papers, “We propose that descriptions should become more data-rich by presenting large amounts of images and illustrations to cover as much morphology as possible”.

Material examined: one female from Katraj, Pune (coll. M. Joshi; October 2016); one male from Shirur, Pune (coll. B. Sarode, June 2017); one male from Daund, Pune (coll. P. Pansare, November 2017).  Bugs were studied under a Leica stereozoom (MZ6) microscope and also photographed with an attached Canon Powershot S50 camera. Several images were stacked using Combine ZM software and the images were processed with Adobe Photoshop CS5.  Measurements were done with Erma stage and ocular micrometer and an accurate scale.  The pygophore was dissected after treating the last three abdominal segments with hot 10% KOH, the phallic complex was dissected and the parameres and phallus were separated and mounted in polyvinyl lactophenol (PVLP) with lignin pink dye, and photographed.  All specimens and slides of genitalia are preserved in Modern College of Arts, Science and Commerce, Shivajinagar, Pune.

Diagnosis: The diagnostic characters for E. nubila are, in brief: head and pronotum yellowish-brown with long erect setae, posterior pronotal lobe about twice as long as anterior pronotal lobe, mid and hind legs with long setae, forewing with typical markings, endosoma of male genitalia with a pair of vesica arms only, and vesica arm thickened in basal half and slender in apical half. 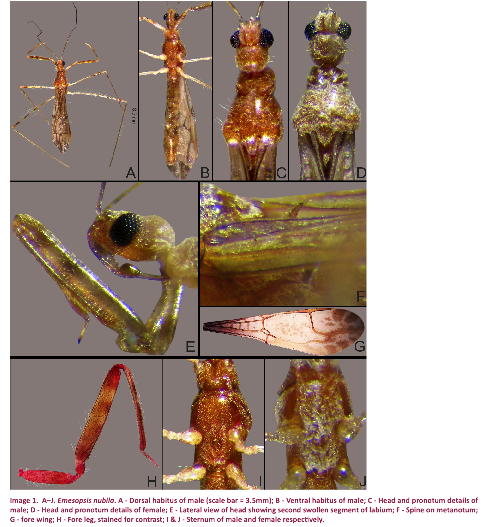 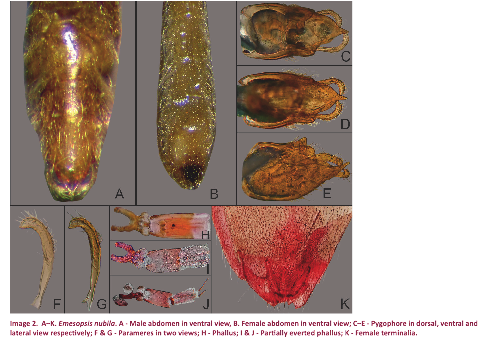 The above-mentioned characters match with those described by earlier workers.  To confirm the species further, we compared the images of pygophore and phallus with the figures given by Wygodzinsky (1966), Villiers (1979) and photos given by Ishikawa & Yasunaga (2004), as well as Ishikawa & Okajima (2006).

The checklist of the Indian species of Reduviidae (Ambrose 2006) includes E. nubila and another species, namely Emesopsis bimedia Ravichandran & Livingstone, 1989 from ‘Coimbatore, Tamil Nadu’.  This latter species has been never recorded again.  Wygodzinsky (1966) studied a specimen of E. nubila from Coimbatore and what has been described as E. bimedia may also be E. nubila.  From the description given by the authors (and one line drawing of dorsal habitus in unpublished thesis, Ravichandran 1988), it is difficult to compare E. bimedia and E. nubila; the authors state the difference to be the absence of setae on mid and hind legs and absence of piceous spot near antennae in E. bimedia (Ravichandran & Livingstone 1989).  Efforts to collect material in Coimbatore and comparison with actual type (if available) are essential to settle this problem.

We believe this to be the first photographically illustrated documentation and brief description of Emesopsis nubila found in India.  After Distant’s original description of Calphurnia reticulata Distant, 1909, currently a junior synonym of E. nubila, there is no subsequent record from India.  Lack of extensive surveys and lack of expertise in taxonomy of this subfamily in India are probably the main reasons for the poor state of our knowledge about Emesinae of India.

In a brief two-year survey of Emesinae near Pune, Maharashtra State, we have come across several such bugs which will be the subject of separate papers; Kulkarni & Ghate (2016a) have already reported the presence of Myiophanes greeni Distant (type locality Sri Lanka) from India for the first time.  Subsequently, a new emesine species, namely Bagauda ernstmyeri Kulkarni & Ghate, 2016 was also added to the Indian fauna (Kulkarni & Ghate 2016b).  This indicates that these small and delicate emesine bugs need more attention as we hardly know about their distribution in India.