Copyright: © Ganesh 2018. Creative Commons Attribution 4.0 International License. JoTT allows unrestricted use of this article in any medium, reproduction and distribution by providing adequate credit to the authors and the source of publication.

Acknowledgements: I thank the Executive Secretary, Chairman and Trustees of the Chennai Snake Park Trust for supporting my research activities. I thank Dr. T.S. Sridhar, Principal Secretary and Commissioner of Museums, Madras Govt. Museum, Egmore for permitting my museum research on material under their care. Fieldwork was organized and conducted as part of Recent Protected Area Biodiversity Inventory Programme instigated by the Tamil Nadu Forest Dept. Romulus Whitaker and Palni Hills Conservation Council (PHCC) are thanked for all their help and inputs. I am very grateful to Dr. K.A.Subramanian, Officer In Charge, ZSI Chennai for the photo voucher deposition.

Abstract: The description of Rurk’s Cat Skink Ristella rurkii is expanded herein based on recent field sightings and a voucher specimen.  Three individuals comprising an adult male, an adult female, and a juvenile were encountered in Kodaikanal, Palni Hills of the southern Western Ghats.  Morphological and ecological notes on the voucher specimen and these live sightings are elaborated to enrich the current knowledge on this little-known species.  This species is also illustrated in life herein for the first time.  The current report forms the rediscovery of this species after nearly 90 years and after a lapse of 175 years since its original description.  A review of its past distribution records is compiled and further surveys are recommended to revise the geographic range and conservation status of this Data Deficient species.

Skinks living in dense forests are hard to document due to their cryptic appearance and elusive habits.  The newly recognized skink family Ristellidae, consisting of the genera Ristella Gray, 1839 from the Western Ghats and Lankascincus Greer, 1991 from Sri Lanka, is the only skink family endemic to the Indian subcontinent (see Hedges 2014).  The genus Ristella is endemic to the Western Ghats of peninsular India and this group of small-sized, leaf-litter-dwelling skinks rank as one of the most poorly-studied lizards in India (Smith 1935).  The first of the species to be described in this genus is R. rurkii, the type species of the genus.  Gray (1839) described this species based on the syntypes BMNH 1946.8.15.64-68 in the Natural History Museum, London.  The original description reads thus “Ristella Rurkii (sic).  Crown and back pale brown, shining; scales 6-rowed, each of four central rows with a blackish central spot, forming four longitudinal series of spots; sides white-dotted; chin and belly white.  North India, Dr. Rurk. Mus. Chatham.”

Gray (1845) again included this species in his catalogue and stated it to be from northern India.  Jerdon (1854) did not record or include this species in his catalogue.  Günther (1864) did not include this genus or species in his book.  Theobald (1868) included this species in his catalogue and mentioned that it is from northern India.  Beddome (1870, 1871) and Stoliczka (1871) described further congeners and noted that these lizards occur in the Western Ghats rainforests, with a speculation about the provenance of the ‘North Indian’ R. rurkii.  Günther (1875) remarked that R.H. Beddome’s material from ‘Toracada Valley’ (now Thorakadavu near Aliyar in Anaimalai) fully agrees with R. rurkii.  Theobald (1876) remarked that the genus Ristella was restricted to the Western Ghats.  Boulenger (1887) categorically dissociated R. rurkii from northern India and mentioned its distribution as Anaimalai (also see Boulenger 1890).

In the 20th century, Roux (1928) collected R. rurkii from Palni Hills.  Smith (1935) compiled the then present information on this species and stated that its purported type locality ‘North India’ is incorrect, as it is endemic to the Western Ghats.  Further books on Indian lizards such as Daniel (2002) and Das (2002) could not shed light on this species (but see Sharma 2002).  Pyron et al. (2013), however, discussed the phylogeny of Squamata in general including the relationship of Ristella rurkii and Lankascincus fallax.  Even more basic information on this species, however, such as its morphology, distribution, and natural history still stands unknown.  Of late, current compilations on Indian lizards customarily list this species (e.g., Venugopal 2010; Aengals et al. 2018).  For a long time, the only published information adding extra information and reporting a subsequent collection of this species is that of Roux (1928).  Then Ganesh & Asokan (2010) reported on a preserved specimen in the collection of the Madras Government Museum in India.  My sighting of this little-known species during fieldwork and direct examination of a voucher specimen provide an opportunity to contribute this paper.  This article herein communicates its rediscovery, illustrate this taxon in life for the first time, and furnish natural history notes based on my field observations.

Field observations on live lizards as well as data from the voucher specimen form the basis of this work.  Morphological and morphometric details were scored from the preserved voucher specimen using standard vernier slide callipers (L.C. 0.5mm).  Magnifying hand lens (5X zoom) was used for scale counting.  I follow Smith (1935) for morphological terminology and definitions.  Individuals sighted in the field were examined alive in situ.  No animals were collected for preservation and deposition in a museum owing to survey rules and stipulations of the Tamil Nadu Forest Department.  During field surveys, live individuals sighted were examined long enough to establish unambiguous species-identification but were not examined to the extent of the preserved specimen.  To alleviate stress, fewer measurements were scored from live animals in situ, that too, only to the nearest mm.  Photographs of the subject and habitat were taken using high-resolution digital cameras (Canon Powershot SX130 IS).  Much of the scalation (except scale rows that were scored directly) and colouration notes of live animals were scored from such photographs, after bigger magnifications and zoom in a computer.  Such voucher photographs were numbered as ZSI/SRC/R/PV-2018 and were deposited in the Zoological Survey of India, Chennai, a national repository of the Government of India.  Some of these are also reproduced here in this article.  Geo-coordinates (in decimal degrees to two decimal places) and elevation (in meters above mean sea level) were sourced from Google Earth software.  Rodgers & Panwar (1988) was used for ecoregional classification and Champion & Seth (1968) was referred for habitat type classification.  Higher taxonomic nomenclature follows Hedges (2014).

Scalation: Midbody scale rows 26; scales smooth or with feeble traces of keels, glossy; vertebral and paravertebral series of scales hexagonal, imbricate; dorsal and ventral scales slightly larger than lateral scales on trunk; parietals larger than interparietal, in contact with each other beyond interparietal; prefrontals two, distinctly separate, not in contact with each other; frontonasal one, in contact with frontal; supralabials seven; infralabials seven to eight; supraoculars five; supranasals absent; nuchals absent; loreals two on each side of head; mid-dorsal scales between parietals and sacral scale 50; mid-ventral scales between mental and preanal scale 52; lower eyelid scaly; nasal scale pierced by nostril; fourth toe subdigitals 10; tympanum visibly larger than naris, but smaller than a lateral body scale; preanals two, not much larger than surrounding scales; subcaudals not much larger than other scales on tail.

Field observations: In January 2015, during herpetological surveys in the Palni Hills of the southern Western Ghats, this species was sighted in some localities in and around the Kodaikanal Wildlife Sanctuary.  From 60 man hours of survey, a total of three sightings of this species were obtained.  A juvenile was sighted within dense grass clumps on open hill slopes at 16:35hr in Mannavanaur (10.220N & 77.360E; 1,900m).  One adult female was sighted under a fallen log at 12:25hr in Mathikettan Shola (10.180N & 77.420E; 2,050m).  An adult male was sighted at 14:20hrs under a rock in Berijam (10.180N & 77.390E; 2,100m).  Two near-term eggs were visible when seen through the venter of the female.  Sightings of gravid females and hatchlings indicate that January falls within the breeding season of Ristella rurkii, at least in the Palni hills region (Image 3).

In a broader sense knowledge on the genus Ristella itself is rather scanty (see Boulenger 1887, 1890; Smith 1935; Venugopal 2010).  While R. rurkii Gray, 1839 is the first congener to be described (in fact, the type species of this genus), other congeners were described between 1870 and 1887, largely based on materials collected by R.H. Beddome from various parts of southern Western Ghats (Boulenger 1890; Smith 1935).  Even in the original description of taxa such as R. travancorica (Beddome, 1870) the type series is reported to be composed of many specimens from localities as far afield as Travancore, Wayanad, and Anaimalais.  Same holds true for R. beddomii Boulenger, 1887 and R. guentheri Boulenger, 1887 for which the locations were broadly given as southwestern India (see Boulenger 1887).  Precise locations when mentioned, such as Sirumalai for R. guentheri, were later on postulated to be incorrect (see Ganesh & Arumugam 2016).  Thus, a broad taxonomic revision of Ristella spp. is direly needed.  Related congener Lankascincus Greer, 1991 of Sri Lanka was also found to contain greater diversity than initially realised (see Batuwita & Pethiyagoda 2007 and references therein).

Ristella rurkii has remained one of the most poorly known lizards in the entire Indian peninsula (Smith 1935; Venugopal 2010).  Since R. rurkii is the senior most congener nomenclaturally, and has been first associated and later dissociated from another nomen, R. travancorica (Beddome, 1870), I believe the taxonomic stability of R. rurkii is not questionable.  Its morphological uniqueness in being the only smooth-scaled Ristella (see Boulenger 1890; Roux 1928; Smith 1935) also sets it apart from other more cryptic congeners.  Other more recently described lizards from the Western Ghats such as Eutropis gansi Das, 1991 and Calotes aurantolabium Krishnan, 2008 are also equally unknown (Venugopal 2010).  Despite being long-known from as early as 1839, however, R. rurkii has remained obscure to science for as long as 175 years.  The mishap with its type locality (Gray 1839; Smith 1935) perhaps evaded or disoriented subsequent attempts of finding this species.  The sole published information reporting a subsequent collection was that of Roux (1928), who reported collecting four examples of this species, two each from Kukkal and Poomparai in Kodaikanal during March and June 1927.  There is still a whopping 90 years, nearly a century-long gap between the last previous report of this species (Roux 1928) and the current rediscovery.  The present examination (also see Ganesh & Asokan 2010) of this unique smooth-scaled congener stemming from a previously known, verified locality (Roux 1928), clearly backs up the veracity of this finding.

Till now, this species has been regarded as Data Deficient (Srinivasulu et al. 2014).  As far as current knowledge goes, it is recommended that further targeted surveys should continue to discover more populations of this species.  Historical reports (Smith 1935) from Travancore need a recent verification/ validation.  Surveys in Travancore Hills (see Annandale 1906; Inger et al. 1984; Ishwar et al. 2001; Chandramouli & Ganesh 2010) either recorded other congeners or did not identify their findings of Ristella spp. up to species level.  The nearby and contiguous High Wavys and Cardamom Hills harbour a very similar lizard assemblage as of Anaiamlai-Palni massif, including  endemics such as Salea anamallayana (Beddome, 1878) (Srinivas et al. 2008).  Ristella populations from these massifs only reveal the presence of R. guentheri Boulenger, 1887 (Chandramouli & Ganesh 2010).  Therefore, pending further reliable reports, R. rurkii should currently be considered as endemic to the Anaiamlai-Palni hill complex.  This has got a direct bearing on its conservation status and, therefore, further refinement of its threat status evaluation is recommended. 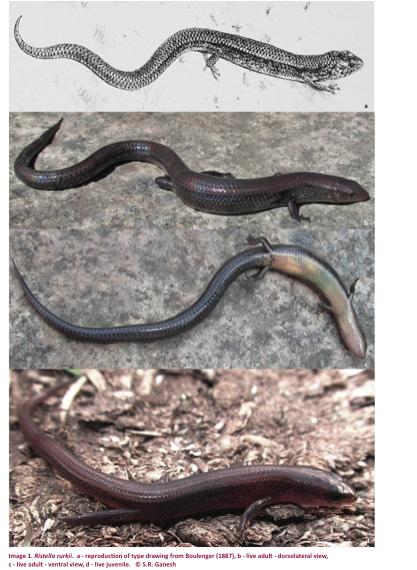 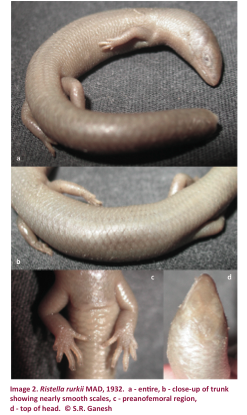 Gray, J.E. (1845). Catalogue of the specimens of lizards in the collection of the British Museum. London (Edward Newman), xxviii+289pp.

Günther, A. (1875). Second report on collections of Indian Reptilia obtained by the British Museum. Proceedings of the Zoological Society London 1875: 224–234.