Copyright: © Khadakkar et al. 2018. Creative Commons Attribution 4.0 International License. JoTT allows unrestricted use of this article in any medium, reproduction and distribution by providing adequate credit to the authors and the source of publication.

Abstract: Immature stages of Scaptodera rhadamistus (Fabricius) are described for the first time along with notes on nidification and biology.  The larvae differ from other Scarabaeinae species in the structure of raster on tenth sternum with two irregular bunches of serrations ventrally one on either half.  Pupae with pronotum transverse having rounded margins resemble adults, and consist of four lateral, single caudal and single pteronotal support projection.  Adult males and females differ in coloration, structure of pronotum, presence of spine like process on mesosternum and, in the structure of male and female genitalia.

Beetles belonging to family Scarabaeidae are commonly called as ‘Scarabs’ and their larvae are known as white grubs.  Arrow (1931) provided detailed account of Indian Scarabaeidae.  The monotypic Scaptodera rhadamistus (Fabricius, 1775), was previously cited as Liatongus (Paraliatongus) Reitter under tribe Oniticellini of subfamily Scarabaeinae (Hanski & Cambefort 1991; Philips 2016).  Larvae of different stages and adults forage by clearing  excrement (Arrow 1931).  Adult males of S. rhadamistus are attractive owing to the coloration and structure of pronotum.

Much of the literature available relating to scarab beetles are on adult taxonomy.  Information regarding their immature forms and nest-building behaviour is deficient (Ritcher 1966; Veeresh 1980; Sreedevi & Tyagi 2014).  Studies on natural history of dung beetles of the subfamily Scarabaeinae lack the information on S. rhadamistus (Halffter & Matthews 1966).  The objective of this study is to present an account of larval morphology and nest-building behavior of S. rhadamistus, a commonly found scarab in central Indian region, based on a study conducted in and around Nagpur-Wardha forest areas.

Species diagnosis: In life, adults are yellowish-orange with metallic green colored patches present on dorsal and lateral regions, elongate, oval; 13–15 mm in length and 6–8 mm in width.  Males have a prominent pronotum with elevated margins forming deep cavity at middle, anteriorly forming a short process that reflexes backwards distinguishing this species from other species of the same genus.  Males and females differ in size and structure of pronotum, and in structure of spine-like process on mesosternum.  Females are smaller, with simple pronotum.

Adults and brood balls of S. rhadamistus from open grazing fields of Kavdas Village and nearby areas of Wardha District, Maharashtra were collected.  This region lies on the periphery of Bor Wildlife Sanctuary.  Field-collected brood balls were maintained in the laboratory at temperature and relative humidity of 270C ± 20C and 65–75 %, respectively (Hayes 1929).  Morphology was described from five specimens, each of III Instar larvae, pupae, and adult males and females.  Larvae were kept in boiling water for about three minutes, followed by cooling, and preservation in 70% alcohol or glycerol to prevent shrinking (Ritcher 1966).  Leica S8APO stereoscopic microscope was used to study the morphological characters, for photography, and for morphometry.  Terminology of Edmonds & Haffler (1978) was followed.  Adult specimens were washed in soap water to clear dirt, rinsed in clear water, air-dried to remove the moisture, oven-dried for about two hours, labeled, and studied.  Arrow (1931) was followed for morphological characterization.

Male genitalia were dissected out from the adults under stereoscopic microscope.  Individual male genitalia was further boiled in 10% KOH solution, washed in water, treated with glacial acetic acid for two to three minutes, and rinsed in distilled water.  The dissected genitalia were stored in 1ml eppendorf filled with glycerol for future reference.

Brood balls of smaller diameter and dried from outside contained malformed and/or dead larvae whereas those moist from outside contained healthy larvae and eggs.  When a hole is made in moist brood ball with the help of a needle, the larva present inside eat the dung present in ball and seal the hole with the excrement.  Larvae were unable to fill the holes when the punctures were bigger.  Centipedes were found to occupy the brood balls after the adult emergence.

S. rhadamistus build nests in large undisturbed dung pats.  Brood count of 3–7 brood balls at a time, per pair of adults of S. rhadamistus is considered less in comparison to other scarabs.  Investment of energy in parental care may be a reason for smaller brood.  Brood balls as well as females guarding the brood balls signifies the importance of parental care in this species.  Diameter of the brood balls as well as the moisture content plays important role in the development of S. rhadamistus.  These aspects of life history are important for conservation of the species. 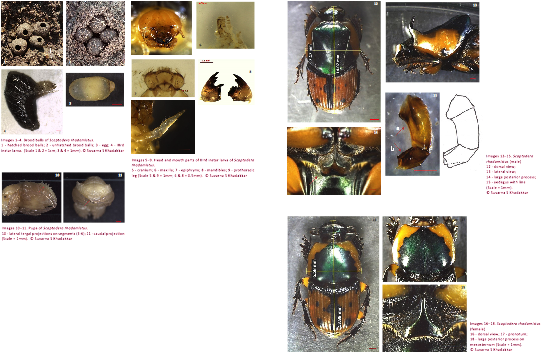